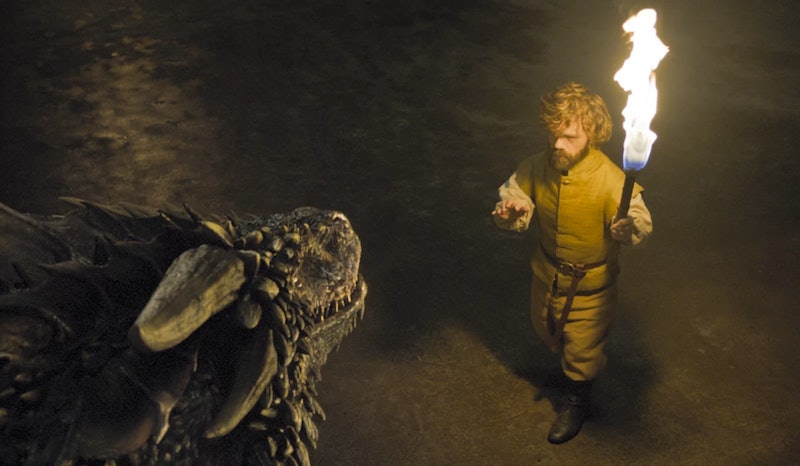 There are a lot of theories out there about Jon Snow’s parentage. Most people can agree that Lyanna Stark and Rhaegar Targaryen are probably Jon Snow’s parents. Some other theories speculate that Jon’s father is Robert Baratheon — he was engaged to Lyanna, after all. And, some more outlandish theories suggest that Jon had a twin sister, Danyaerys or Meera Reed. Whatever the twist, fans are hoping for answers in upcoming Game Of Thrones Episode 9, “Battle of the Bastards,” airing Sunday, June 19. Considering House Stark has been mounting an army, a plot surrounding a battle between bastards Ramsay Bolton (formerly Snow) and Jon Snow is the most likely exposition for the episode. But, is there another “bastard” we should pay attention to in the episode? Could we learn something surprising about who Tyrion’s own parents are?

There’s a pretty major theory suggesting that Tyrion is not actually a Lannister, but the son of Aerys Targaryen, the Mad King. Aerys was known to have a thing for Joanna Lannister. Tywin really hates Tyrion. It all adds up. This would make Tyrion Danyaerys' brother, and possibly Jon Snow’s uncle. But, why could we expect hints about Tyrion’s parentage in the aptly titled episode? Because there was already a pretty major sign about Tyrion’s dragon blood this season. In the episode “Home,” Tyrion fared suspiciously well with Dany’s dragons. He is also in Dany’s world now, so fans are just waiting for more revelations.

A discovery about Tyrion and or Jon’s Targaryen roots would also connect these major characters in support of another theory. It’s been said on the show that a Targaryen alone in the world is terrible thing. But, what if the dragon has three heads? What if there are three surviving Tagaryens, Dany, Jon, and Tyrion, who can join forces? Together, the Targaryens, with ties to other powerful houses like the Starks and the Lannisters, can take back Westeros.

I’m not saying that “Battle of the Bastards” won’t obviously feature an epic battle between House Bolton and House Stark led by bastards. Or, that the episode won’t reveal a much anticipated flashback from Bran revealing Jon Snow’s true mother and father. I just would pay attention to Tyrion’s screen time, should he have any, and consider if there are any other hints at his Targaryen lineage.

Whatever happens in Episode 9, we better be emotionally prepared. Because the closer we get to the season finale, the more intense — and usually devastating — the show gets.