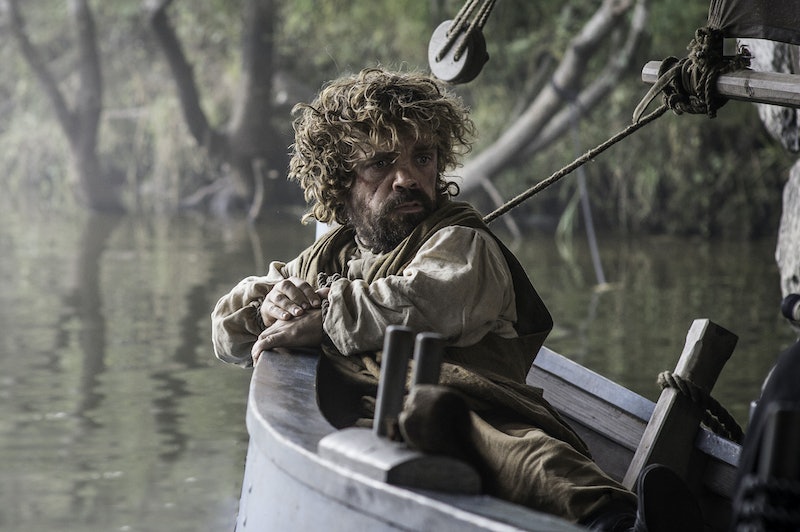 It's well known in the Game of Thrones world that all men must die, but that'd be a real bummer of an ending for the popular television series. The end of Game of Thrones is still awhile away, but it's expected that the many disparate threads of the story will all come together in a grand finale. Now is the time in the show where the writers will begin hinting at how the story will end, and there's one theory — or really, a super-theory — that could predict how the show will conclude. And it all comes down to Tyrion Lannister being a Targaryen. But, what would that mean for Game of Thrones ?

Book spoilers ahead: A popular fan theory claims that Tyrion is not a Lannister, but in fact one of the last Targaryens alive. In the episode "Home," Tyrion confronts Daenerys' dragons (minus Drogon), and fares far better against them than almost anyone else. Tyrion told them about how he used to dream of dragons, sharing that even in his youth he yearned to see one. This seems to be an awfully big clue to the "Tyrion is a secret Targaryen" theory. However, three secret Targaryens don't do much good if they're separated. Which leads to what is possibly the ultimate Game of Thrones theory, known to fans simply as "The Dragon Has Three Heads."

The theory implies that Dany, Jon Snow, and Tyrion are going to join forces, hop onto one of the three dragons, and... do something, presumably. It's not clear what the final outcome of the theory is, but since the book series is called "A Song of Ice and Fire" it's not unreasonable to assume that this will all end in a massive dragon vs. White Walker showdown. Daenerys is interested in ruling Westeros, Jon Snow is interested in protecting Westeros from the White Walkers, and Tyrion is kind of doing his own thing but would likely take the opportunity to ride a dragon into battle given the opportunity.

The theory comes from Daenerys' vision of her older brother in A Clash Of Kings during her visit to the House of the Undying. There, she witnesses her older brother, Rhaegar Targaryen, and his wife, Elia Martell, looking down at a baby named Aegon. Rhaegar then says "He is the prince that was promised, and his is the song of ice and fire." That sentence alone has led to numerous fan theories about parentage and lost Targaryens, but what follows may be the sentence that predicts the end of the series. "[Rhaegar] appears to look at Dany then, as if seeing her, and then he adds that 'There must be one more,' and 'The dragon has three heads.'"

It's believed that the child Rhaegar was holding is the now-deceased Aegon Targaryen but, the prophecy still holds true. If the series is the Song of Ice and Fire, it must end with a "dragon" — or in this case, a united Targaryen front — that has three heads.

While visiting the house in the show, Dany sees images of The Wall, The Great Hall, and a tent with Khal Drogo and their deceased child inside. These visions supposedly correspond to the three heads of the dragon. The Wall represents Jon Snow, the tent represents Dany, and The Great Hall represents Tyrion. Tyrion's supposed secret lineage means that he'll finally be able to have a dragon in the way he always dreamed of, and will be able to take power over Westeros in a way that he was always deemed unfit for due to his status. It also could mean an end to the White Walkers, and the removal of a need for people to participate in The Night's Watch, the return of a Targaryen rule in Westeros, and a thousand other smaller events that could ripple out from those major occurrences.

The "Dragon Has Three Heads" theory relies on many other theories about Game of Thrones being true, as well as a prophecy within the world of the show. However, as other prophecies continue to come true, including the prophecies of Maggy The Frog and Melisandre's leech-burning finally killing off Balon Greyjoy, there's no indication that fans won't see the three-headed dragon in some form. Whether that form is in the popular Dany, Jon, and Tyrion incarnation, or whether one of those characters is swapped out for the possibly Dragon-warging Bran (remember when the Three-Eyed Raven said, "You'll never walk again, but you will fly", anyone?), possible Jon Snow twin Meera Reed, or another Targaryen that could pop up out of nowhere.

It's nearly impossible to try and predict how Game of Thrones will go, but the idea of Tyrion, Jon Snow, and Dany soaring over the wall to taking down the White Walkers astride giant dragons sounds like the perfect way to solve the White Walker problem and conclude the series.

More like this
Emilia Clarke Shares More Details About The New 'Game Of Thrones' Series
By Maxine Harrison
Twitter’s Reaction To HBO’s ‘Game Of Thrones’ Jon Snow Spinoff Idea Is Chaotic
By Stephanie Topacio Long
Did *That* Character Really Die In The 'Stranger Things' Season 4 Finale?
By Grace Wehniainen
'Stranger Things' Fans Are Begging For Steve To Live For The Funniest Reasons
By Grace Wehniainen
Get Even More From Bustle — Sign Up For The Newsletter