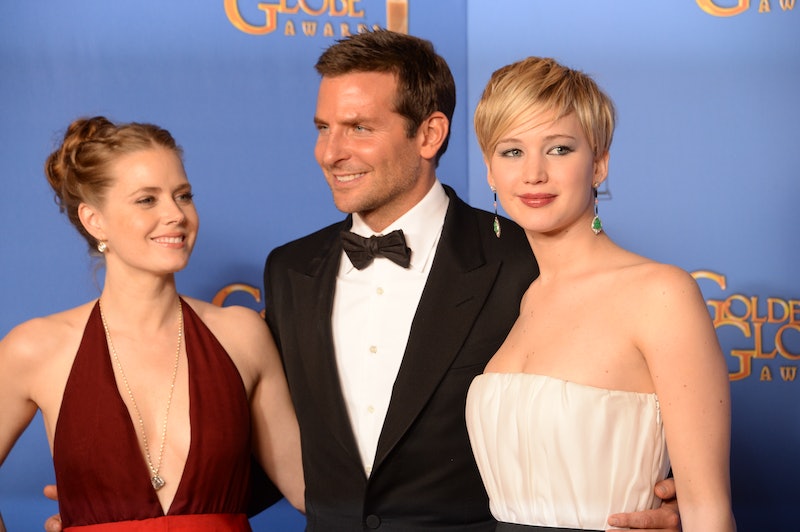 We've all heard it: stars, they're just like us. Even the top actors in Hollywood have to feed parking meters, go grocery shopping, walk their dogs — oh, and fight for equal pay. Gender inequality, it turns out, is just as rampant in Hollywood as it is everywhere else. In late 2015, the Sony Hack revealed that Jennifer Lawrence and Amy Adams were paid less than their male counterparts — Bradley Cooper, Christian Bale and Jeremy Renner — on the film American Hustle, kickstarting a new wave of conversation about the gender pay gap in Hollywood. And on Equal Pay Day, it's important to recognize that fair wages are necessary for stars, too; celebrities may be privileged in many ways, but they aren't immune to inequality.

As the magazine reports, 21 male actors made at least $20 million in 2015. That's five times more than the only four women who made $20 million or more that same year. And yes, it's true that these numbers are complex. The yearly earnings calculated by Forbes include revenue earned from endorsements, producing credits and other miscellaneous business ventures that vary from individual to individual. But that just adds to to the gap; Jennifer Aniston, for instance, who earned the fifth spot on the list of highest paid female actors, made quite a bit of her $16.5 million from endorsements. By comparison, the fifth highest paid male actor, Adam Sandler, who made twice as much as Aniston, earned his money predominantly by entering in a four-picture deal with Netflix. In other words, the man ended up on the list mostly because of actual film work, whereas the woman landed on the list primarily due via other jobs.

Although it can't be known for sure whether this is due to a lack of acting roles for women, the fact that there are so few parts available for female actors (a 2015 study by the Center for the Study of Women in Television and Film found that women made up just 12% of protagonists in 2014's top-grossing films) definitely isn't irrelevant. And the knee-jerk reaction that female actors should just be better negotiators (or hire better agents) to get more roles and earn more money has little merit when you consider the facts. Hollywood negotiations deliver offers based on previous earnings, and because women consistently earn less than men, they will continue to earn less because studios base an actor's worth on their previous salary. Negotiations for female actors also suffer from the lack of opportunities. A study from the Geena Davis Institute on Gender in Media conducted with USC, for instance, found that 31% of all speaking roles in films made from 2010 to 2013 across the globe were given to women, with only 23% of films featuring female leads.

In many ways, the gender pay gap in Hollywood can be considered a result of the low amount of women behind the scenes as well as the small number of female roles. Less roles means more competition, which results in women settling for less than their male counterparts. Reflecting on her experience being underpaid for her work in American Hustle in an interview with GQ , Amy Adams confirmed that negotiations are a small part of a larger problem. "I knew I was being paid less and I still agreed to do it because the option comes down to do it or don't do it. So you just have to decide if it's worth it for you. It doesn't mean I liked it," Adams said. An agent, who spoke anonymously to Cosmopolitan.com in February, echoed Adams' point, saying that if the star's co-star Lawrence would have turned down the final offer she ended up accepting, she would have likely been replaced by another female star. "Women all across the board are just not valued," the agent said. Even Meryl Streep, the undisputed queen of acting, has said that she's sometimes gotten paid less than her male co-stars.

The lack of roles in Hollywood is even more pronounced when it comes to women of color, or women over a certain age, causing a perpetual cycle of pay discrimination. With little opportunity of becoming huge celebrities with clout in Hollywood like a Leonardo DiCaprio or Bradley Cooper, women, especially those of color, have less leverage as a star to negotiate pay. As the agent told Cosmo, "Well, who's a high-level star? It's a white guy. You don't have a lot of African-American high-level stars."

Even when women are afforded similar pay as their male counterparts, an instance of equal pay does little to rectify the imbalance of opportunity. For example, it was reported that Scarlett Johansson was paid about the same amount as Chris Hemsworth and Chris Evans for her work in Avengers: Age of Ultron. However, her character Black Widow has yet to headline a movie of her own, despite the fact that she is one of the longest standing leads in the Marvel Cinematic Universe. Hemsworth and Evans, meanwhile, have both starred in their own superhero franchises. At this point, it seems that we'll never know how much Johansson might make headlining her own movie, because a Black Widow movie is still not in Marvel's timeline of upcoming films.

The pay gap in Hollywood is a self-fulfilling prophecy, and it's not going to disappear overnight. But as long as viewers continue to champion for more diversity onscreen and behind the camera, we might just have a chance to change it for the better.