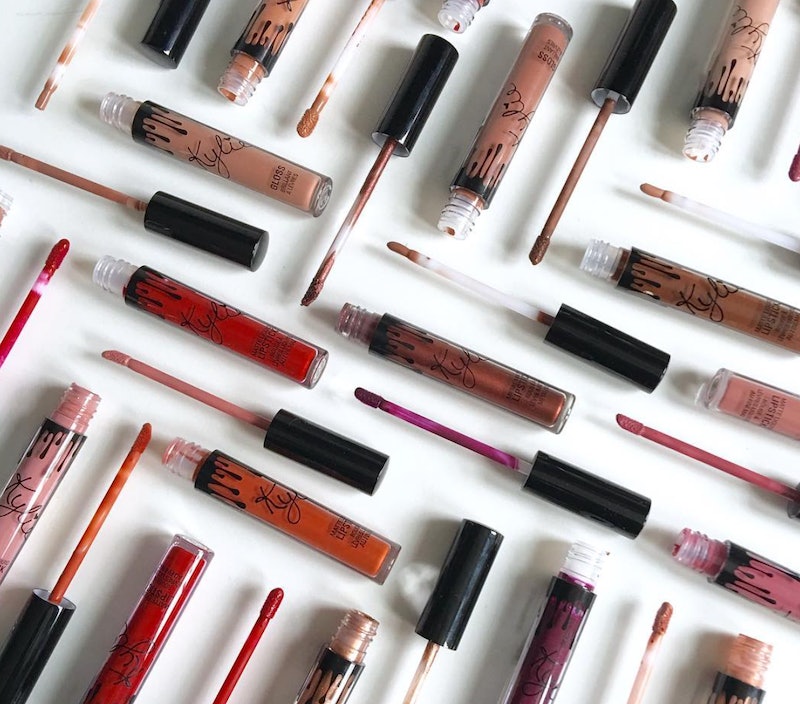 Restock alert! Kylie Jenner confirmed that her brand new, ultra black and mega matte Dead of Knight Lip Kit would makes its grand debut on Friday, June 10. Yes, Dead of Knight is going on sale for the first time ever, while the blue x black x silver KyMajesty Metal Matte, which was teased before DoK, remains TBD when it comes to the release date. But what about the other previously released Metal Mattes —Heir, King K, and Reign? When and at what time can you shop Kylie Jenner's Metal Mattes in neutral shades again?

Well, the makeup mogul and her Kylie Cosmetics brand have been restocking their best-selling products on the regular, making them much easier to get than ever before. Sometimes the restocks feature all of the Lip Kit shades. Other replenishments boast just a handful of hues. Sometimes it's a mix of formulas, from the mattes to the Kylie Glosses.

Actually, try not to hyperventilate to the point of needing an oxygen mask over this additional spot of good news: All of the Kylie Cosmetics lip products, including Lip Kits and Kylie Glosses, will go on sale this Friday. It's going to be a Kylie Lip party, yo!

That's lip product heaven right there! Don't you want to dive right in? I've grabbed multiple KLK shades and all of the glosses, but I've not yet tried the Metal Mattes. Perhaps tomorrow will be my lucky day and I'll take the plunge and purchase.

You will definitely want to get a head start by opening a browser window to the Kylie Cosmetics site at 4:25 p.m. ET and have your credit card ready to shop your lips off before heading into the weekend.

The brand confirmed the June 10 restock on its official Instagram, while Jenner also confirmed the debut on-sale of Dead of Knight on her app and website, which are the official hubs of information about Kylie Cosmetic restock plans.

This restock looks to be huge, with a plentiful supply of shades and formulas. You can totally stock up... if your Internet connection and your hands are fast enough to fill up your cart.

Remember, the Metal Mattes are $18 a piece and aren't sold with an accompanying lip liner like the KLKs.

Back and better than ever tomorrow!