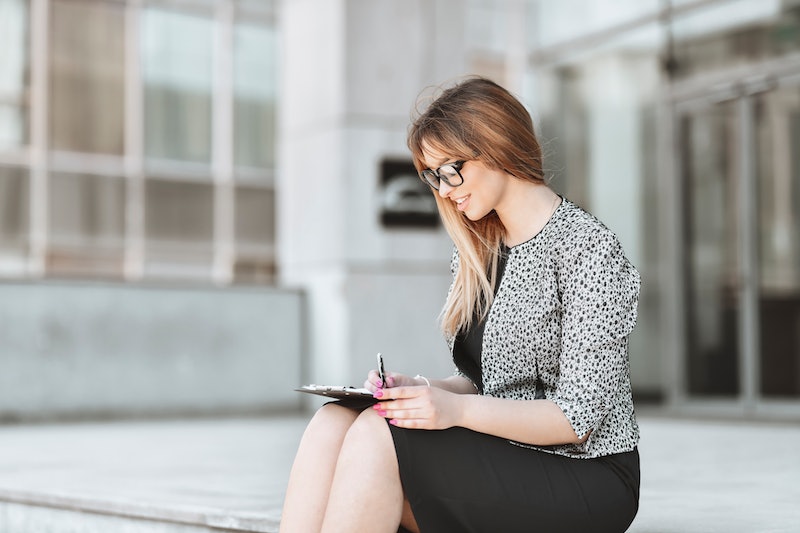 A lot of people (including me) sometimes make it sound like finding the courage to go to a doctor to talk about your mental health problems and get a diagnosis is the final big step in getting a handle on your mental health. But sometimes, getting into that doctor's office is not the end of the road, but the beginning of the second leg of your journey — because sometimes, getting a correct mental health diagnosis takes a few tries. Though there aren't many hard statistics available on how many people get incorrect initial diagnoses when they seek mental health assistance, it definitely happens — especially with certain specific mental health disorders (like bipolar disorder) which have some symptoms in common with other disorders, but must be treated with different kinds of therapy or medication.

Misdiagnosis can happen with any mental health disorder, though — for instance, a 2012 article in Current Psychiatry quoted studies that found that "26% to 45% of patients referred for ‘depression’ did not meet diagnostic criteria for a depressive illness." Similarly, a 2009 meta-analysis of 50,000 patients published in The Lancet found that general practitioners only correctly identified depression in patients in 47.3 percent of cases, with many doctors diagnosing depression in patients who did not actually suffer from it. And some cultural groups tend to be misdiagnosed more often that others — according to the National Alliance on Mental Illness, "research studies have shown lack of cultural competence in mental health care [which] results in misdiagnosis and inadequate treatment. African Americans and other multicultural communities tend to receive poorer quality of care." And while an accurate diagnosis can be the first step in getting healthy, a misdiagnosis can set us back, and cause a lot of unnecessary suffering.

A misdiagnosis is different, of course, from an accurate diagnosis that you just aren't ready to hear right now. I am an personally a lay expert in this field — I was initially tentatively diagnosed with ADHD as a teenager, but basically refused to hear it until my late twenties. But sometimes, because of our own research or simply due to the experience of living in our own bodies and minds, we have a feeling that an initial diagnosis is wrong. If you experience this, you shouldn't be afraid to look for a second opinion, or a doctor who takes your own personal experiences of your symptoms seriously. Getting mental health help can be absolutely life-changing — but only if you're getting the right treatment for the right actual issue.

Read on for five of the most commonly misdiagnosed mental health disorders.

People with bipolar disorder typically first seek treatment while having a depressive episode, which often leads to the disorder being misdiagnosed as depression (unipolar depression); conversely, people with bipolar disorder who are currently dealing with a manic episode may have their symptoms, such as restlessness and insomnia, misdiagnosed as ADHD. Diagnosis can also be difficult for people who are experiencing bipolar disorder but whose presentation of symptoms looks slightly different from the standard diagnostic criteria on issues such as duration of hypomanic states.

Misdiagnoses can be especially dangerous here, because getting the incorrect treatment can actually worse the problem — for example, antidepressants used to treat unipolar depression can sometimes make people with bipolar disorder feel worse.

BPD is a complex disorder that has symptoms similar to many other mental health disorders — and many mental health professionals have not had a lot of exposure or education on BPD, so it's easy for them to mistake it for something else. Symptoms like impulsive behavior or mood swings may be misread as signs of ADHD or bipolar disorder, according to the UK's MInd.org, while issues like feelings of disconnect from others can be misread as PTSD or depression. BPD is very commonly mistaken for bipolar disorder, because both disorders involve shifting moods and periods of depression.

Again, you absolutely can struggle with both BPD and PTSD, or BPD and anxiety — but it's important for doctor's to understand the full picture in order to help you receive the correct treatment. BPD treatment usually involves very specific kinds of therapy, rather than a specific medication, so a correct diagnosis is incredibly important in making sure that you get the correct kind of assistance.

Though many studies point to the fact that ADHD itself is often diagnosed in people who don't suffer from it — according to a Michigan State University study, primarily among children who are simply having age-related difficulties focusing or acting maturely — in adults, it often goes the other way around: because so many people (including some mental health professionals) don't think of ADHD as a disorder that impacts adults, many ADHD symptoms (like racing thoughts or mood swings) are misdiagnosed for another common mental illness.

This also goes for symptoms that are the result of living life without proper ADHD treatment — for instance, social anxiety that has developed from a lifetime of having trouble with social interactions due to ADHD-related issues can be misread as simply being a product of generalized anxiety disorder; similarly, low self-esteem and stress due to ADHD can be misread as depressive disorder.

Not to say you can't suffer from both anxiety and ADHD or ADHD and bipolar disorder, of course. But as ADDitude, a magazine for people coping with ADD/ADHD, notes, "Many of the less-known symptoms of ADHD — working memory and executive function deficits, difficulty sleeping, and irritability, for example — also show up with depression, autism, anxiety, and other brain-based conditions," leading doctors to have trouble properly diagnosing ADHD. And women in particular often have a hard time getting diagnosed for ADHD.

PTSD is, according to the American Association of Marriage and Family Therapy, "a psychiatric diagnosis for people who have endured a highly stressful and frightening experience and who are experiencing distress caused by memories of that experience." But while PTSD is a unique mental health issue, many of its symptoms — like anxiety, emotional numbness, risky behavior, intensely fearful and risk-averse behavior, and inability to sleep — can make it seem as if the patient is struggling with a different mental health problem. This is especially true if the doctor examining the patient doesn't have any experience treating PTSD.

In fact, incorrect diagnoses for people grappling with PTSD are tragically common. According to an NBC News report, between 2005 and 2007, the Army dismissed roughly 1,000 soldiers each year because a psychological evaluation found that they had a personality disorder (a status which left them ineligible for military health care and other benefits); a change to policy in 2008 that required a top-level review to rule out PTSD as a cause in every personality disorder dismissal caused that number to drop to roughly 260 a year. And according to the National Alliance on Mental Illness, "African American men are more likely to receive a misdiagnosis of schizophrenia, when expressing symptoms related to mood disorders or PTSD."

Because it is unique, and because every patient needs a different treatment, it's also key that PTSD is treated by a mental health professional who is knowledgeable about the disorder, rather than by a doctor who only has a background in treating more common mental health problems.

Frequently Misdiagnosed As: depression, nothing.

According to the Anxiety and Depression Association of America, "Anxiety disorders are the most common mental illness in the U.S.," impacting 18 percent of Americans. However, despite this, it can take people struggling with anxiety disorders an incredibly long amount of time to be properly diagnosed — according to Robert Leahy, Ph.D., a clinical professor of psychology and psychiatry at Weill Cornell Medical College, speaking to Glamour, "The average length of time between the onset of symptoms—the time a woman starts feeling bad—and when she gets actual diagnosis is between nine and 12 years."

Many people don't understand that their anxiety symptoms indicate a mental health problem — they just think of them as "part of life," and thus simply don't think to see a doctor. But even when people with anxiety see a doctor for diagnosis, they aren't guaranteed a correct diagnosis — some anxiety symptoms, like sleep issues and inability to concentrate, can also be signs of depression, leading doctors to make the wrong call.

What Can You Do If You Think You've Been Misdiagnosed?

Researching and seeking out a doctor when you're suffering from a mental health problem can be grueling, and the process of finding and researching a new psychiatrist or therapist after you've already found can feel overwhelming. But if you think you're not getting the proper treatment, or feel that you would work better with a different mental health professional, you owe it to yourself to get a second opinion.

If you need help finding another doctor or therapist, you can call the mental health hotline tied to your insurance plan to find doctors in your area covered by your plan; you can also consult an online resource of mental health professionals, like Psychology Today's therapist locator, or a counselor directory on a site like Good Therapy. No matter what, try to not get discouraged, and not give up — getting an accurate diagnosis is worth it.

More like this
Ashley Benson Revealed The Whole-Body Effects Of Her Anxiety On TikTok
By Stephanie Topacio Long
11 Health & Wellness Gifts Any Fitness Devotee Will Appreciate
By Rachel Lapidos
This Company Will Send STI Tests Right To Your Door
By Lexi Inks
The 5 Best Pillows For Acid Reflux, According To A Sleep Expert
By Maria Cassano
Get Even More From Bustle — Sign Up For The Newsletter