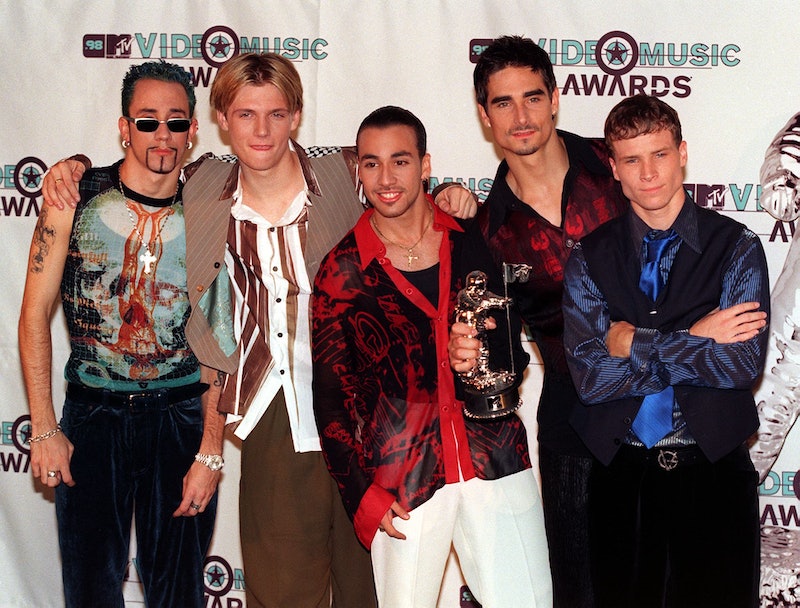 I don't care who you are or where you're from, if you grew up in the '90s, you knew who the Backstreet Boys were. Beginning in the mid-'90s, the boy band sang a myriad of pop ballads, R&B soul-stirrers, and dance hip-hop, and as a result, they became cultural icons. I, personally, grew up with BSB after seeing my older sister's obsession with the band, and checking them out myself when I was a tween. Twenty years later, that obsession has not died, and it is one of the engrossing emotions that prevails as I listen to the Backstreet Boys as an adult.

In the last two decades, the Backstreet Boys have sold more than 100 million albums, making them one of the biggest-selling supergroups of all time. As I sit here writing my memories of a group I obsessed over since I was a child (while currently wearing my 2014 "In a World Like This" tour T-shirt, of course), it's unsurmountable not to mention the mere excitement the band still brings to anyone who desired to have a walkman back then. As an adult, listening and re-listening to their best albums from Backstreet Boys to Millennium to Black & Blue to In a World Like This only strengthens their story and my love for such a powerhouse group. However, it goes without saying, there are many things that I misunderstood about BSB as a child.

It's only best then to unravel all my epiphanies of revelling in the devotion alongside this band, nearly two decades later. So, without further delay, here are 11 things you realize when you re-listen to the Backstreet Boys as an adult.

1. Many Of Their Songs Were Super Dirty

My pre-PRE-pubscent self would not be able to tell you a single lyric that hinted at any sexual innuendoes throughout the accumulation of the Backstreet Boys illustrious music career. But, as an experienced adult, BSB definitely liked to "Get Down," if you know what I am saying. The boys cultivated an entire repertoire of words based primarily on enticing an audience, and without a doubt, it worked.

2. "I Want It That Way" Doesn't Actually Have A Real Meaning Behind It

Have you ever really listened to "I Want It That Way"? I mean, reallly listened? Because really, what does this song mean?!

Not to sound all English teacher, but what is "it"?

How is the "that" different from the "it" you and I said? My head hurts, seriously. "Ultimately the song really doesn't really make much sense," Kevin Richardson admitted to LA Weekly in 2011. As it just so happens, the iconic BSB track was co-written by Max Martin, a Swedish songwriter whose long list of hits like "Oops!...I Did It Again," "Since You've Been Gone," and even, "Everybody (Backstreet's Back)," have increased his credibility. "His English has gotten much better, but at the time..." Richardson reveals, it may have been hard to say. Not to worry though, the song actually has an additional version with lyrics that make you not question your love or the intelligence of this boy band ever again.

3. They Still Have The Power To Captivate You With Their Sensual Eyes And Dance Moves

It's hard to not be enthralled with BSB's ability to look into a camera lens and sing directly to you. Umm, hello, swooonnn. During their infamous Rolling Stone interview in 1999, when asked about their reaction to young girls shaking and crying during meet-and-greets, Brian sweetly remarked, "I'll say, 'I'm human, it's no big deal.'" said Littrell. Notwithstanding, it seems extremely difficult to get over these uber-aware men who to this day can make any girl feel incredibly special with their body rolls and crazy "bedroom eyes."

In 1999, the upbeat, bass heavy track, "Larger Than Life," was released off of BSB's Millennium album. Though, it was the first instant hit that gave a behind-the-scenes look at the band's darker brushes with fame. Despite the band's maintenance of a clean-cut image, what wasn't exactly known is the authentic stories of the boys' past. The true messages the band wanted to send with this song actually addressed the harsh "prices of fame" that can often be overshadowed by the glamorous lifestyle.

No, seriously. Has anyone EVER given BSB the answer that stemmed from this decade-spanning question, "Tell me why"? Guys, let's help them out.

6. The Music Video For "Everybody (Backstreet's Back)" Is Still Scary As Hell

I don't care what anyone says, ever since I saw "Everybody (Backstreet's Back)," I have been scarred for all of eternity. Nick wrapped in gauze, Brian as a morphing werewolf, A.J.'s half-burnt face, Howie D's fangs, Kevin's mutating makeup, and a zombie bus driver — I remember crying from fear. That sentiment still remains today, with additional panic and appreciation for such an elaborate haunting evolution.

7. "The Call" Is Actually About Infidelity

When BSB released their single, "The Call," there was a turning point of concern from fans. The song actually has a hidden meaning, behind about cheating. When it came out in February 2001, it brought to fruition a less-likable group that were no longer singing how they would be the ones to love you. Instead, they remarked about the other woman, and targeted it to the same group of people who were charmed by "Shape Of My Heart." Not the best idea, guys.

8. Your Favorite BSB Has Changed Drastically Through Stages Of Adulthood

One of the most moving things about loving BSB is the experience of growing up with them. When I was younger, I was forced to love A.J. because my sisters each chose Nick and Brian for themselves and we could not share. But as a direct result of this, I learned that the bandmate of your choice will inevitably change because of all the struggles each member has gone through, and you yourself have experienced. Many are parents, many have lost relatives, many have struggled with health and addiction issues — but the bottom line is that, despite all of that, the band still remains a group, thriving together. As I aged, I realized how much I indeed had in common with A.J. because of his strength and grace as a human being.

9. You've Been Singing Every Single Song Wrong Your Entire Life

Come on, admit it. You may only recognize it now, especially as adult. But, if you are still in disbelief and think you know all the words to every single song because you are ACTUAL diehard fan, let me just say: "Come on now Backstreet's something, something, nah nah nah nah nah, we got it goin' on for years, ahhhhhh."

10. Reliving The Pain Of Kevin Leaving The Band

When Kevin Richardson decided to leave the Backstreet Boys in 2006, it seemed like the end of an era. Granted, Richardson wanted to find a solo path on Broadway, and that's fine — but no one wanted the band to be a quartet. Of course, reminiscing on this very difficult topic is a nightmare for any true BSB fan, but albums like Unbreakable and This Is Us inflict this pain over and over again. Sorry boys, but we never want to relive that pain every again.

11. The Boys Continue To Never Miss A Single Beat To This Day

Even after what some may consider their prime, the Backstreet Boys have not skipped a single beat in anything they do today. After watching Dead 7 and most importantly, Show 'Em What Your Made Of countless times, I know I will never tire of their talent.

It's clear to me now, more than it has ever been in my 23 years of existence, that I will never stop loving or getting excited by anything Brian, Kevin, A.J., Howie D., and Nick do. They are the Backstreet Boys for heaven's sakes, and they will always take the world by storm.