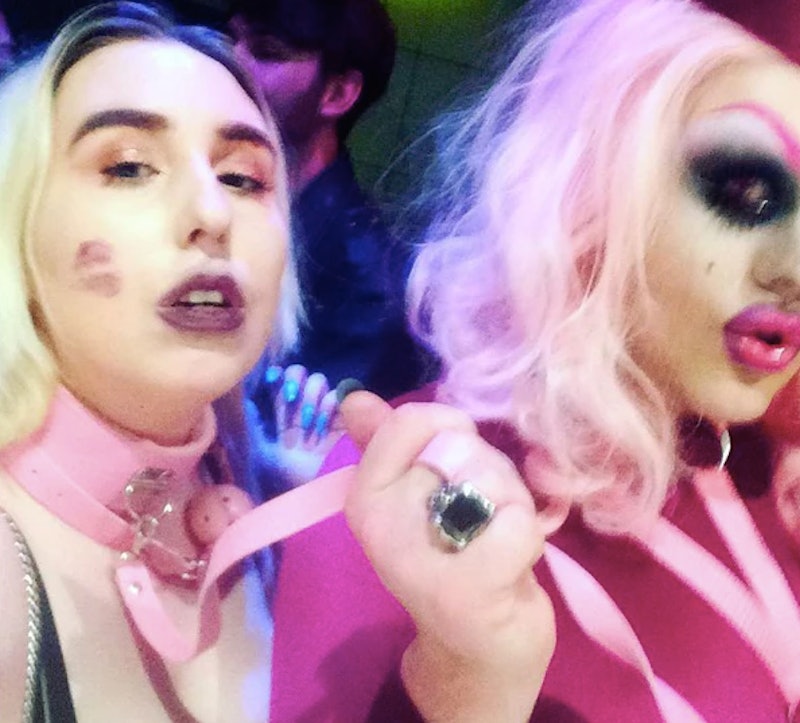 I have always been feminine. But only in the past few years have I called myself "femme." The difference stands not in abbreviation, but in queer coding. Unfortunately, many folks outside of the queer scene don't fully understand what femme means or recognize its distinct differences from feminine. But the differences are precisely why the word femme must exist in the first place.

To put it simply, "femme" is a descriptor for a queer person who presents and acts in a traditionally feminine manner, as explained by feminist media site Autostraddle. This might be a cis pillow princess, like myself, an asexual trans woman, or a gay non-binary individual, but all femmes hit upon two key aesthetic and identity-related traits: Being feminine and falling somewhere on the LGBTQ spectrum.

There is also a sense of reclamation when it comes to the femme descriptor. For many, it's about owning the stereotypes and expectations so often placed on women and making them our own. As Evan Urquhart wrote for Slate in 2015, "Intentionality is the key to distinguishing a femme identity from a traditionally feminine one."

Urquhart's point is that being femme isn't about acting feminine or "girly" in the ways mainstream society generally feels that female-presenting people "should" act. Instead, it's about subverting the expectations that women face purely for being women. This is why you will often see femme-identifying people presenting exaggerated versions of femininity over traditional, cookie-cutter, or preppy ones.

For me, using the word "femme" over the descriptor "feminine" is a key component in claiming my queerness. It's a queerness that has often, because of my bisexuality, been erased. This experience is one lived by many queer women and has arguably been discussed more and more with the rise of the internet, including a Twitter campaign by Huffington Post in 2014 that resulted in the hashtag #WhatFemmeLooksLike.

In 2012, queer and relationships blogger Sinclair Sexmith explained femme invisibility succinctly in a post, with no beating about the bush, noting:

"Femme invisibility is a real thing. It happens all the time. Queer women who are feminine get seen as straight — by straight folks, other queer folks, and sometimes even queer femmes themselves — because this culture expects dykes to reject gender roles automatically when rejecting a heterosexual orientation. As if those two things go together inseparably."

What's important to conceptualize about this quote and the narrative that it is fighting against is the division between gender and sexuality that is, actually, an important one. Although gender and sexuality can be undeniably and intrinsically linked, they are not one and the same. What we identify as and who we are attracted to are two separate constructs, and how we present ourselves physically often has little to do with who we are attracted to.

In Urquhart's same Slate article, a friend summed up the contrast of being interested in women and appearing feminine perfectly: "Being femme is about being authentic to what I actually like and how I actually want to appear, in spite of what my sexuality leads people to expect."

If we expect women who like women to present as butch and men who like men to present as feminine, we inadvertently reinforce gender binaries. This is not a slight against butch women, feminine men, or anyone in between, but rather a critique of the expectation so many people feel to fulfill these roles based on their sexuality.

In a comic for Everyday Feminism, artist Anna Bongiovanni explained the privilege in this binary: "We live in a culture that celebrates masculinity and demonizes and shames femininity and those habits don't go away in the queer community."

This promotion of heteronormativity is harmful, though. It erases identities and denies the reality that our identities are complex.

So when it comes to feminine and 100 percent straight individuals contemplating whether they should self-describe as femme, I'd personally suggest steering clear from a word that means so much within a community they are not a part of. Ultimately, "femme" is about braking binaries. It's about subverting cultural expectations. It's about being more than one thing. It's about queerness.

More like this
Instagram & Facebook May Finally Lift Their Notorious Nudity Ban
By Allie Fasanella
Gen Z Are Twice As Likely To Identify As Queer, According To New Data
By Sam Ramsden
What The UK Blocking Scotland’s Gender Recognition Bill Means
By Sam Ramsden
24 History-Making Black Women You Probably Didn't Learn About In School
By Ayana Lage and JR Thorpe
Get Even More From Bustle — Sign Up For The Newsletter
From hair trends to relationship advice, our daily newsletter has everything you need to sound like a person who’s on TikTok, even if you aren’t.