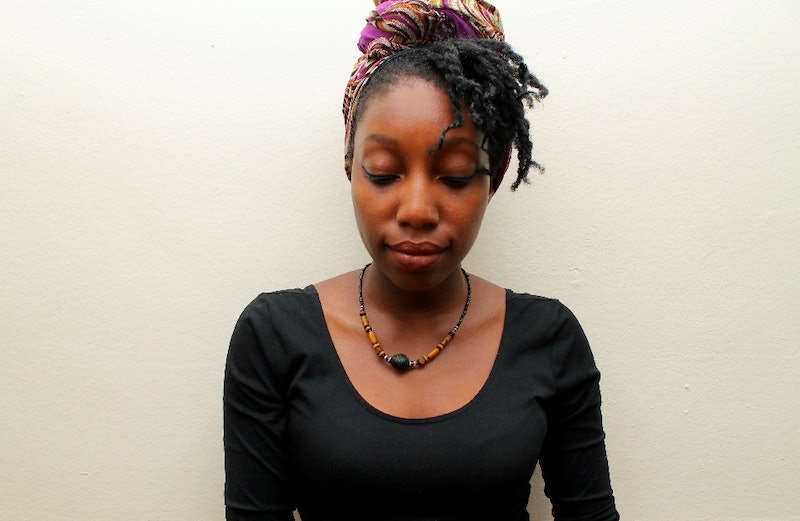 As I was getting ready to go to the store the other day, I paused over my nightstand. There, I kept tubes of liquid lipstick, loose stud earrings, a friend's book I kept forgetting to return, a handmade teddy bear I got in Thailand and a pair of sharp silver shears. I use these shears to trim my hair, but that day, I considered slipping them into my small handbag.

I was only going a couple of blocks to pick up a can of black beans to complete my dinner, but I felt uneasy about it. I am a black woman. I live in a small, quiet suburban neighborhood. If anything happened to me, would anyone hear my screams? Would anyone run out of their homes to see what's up? Would anyone know?

The idea lingered in my mind like a completely rational thought. I ran through my mental checklist: Keys, check. Phone, check. Wallet, check. Weapon...

Earlier that day, I had read several articles on the Brock Turner case — the survivor's powerful statement, the pleading letter written by the rapist's father. I spoke to my boyfriend about the case, the injustice of Turner's six month jail sentence for assault, spitting out words of feminist angst into the phone receiver. I cuddled myself on the couch. I cried. I ate a whole pint of ice cream. I stared at nothing. I thought of the survivor all day long.

I have friends who have been sexually assaulted and sexually harassed, and I thought of them as I read the articles following this story. I felt my own body slip into a realm of helplessness and hopelessness, found myself uncovering the blankets that hid my own assaults.

You know the world is fucked up when a woman considers carrying a pair of hair cutting scissors with her just to walk down the block.

A couple of years ago, I wrote a story about how the plight of police brutality makes it scary for me and my peers to navigate our everyday lives as black people. We have to be mindful of our appearance, our actions and our words in public settings. We have to present our best, most polished selves while outside our homes, overthink our movements and our methods — because it felt like any little thing about us could lead to our death or incarceration if we're in the wrong place at the wrong time.

Now I contemplate how our rape culture affects how I navigate the world as a woman — a woman of color, at that. Growing up, I heard the typical excuses about why a woman got raped — her skirt was too damn short, she shouldn't have been out alone that late at night, she shouldn't have drank that much. As I got older, or shall I say, as my body started transforming into womanhood, growing in ways that I couldn't control but wanted to be proud of, the lessons I learned about rape turned into cautionary advice I was expected to live by: Don't wear short skirts. Don't stay out late. Don't drink too much. Rarely do we teach our boys how to respect women, yet we teach girls these twisted lessons and say we are teaching them to respect themselves. Because at the end of the day, in our culture, rape is our fault, or worse — and the man who raped us won't be punished for it.

I have not gone through what the woman in the Turner case experienced. My heart bled for her as I read her story. But as I read, I also remembered a series of incidents of harassment that occurred in my life from childhood to adolescence. I imagined her story and her pain, and relived moments of my life that left me confused, broken, hopeless. I started to wonder why every female I know has been harassed or assaulted on some kind of level. Assault is not a part of our virtue. We don't pay dues to this life by shedding pieces of ourselves, by having our bodies taken against our will. Yet, it still happens. It happens to all of us.

The first time it happened to me, I was in the fourth grade. I still remember the boy's name; he was a classmate. We were riding the school bus home. I sat next to him, and we talked about the silly things that kids talk about, without a care in the world. He slipped his hand under my butt and started squeezing, grabbing, feeling. He did that for the whole ride — 20 minutes that felt like hours. I didn't say a word about it. He just kept going and we kept talking, about the silly things kids talk about. I felt like I couldn't do anything about it. I couldn't move. I was too young to understand that this wasn't right, that I could say something, that I could stop it.

Justice is not always guaranteed, because sometimes men make mistakes, and sometimes women just happen to be pawns in those mistakes.

The second time was in my neighborhood. I was in junior high school. One day, while walking down the block, a man in his late twenties or thirties stopped me. He asked me for directions, and I was happy to help. We walked down the block together and I asked him where he was trying to go. By the time I realized we had started walking down a secluded, inner street, it was too late. He turned to me. "What if I need to pee?" he asked. Confused, I froze. He unzipped his pants and pulled out his thing. I ran in the opposite direction.

The third time involved a neighbor, a man who lived in my building, also in his thirties. I was still in junior high. I would say hello to him, as I did all of my neighbors. He started complimenting me and following me places. He lingered in the stairways, asked me intrusive questions about my life. Finally, he started writing me love notes, which he left at our door. My parents found out and were furious. They blamed me — why would I say hello him? Why would I be so nice? Don't you know some men can't be trusted? They never confronted him. They only confronted me.

For a long time, I told myself that these assaults, and others I haven't shared, were not that bad. That I could've gone through more painful things, that I know people who have seen and felt greater injustices. I still think this is true. But how long will we force girls and women to endure these kinds of incidents, and consider them just a part of normal life? When will we change our culture, teach boys and men that it is unacceptable to behave this way, that our bodies are not for free to them, that we are not vessels for them to extract their wildest desires and horrors?

The ruling in the Brock Turner case proves once again that the feelings and future of a man — especially a white man — are held in higher regard than the body and life of a woman. This case not only involves a terrifying story, but sends a message to women that assaults on our bodies at the hands of men aren't that bad. Justice is not always guaranteed, because sometimes men make mistakes, and sometimes women just happen to be pawns in those mistakes.

The product of this message? Fear. Now it makes sense to want to carry some kind of protection with me, no matter how small. I don't want to hurt anybody, but more than that, I don't want to get hurt. Because I worry that when worse comes to worst, justice won't be on my side.

We shouldn't feel the need to protect ourselves when we go out. We should be able to live our days freely, without worry about our safety. I know that my desire to carry a pair of scissors was messed up. But what's more messed up is our culture, which made this idea seem reasonable.

I didn't take the scissors with me that day. But as I walked to the store, I found myself involuntarily accelerating into a run. There was so much I was running away from, and so much I wanted to run toward.