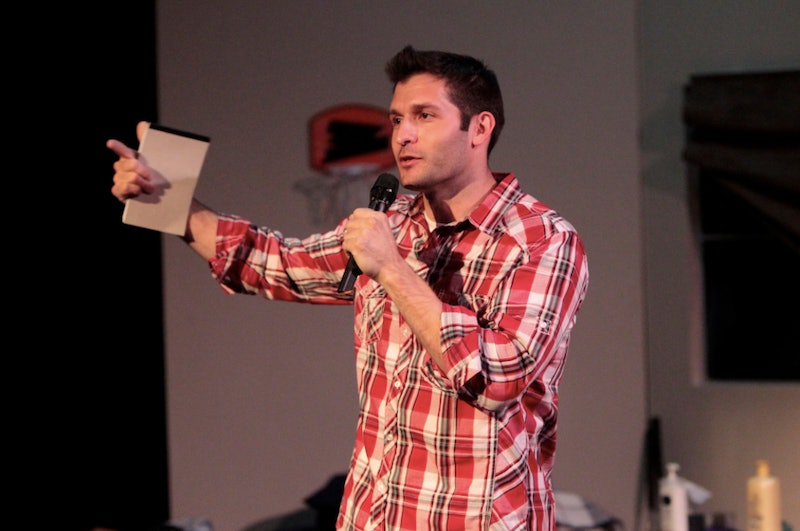 This season of The Bachelorette can be summed up with one word: Chad. Four episodes of JoJo Fletcher's Bachelorette season have aired so far, and I'm more inclined to think of sweet potatoes or someone's shirt getting ripped than I am about love or people unnecessarily jumping off of things, and it's all thanks to this season's villain, Chad Johnson. Naturally, the focus on the deli meat lover, has taken the focus away from all of the contestants (and from JoJo herself), but there are some suitors remaining, who, honestly, we all would have forgotten about anyway. Yet, somehow they are still remain much to Bachelor Nation's surprise.

But it's not just the under-the-radar boring guys who are surprisingly still at the Bachelor mansion, there are some guys who just seem like they either aren't a natural fit for the show or who seemed like they were set up for failure from the beginning. I can think of six suitors of the remaining 13 (Chad not included, although technically he is still on the show... in his way) who I am shocked haven't gone the way of our friends "The Hipster" and "The Guy Who Showed Up As Santa Claus."

Daniel spent the first night explaining the "Damn, Daniel" internet phenomenon to JoJo and he was the only guy to befriend Chad. Seriously, how is he still in the house?

I like Wells and I'm sure he's done nothing to offend JoJo, but he seems too normal to be on this show. The guy wore a jean jacket in his ~official~ Bachelorette cast photo instead of the requisite V-neck. This is not the place for him.

This guy I place firmly in the category of men who are surprisingly still there even though they've gotten no screen time and no one knows who they are. Who are you James F? Please reveal yourself on the next episode, or get to steppin'. (Plus, he wears this shirt all the time apparently!)

Vinny fits the same category as James F. But I am also surprised he is still there because of that haircut. Not because there is anything wrong with it (ehhh...), but because it does not fit the Bachelorette suitor standard of being styled to rise as high into the air as possible. (P.S. He is a barber. ¯\_(ツ)_/¯)

Three words: erectile dysfunction specialist. I know, I know. It's his real job, but it also sorta kinda seemed like he was cast because he had a ridiculous job title, like so many Bachelor/ette suitors past. Gotta give the dude props, he's gotten a ton of screen time and become more than his occupation.

Much like the erectile dysfunction specialist before him, I felt like James Taylor — who was cast on the show as "James Taylor" rather than "James T" — was there because he would play a silly song and was named James Taylor. On paper, he's a walking gimmick, so I expected him to be gone after night one. But nope. Now the guy's a frontrunner. I'm sorry I ever doubted him.

Well, I guess this show teaches me more than what to wear when going from a snowy location directly to a hot tub and how to tweet really fast. I also learn not to judge people too quickly. Bravo, Bachelorette, and thank you. And best of luck to the contestants above who will totally make it to the end. (Shoot! Sorry. Still judge-y.)

More like this
‘The Bachelorette’s Michelle Young & Nayte Olukoya Explained Their Breakup
By Stephanie Topacio Long
Everything We Could Expect In Gabby & Rachel’s Season Of The Bachelorette
By Kadin Burnett
Bachelor Nation's Blake Horstmann Is Dating 'Love Is Blind' Star Giannina Gibelli
By Jake Viswanath and Radhika Menon
The ‘Love, Victor’ Showrunner Gave Fans Hope For A Possible Spinoff
By Brad Witter
Get Even More From Bustle — Sign Up For The Newsletter