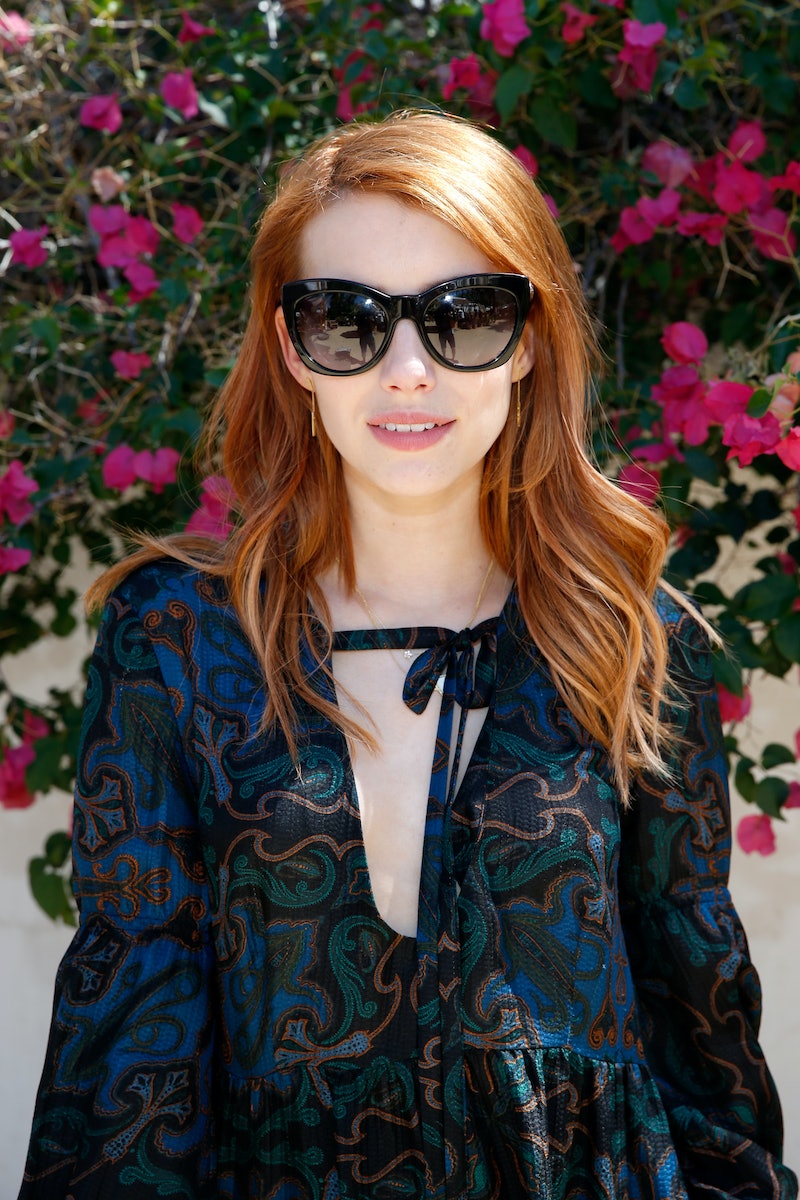 From blonde bobs to red locks and back again, Emma Roberts has been changing it up in the hair department as of late, and that means that fans and foes alike have been sharing their opinions on Twitter. Emma Roberts' new hair, a strawberry blonde bob, while not as dramatic as Bieber’s latest hair transformation, is just radical enough to garner some Twitter love and unfortunately a little bit of hate — or rather, nostalgic longing for her auburn-colored mane.

From the rose gold-colored locks she sported at Coachella in May 2016 to her new middle part bangs reminiscent of Sienna Miller's, the actor can do no wrong in the hair department; and come to think of it, she doesn’t really do wrong in the style department, either. Although many Twitter users are in agreement with me and my love for Roberts’ current hairstyle, there are a few who aren’t thrilled to see her new transformation. As @mortallilly wrote, “Goodbye Emma Roberts red hair, I’ll miss you.”

While Roberts’ look is rather mild in comparison to the recent hair transformations of the moment — think Taylor Swift and Zac Efron — that fact didn’t stop the Twittersphere from commenting on the new ‘do. To see Roberts’ summer-ready locks and to find out what the internet had to say about it, scroll down.

Emma Roberts' blonde bob looks a bit like the one she sported just a few months ago in April before she went red. However, she changed it up a bit by taking a little off the bangs and opting for a strawberry blonde hue.

While I wish the star would keep this look for more than a month, I have a sneaky suspicion that this is just a transitional hairstyle, since Scream Queens starts production in July, according to Just Jared. This likely means that Roberts will be back to Chanel blonde, extensions and all, very soon. Until then, I am loving this short bob, and it seems as though Twitter is, too.

While Roberts' hair will undoubtedly be very long and platinum blonde in no time, this blonde-colored bob is a great look for summer.

User @whit_rutledge was not the only one to think Roberts looks glorious as a blonde; @dobrevmeesters believes the actor should stop with the hair dye and stick with the blonde hue.

Although many of Roberts' fans think she looks great blonde, @brunamatunda noted that the actor can pull off pretty much any hair color.

As for @abitofmary, this user agrees that Roberts looks good in all shades, from blonde to brown to strawberry blonde and back.

Roberts is all about the hair transformations nowadays, but @brunamutunda pointed out that both Roberts and her ex have been enjoying mixing things up in the hair department as of late.

While there has been a lot of hair dye used and many extensions cut, one thing's for sure: Emma Roberts' hair game is, as @CamrynWrites put it, "hair goals."

All in all, it looks like Twitter believes Roberts' new 'do is a success, and I couldn't agree more.