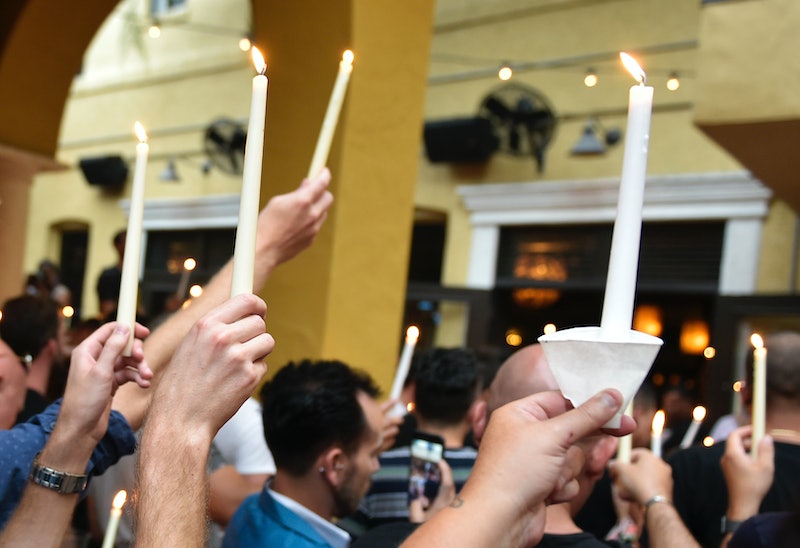 Gun violence has begun to feel a bit too commonplace as the years go by. Before at least 50 people were killed with dozens more injured in a Florida nightclub Sunday, 14 were shot dead in San Bernardino, California, in December of last year. A month before that three were killed outside a Planned Parenthood in Colorado and a month before that nine were killed at Umpqua Community College in Oregon. The list goes on, unfortunately. Yet despite an increase in the frequency of mass shootings, gun control reform continues to remain a largely uphill battle in Congress. However, there are quite a few organizations working to end gun violence right now for those feeling the itch to help after waking up to yet another mass shooting.

A great first step for anyone looking to begin supporting a new cause is always education. Take an hour (or better yet a day) to read the facts about gun violence in America and what each side has to say about the matter. Once you've beefed up on the issues behind the arguments for and against gun control you might think about donating to an organization or campaign aimed at raising public awareness on gun violence and pushing gun control legislation through Congress. There are more than a few notable organizations worthy of your support.

Commonly referred to as the Brady Campaign, this nonprofit is named after Jim Brady, a man shot and left permanently disabled during an assassination attempt on President Ronald Reagan in 1981. The organization takes a three-pronged approach to fighting gun violence. They seek to change laws, change the gun industry, and change culture, according to their website. The group was instrumental in passing the Federal Assault Weapons Ban and Brady's Law, which mandates federal background checks for individuals purchasing a firearm. Currently, the group is lobbying for background checks to be extended to all gun sales.

Made up of a coalition of Mayors Against Illegal Guns, Moms Demand Action for Gun Sense in America, and survivors of gun violence, Everytown For Gun Safety lobbies for gun control legislation on state and federal levels and also provides support services to survivors of gun violence. Their aim is to bring the voices of "everyday Americans" into the fight to build safer communities. They advocate increased penalties for gun trafficking, education on responsible gun ownership and storage, and closing legislative loopholes that allow gun sales without background checks.

You can donate to the group here.

Former Congresswoman Gabby Giffords started Americans For Responsible Solutions with her husband retired Navy captain and astronaut Mark Kelly after she and 18 others were shot while holding a meeting in a grocery store parking lot in Arizona. Both are outspoken about being "strong supporters of the Second Amendment" but seek to end the gun lobby's deep political influence and Congress' inaction on gun violence. Americans For Responsible Solutions seeks commonsense protections like expanded background checks, federal funding for research on the cause and impact of gun violence, and stronger gun trafficking laws.

You can support the efforts of Americans For Responsible Solutions here.

As an umbrella organization of 47 national organizers, the Coalition to Stop Gun Violence, is one of the most comprehensive non-profit gun control advocacy organizations out there with the inclusion of religious organizations, child welfare advocacy groups, public health professionals, and social justice groups. They seek to curb gun violence through research, strategic engagement, and policy reform that challenges existing gun laws. The coalition directly challenges elected officials who support the National Rifle Association.

You can help imagine a future free from gun violence with them here.

Another national non-profit group advocating for gun control reform through research and analysis of current policy and gun violence statistics is the Law Center to Prevent Gun Violence. The group works in collaboration with other advocacy groups, such as Americans for Responsible Solutions, providing legal expertise, research, and analysis to push for more effective legislation to be enacted.

You can donate to the Law Center's work pushing for smart gun laws here.