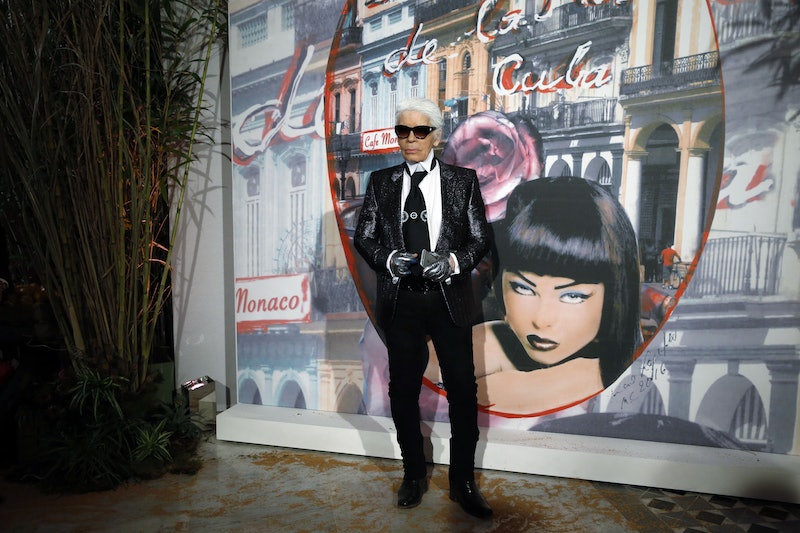 Fendi and Chanel designer Karl Lagerfeld has another collab on the horizon and this one has nothing to with his cat Choupette. Instead, Lagerfeld has teamed up Faber-Castell to create a range of pens. Yes, pens! According to Women's Wear Daily, Lagerfeld has been using the pen manufacturer's coloring pencils for most of his six-decade career. When you think about the partnership that way, it makes sense, since many of Lagerfeld's glorious designs begin as sketches, created with an F-C pen in his leather fingerless glove-covered hand! The collection, called "Karlbox," features tools and sketch supplies which you can store in a box that takes inspo from a Chinese wedding chest. Sound fancy and function. The set drops this September. How much is the Karlbox?

Well, fashion lovers, it's way, way out of your price range and mine. The Karlbox is approximately $2825. Unless you are an artist with a passion for pricy pens and the tools of the trade, you'd probably rather spend that kind of coin on one of his actual Fendi or Chanel designs, right? I know I would.

That said, here are other critical deets about Karlbox. It's limited edition. It will go on sale on September 1 at Faber-Castell stores and Lagerfeld boutiques. It will next be available at department and specialty stores on September 19.

So the pens land around the silver fox's birthday; he will celebrate his 83rd on September 10.

This isn't the first time the designer has teamed up with a writing utensil company. Fashionista reported that the designer teamed with French brand S.T. Dupont for a range of pens and highlighters that were fan-shaped so they wouldn't roll off whatever surface on which you placed them.

Judging from these pencil images posted on the official Faber-Castell Instagram, the craftsmanship is super obvious.

I also love the "old school" vibe of this collab. We live in a digital world, so we're constantly programming reminders in our phones. A handwritten list is more rare these days. A Karl Lagerfeld writing tool makes writing with instruments seem classic and classy.