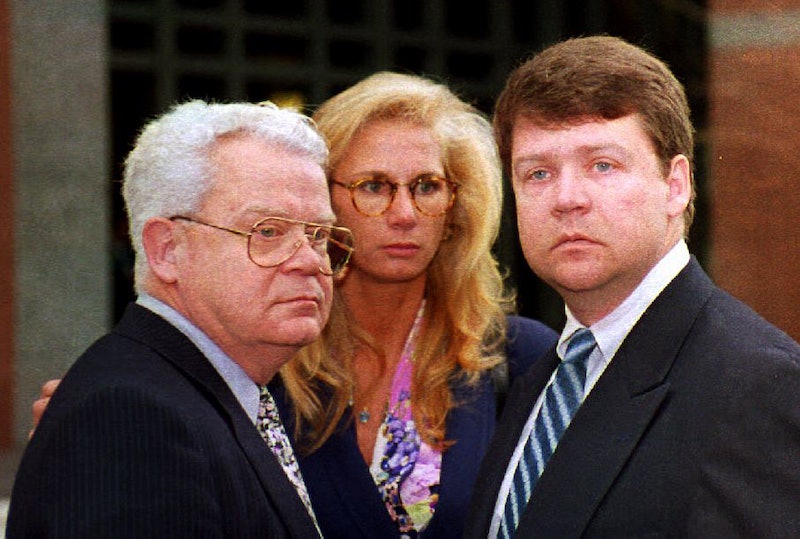 The "trial of the century" may have been the O.J. Simpson one, but just a few years before the athlete was acquitted of murder in 1994, the L.A. Riots echoed through the city in 1992. What happened at the Rodney King trial prompted the riots, and it should be explored in the upcoming portions of O.J.: Made in America. After the documentary took the time to establish Simpson's career as an athlete and pitchman, it's moving on to the circumstances in Los Angeles that led up to his trial — and that means examining the Rodney King trial.

According to ABC News, the whole thing started when King and a friend led a group of California Highway Patrol officers on a high-speed car chase. After King was arrested, four officers were filmed hitting King and kicking him repeatedly. ABC News reported that they were charged with "assault and the use of excessive force," but were later acquitted. Many were outraged that the police officers had gotten off, and people rioted in Los Angeles.

While it's not quite the same because Simpson is a civilian, his fame earned him privileges most defendants wouldn't have, including his "dream team" of famous lawyers. Think back to those news reports from 1994. O.J. Simpson was allowed to surrender himself to police, rather than being arrested, which allowed him the extra time to make his low-speed Bronco chase. And, while the murders took place in the primarily white west side of Los Angeles, Simpson's trial was moved to the Downtown L.A. courthouse, which drew a largely black jury pool, according to the L.A. Times.

Footage of the Rodney King incident was recorded by George Holliday, and the tape was broadcast on television and used as evidence in the trial. However, CNN reported that the grand jury elected not to indict any of the seventeen officers who allegedly watched the assault and did nothing. The next choice almost directly mirrors the Simpson trial. The New York Times reported that four officers were indicted and tried for their assault of Rodney King: Laurence M. Powell, Theodore J. Briseno, Timothy E. Wind, and Sgt. Stacey C. Koon. The judge decided to move their trial from the area of Ventura County, California, where the assault took place, to Simi Valley, a primarily white conservative town, according to The New York Times.

In their coverage of the trial, the Los Angeles Times reported that "one juror said that King, by being combative and ignoring the officers' orders, brought the beating upon himself." Another juror was quoted by the Times as saying, "These officers have been punished enough. Rodney King got out of jail, where he should be, and instead he's going to win a million dollars [in a civil lawsuit]." Almost exactly a year after the attack on King and after seven days of deliberation, the jury reached a verdict: not guilty. "All except Powell were acquitted of assault under the color of authority; the jury deadlocked 8 to 4 favoring acquittal on this count for Powell," the LA Times reported.

Powell and Koon later received guilty verdicts for violating King’s civil rights and were sentenced to two-and-a-half years in jail, according to the New York Times. The Times also reported that the judge delivered that sentence because "Mr. King had provoked their violence and the officers had already suffered from widespread vilification and from having to face repeated judicial proceedings."

The original not guilty decision was reached on Apr. 29, 1992, and the L.A. Riots began almost immediately after the decision, as Los Angeles' population, particularly its black population, strongly disagreed with the verdict. King would, as that juror predicted, go on to win a civil case, which awarded him $3.8 million, according to the New York Times. And those two officers were sentenced for violating King's civil rights. However, like the O.J. Simpson trial, it was the first criminal case that wound up sticking in the public's memory.