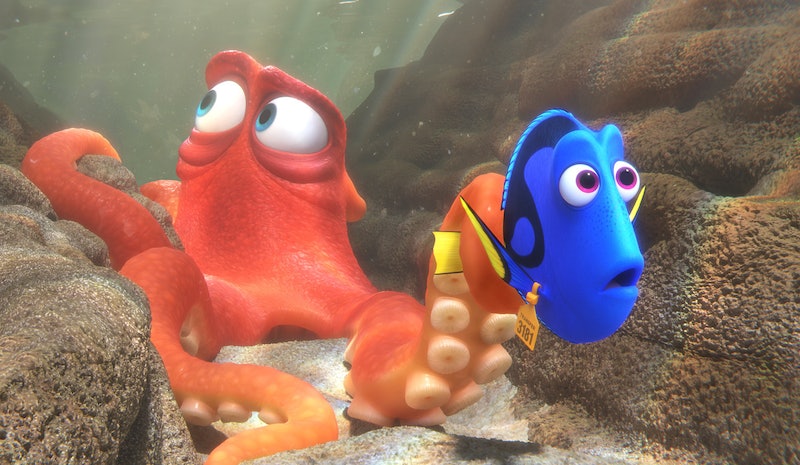 Disney Pixar always knows how to bring the feels, so it should be no surprise that Finding Dory may be sadder than fans were originally expecting. There have been new clips from Finding Dory released to the public, and one of the beginning moments of the film shows the second that Dory finally remembers her family. While that concept in and of itself is a seemingly happy one, the way that the news goes over with Marlin and Nemo shows that Dory going to find her family isn't exactly an easy conversation between the three of them. Basically, it looks like Marlin and Dory may not be leaving each other on the best note in the beginning of the film. I already need tissues.

The minute-long clip begins with Dory's excitement to go find her family. However, when she swims away and briefly loses Marlin and Nemo, Dory is already scared to be on her own. Her need to continue her journey is evident, and Marlin is adamant that they stay in the reef. The clip ends with their fight, but fans already know that Dory is going to make that trip anyway, but they may not have known before that these fish friends are leaving on pretty bad terms.

It appears that Marlin is going to have to struggle with the guilt of fighting with and not going with Dory throughout the rest of their search for her. And, if that's the case, that is one heavy topic of loss and regret that Disney is tackling in the movie. Watch the clip for yourself and form your own conclusions.

Crying yet? Seriously, how much turmoil is Marlin going to have to go through? He lost Nemo after a fight, and now it seems like the exact same thing might happen with Dory. But what makes it worse is that Marlin not only drove Dory away, but that he drove her away when he's not 100 percent sure that Dory could handle the great big ocean on her own. That makes the concept of wanting to take back all of the things you said just that much worse off.

However, another layer of sadness also gets added in when Dory's memory loss is taken into consideration. While Marlin may hold regret, Dory may not remember a thing. In fact, there's also the slight chance that she'll all together up and forget her friends. I want to doubt that, but there's really no telling what goes on in Dory's mind. This short term memory loss can have bigger consequences than we initially realized.

Meanwhile, I guess the heartbreak should be expected to some extent. For one, Finding Nemo was already a sad movie. Marlin losing his family, and then having his son taken from him was not at all a light topic. But anything that goes down between them these characters in the sequel is going to be so much harder to deal with emotionally now that we know them very well. Honestly, I don't think I can deal with the loss of friendships or characters when it comes to this colorful world in the ocean.

But, since Finding Dory is in fact still a kids movie, that factor will hopefully limit any truly heartbreaking moments from occurring. Hopefully. All I'm saying is... please let the friendly sharks and helpful fish continue in wake of any dark times. My heart just can't bear to undergo the pain.