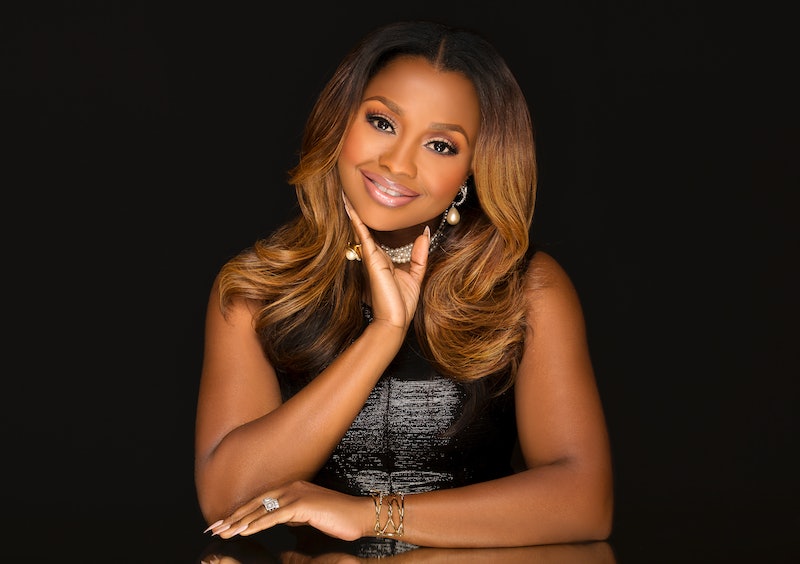 One aspect of the Real Housewives franchise that has always fascinated me is the authenticity of the women's relationships with each other. Not only do I wonder about whether the friendships are genuine within each show, but I also wonder how Real Housewives from different shows end up connecting. But after speaking with Real Housewives of Atlanta 's Phaedra Parks, I feel like the franchise as a whole could be described as Six Degrees of Phaedra. You might be a little surprised by that since Parks isn't someone who shows off every time she hangs out with someone, but the reality star is just more low-key with her friendships.

Anyone who watches Real Housewives of Atlanta knows that Parks has been through a lot in her life and she has not been at all shy to share everything with viewers. Parks explains, "The difference between a good reality show and a great reality show is people being very authentic, genuine, and most importantly, being transparent."

With that said, some of her greatest struggles have been very public, and there's no one who understands that like her fellow Real Housewives. Parks shares some insight about how the ladies connect to each other with a great analogy to describe the franchise: "Being on a reality show is almost like a sorority of sorts. Only another person in the sorority can truly understand the pledging process." That mentality explains why so many of these women across the different shows have formed such strong bonds.

For instance, I had no idea that the southern belle has some close connections to the Real Housewives of New York City ladies. Parks reveals,

"I know the Countess [Luann de Lesseps] and Sonja [Morgan]. We've had the opportunity to hang out. I just love Sonja's spirit. Sonja and I talked last week and I was encouraging her and she was encouraging me."

I'm sure that was much-needed considering Morgan's storyline on this season of RHONY . It has been very dramatic to say the least and Parks has been making sure to support her friends. Parks says, "They’re having a great season in New York, so you should definitely tune into that." Oh, I am, Phaedra.

Parks has also been in touch with Real Housewives of New Jersey's queen Teresa Giudice. Giudice's husband, Joe Giudice, and Parks' estranged husband, Apollo Nida, are currently serving sentences at the same prison. "Teresa and I obviously have some common things going on," Parks explains. "So we’ve talked about some the issues that I had and she asked me for some advice."

And Giudice isn't the only New Jersey lady who Parks knows. "I talk to Kathy Wakile. She and her husband are so sweet and their whole family has always supported us, as well," she says.

But when it comes to which show she would want to be on aside from her own, Parks answers "Beverly Hills" without hesitation. Aside from talking about how great the shopping and weather are in California, she reveals that she has connections to both Lisas:

"I’ve had the pleasure of working with Lisa Vanderpump. We’ve been on the Women’s Empowerment Tour together. She is so sweet. Lisa Rinna and I have a mutual friend. She is really great and has great children."

These existing bonds provide an authentic reason for Parks to be around just in case she ever wants to make a cameo appearance on RHOBH — which would be amazing.

Parks also mentions something that I have been fantasizing about for years: an all star edition of Real Housewives. She muses,

"Andy Cohen should have a Real Housewives all star team where we all stay together in a house. I think it would be very interesting to bring women from the various cities together since we are all so different. It would be quite entertaining."

This has to be the best idea ever. Hopefully, Cohen will listen up.

As fascinating as it is for me to hear about the Real Housewives from different cities interacting and forming relationships, I still want to know what's going on close to home, especially since it seems like the friendships in this franchise are constantly shifting. Parks immediately names Porsha Williams as her closest friend on RHOA. Everyone who is up-to-date on RHOA saw that answer coming, but it is still a pretty surprising development based on previous seasons. Parks admits this herself, saying, "We seem like unlikely buddies."

Nevertheless, they have forged a very genuine bond that had nothing to do with the show and everything to do with friendship. Parks explains how the two became so close after years of discord,

"She went through her divorce and we didn’t do it on camera because we weren’t doing it for that. I would call Porsha every day and try to inspire her and give her all the information and wisdom that I had related to the situation. And when I was going through my issues with my husband, she did the same. She always called to check on me and gave me words of encouragement."

Fans of Real Housewives have seen plenty of women link up and form alliances to make it through the season's fights. It seems obvious that some of these connections solely exist for the show. But that is just not how Parks operates. At all. She is all about uplifting and supporting the people around her. Parks explains,

"I’m happy for everybody, especially in reality TV, I am always encouraging women to do better and break a glass ceiling for each other. When NeNe [Leakes] does Broadway, that opens up the door for everyone else to do Broadway. When I land my political office, I hope that opens the door for another young woman to become a politician or run for office without a fear that it can’t work."

Yes, you read that right, the woman who already has a million jobs has aspirations to get into politics, which is actually one of the reasons she got into law in the first place. Don't worry, though, Parks isn't running just based on her fame. "I think before I do something on a huge scale that I would like to get my feet wet with local politics," she says. (Personally, I'm hoping that this is filmed for some episodes of RHOA.)

Parks really is unique when it comes to being a reality star. She is all about authenticity and is very honest when it comes to sharing her life and connecting to the viewers at home, her fellow Housewives, and everyone she meets. She believes that there is enough success for everyone and has made it clear that the key to maintaining friendships within the Real Housewives franchise is to sincerely support each other.