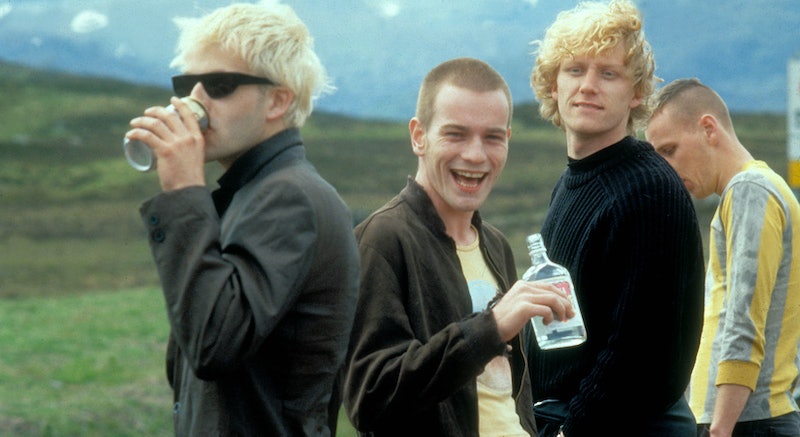 Raise your hand if you remember — no, long for — the carbonated glory that was Crystal Pepsi. Around for a brief, shining moment (1992-1993), the clear soda won such devotion that, this summer, PepsiCo announced it was hopping on the '90s nostalgia bandwagon and proving that some dreams really do come true. All of that's to say: wow, the '90s were a weird time, and books from the '90s were not excluded from the weirdness.

And though weirdness was the subject of bullying and ridicule and all kinds of totally annoying stuff in '90s middle schools, frankly all that yucky stuff paved the way for our tastes today. These days, we're happy to nerd out or geek out, to be totally unabashed fangirls (or fanboys), to indulge our inner weirdo. That Game of Thrones party you threw to such wide acclaim? You have, my friends, the '90s to thank for its success.

Now it's time to look back at the books we read — or were too young to read — and give them their due props. Seriously! These 7 titles will remind you that weird is always subjective — and never, ever, ever an insult.

"Choose life ... But why would I want to do a thing like that?” is the utterly 90s question at the heart of this pre-millennium classic.

2. Who Will Run The Frog Hospital ? by Lorrie Moore

There's something vaguely Now and Then about Lorrie Moore's tale of a friendship on the verge dissolution. Wistful, minimal, and pulsing with nostalgia, Who Will Run the Frog Hospital? is odd for the fact that it's lesser read Moore.

3. The Perks Of Being A Wallflower by Stephen Chebosky

MTV Books? Yes, such an imprint did exist — and it brought you this YA classic, which surely made a bunch of us want to try smoking, if only so we could have mouths that tasted like cigarettes (a detail Charlie, the novel's protagonist, so fondly recounts).

An academic satire that goes so far as to call the school at its center Moo University, Smiley's novel lampoons both university and agrarian life.

If you're a fan of The Hunger Games, you've probably heard about Battle Royale. Published in 1999, this dystopia gorefest is the story of a group of 42 Japanese junior high students who are left to fight to the death on a deserted island. Forget the love triangle in HG: you'll be feeling for all the characters in this page-turner.

Surely the weirdest title of the '90s. Pretty sure I ordered this through Scholastic book order.

7. An Anthropologist On Mars: Seven Paradoxical Tales by Oliver Sacks

Reading Sacks, one is reminded again and again of how ahead of his time he was. I mean, c'mon:

“This sense of the brain’s remarkable plasticity, its capacity for the most striking adaptations, not least in the special (and often desperate) circumstances of neural or sensory mishap, has come to dominate my own perception of my patients and their lives. So much so, indeed, that I am sometimes moved to wonder whether it may not be necessary to redefine the very concepts of “health” and “disease,” to see these in terms of the ability of the organism to create a new organization and order, one that fits its special, altered disposition and needs, rather than in the terms of a rigidly defined “norm.”

More like this
Jessica Simpson On The Time She Was Pursued By A Backstreet Boy & An *NSYNC Member
By The Editors
We’ve Entered The Hot Boy Reader Era
By Samantha Leach
The Banned 'Friends' Ad Shows Monica As You’ve Never Seen Her Before
By Sam Ramsden
Twitter Is Having A Field Day Over Mr Blobby’s Costume Selling For £62k
By Catharina Cheung
Get Even More From Bustle — Sign Up For The Newsletter
From hair trends to relationship advice, our daily newsletter has everything you need to sound like a person who’s on TikTok, even if you aren’t.