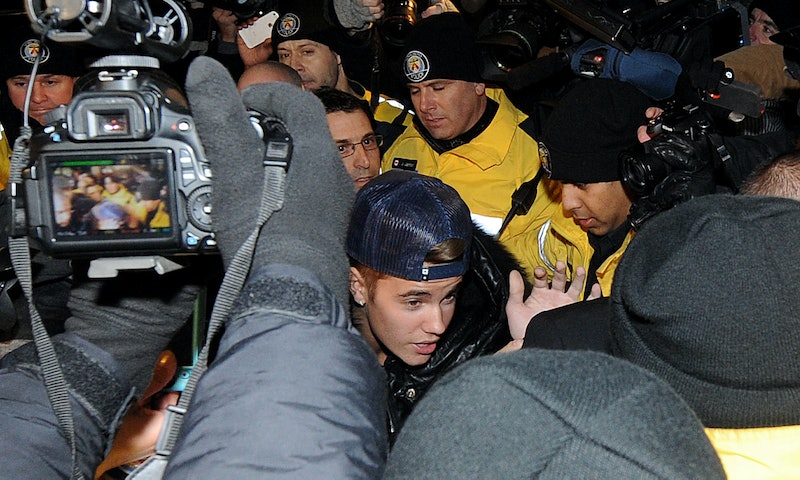 After Justin Bieber's January arrest for a DUI and other charges, the troubled pop star was taken to the Miami-Dade County Jail and was required to perform a sobriety test. A new police video of Justin Bieber stumbling in jail while trying to walk a straight line was just released, and it just doesn't bode well for him and his situation.

Even though there's reportedly 10 hours of video footage of Bieber in jail, Miami-Dade County prosecutors released just a few minutes of footage to the press — but it's enough to know that Bieber was under the influence of something.

Bieber had previously admitted to being under the influence of marijuana and Xanax at the time of his arrest, but in the video, he stumbles around the one-minute mark. Wearing a hoodie with the hood completely over his head, baggy shorts, and bright red shoes, he tries to walk heel-to-toe carefully. However, Bieber has his arms out to balance himself, and even reaches out to a wall after he stumbles. At one point, Bieber is seen speaking with a supervising police offer, and they both point fingers at each other.

Another video was also released of Bieber doing push-ups in his jail cell. Now that's the Bieber we know. No gym? No trainer? No problem.

You can watch Bieber's push-up video below:

You can watch Bieber's jail video below:

More like this
Hailey Bieber Went Pantsless In A Hoodie By Justin's Brand Drew House
By Dominique Norman
Austin Butler Recalls Lisa Marie Presley Showing Him Elvis’ Bedroom
By Jake Viswanath
Linda Ronstadt’s “Long Long Time” Plays A Pivotal Role In The Last Of Us
By Brad Witter
The Jonas Brothers' New Album Has A Very Meta Name
By Alyssa Lapid
Get Even More From Bustle — Sign Up For The Newsletter
From hair trends to relationship advice, our daily newsletter has everything you need to sound like a person who’s on TikTok, even if you aren’t.