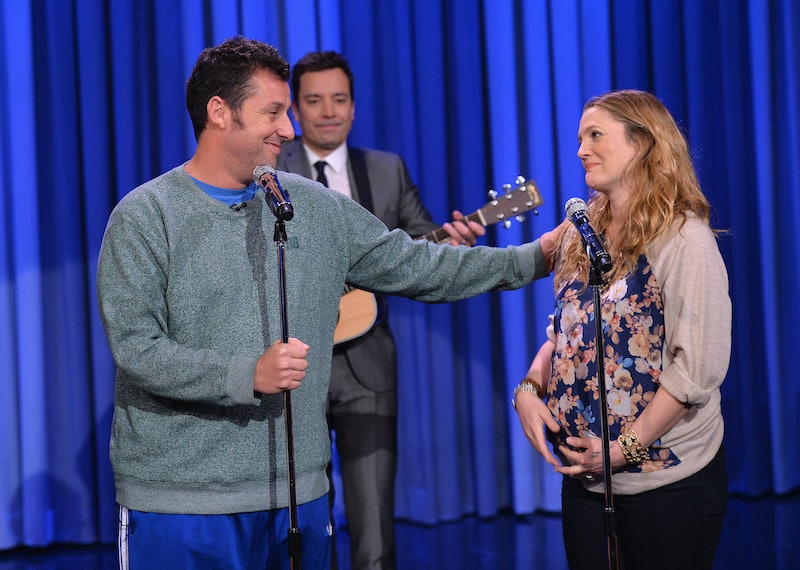 What do you get when you combine Adam Sandler joking, Drew Barrymore giggling, and Jimmy Fallon playing the guitar? Basically, something that's just as cute and sweet as a picture of really adorable puppies. Sandler and (a very pregnant) Barrymore appeared on The Tonight Show on Wednesday to promote their upcoming film, Blended. Fallon noted that Sandler and Barrymore were a great romantic onscreen couple, having appeared in The Wedding Singer and 50 First Dates together. Hey, they're no Katharine Hepburn and Spencer Tracy, but I love them anyway. Barrymore jokes, "Every 10 years, we get to fall in love again." Which prompted Fallon to pull a guitar out and suggest that Adam Sandler and Drew Barrymore sing a song about loving each other.

In the song, aptly titled "Every 10 Years," Barrymore sings, "You are the Fred to my Ginger Rogers." "You're the Rob Ford to my crack cocaine," sings Sandler. "Am I your best movie husband? Better than Hugh Grant? Ben Stiller? Jimmy Fallon?"

Ahh... who could forget the greatness that was Barrymore and Sandler in Fever Pitch?

"I will still love you when your boobs touch the floor," sings Sandler. "So right now?" Barrymore answers.

You can watch (swoon over) the adorable video below: