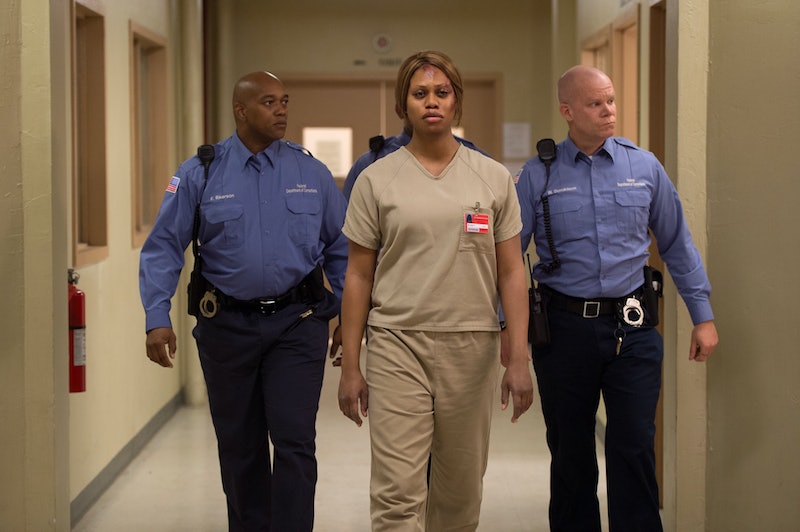 Many Orange Is the New Black characters have dealt with their fair share of suffering throughout the course of the series. However, I doubt you'll find anyone who's been treated more poorly than Sophia Burset, played by Laverne Cox, especially throughout the last year. For those of you who are having a hard time remember what happened to Sophia in Orange Is the New Black Season 3, let me help to jog your memory. Basically, it all started when Sophia's wife, Crystal, started letting Gloria's son, Benny, get a ride with Michael to school. At first, everything was going fine. Sophia and Gloria were even bonding over how hard it is to be away from their sons. But, then Sophia noticed a bad change in Michael's behavior and immediately accused Benny of being a bad influence.

Obviously, this didn't go over well with Gloria, especially after it turned out to be the other way around. Benny wasn't the bad influence at all. Michael was. Things grew pretty tense between the two inmates from then on and fully escalated when Sophia momentarily lost her temper and shoved Gloria into the bathroom wall. Soon afterward, transphobic rumors began circulating about Sophia and even resulted in her getting attacked by a group of inmates in her salon. But, when she went to complain to upper management about the lack of security at Litchfield, she ended up getting sent to the SHU "for her own protection" and has pretty much remained there ever since.

Right now it's unclear how Sophia's situation will improve (or worsen) now that the prison has become a "for-profit" establishment. Will she be in even more danger with some of the newbies? Will she ever be let out of the SHU? At this point, it's hard to say, but this show has done a great job so far of highlighting the injustices transgender inmates can face, which is an extremely important and highly unexplored topic, so I'm hopeful her character will be getting a decent amount of screen time in order to further share Sophia's story.

It should be said that Gloria did feel extremely bad about what happened to Sophia in the end and never intended for it to go that far. But, now that a new regime is coming in (along with some new and incredibly mean looking guards), I'm not sure if anyone has the power to help Sophia out of her current situation. Let's just hope she's able to find a way out of this prison within a prison and get the justice she so deserves.