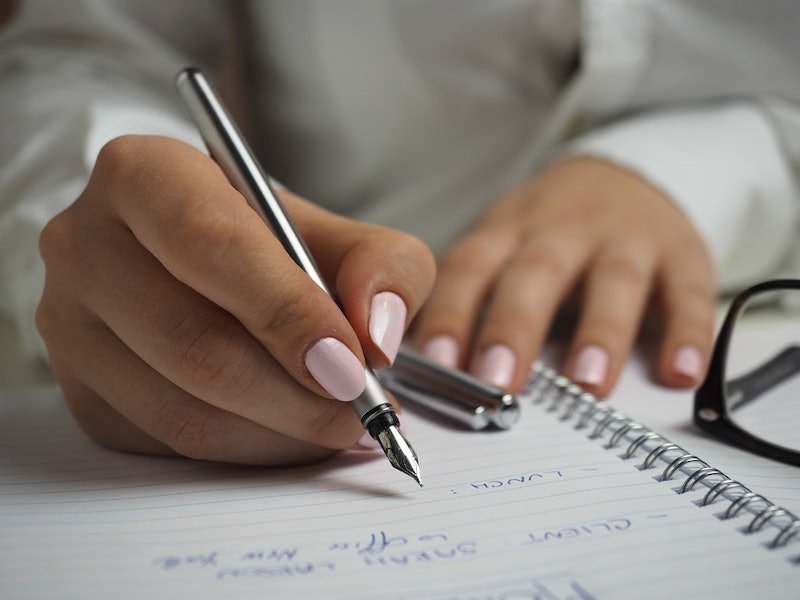 When you think of the word "responsible," you may feel like it's an adult trait better left for more adult-y people. Waking up early, getting to work on time every day, remembering to exercise or grocery shop — these are habits of responsible people, and ones that you are far from nailing down.

And I totally get that feeling. It's difficult to be a fully responsible grownup on a 24/7 basis — especially outside of work. But that doesn't mean it's impossible, or something you shouldn't work towards. As psychologist Nicole Martinez, Psy.D., LCPC, says in an email to Bustle, "Responsibility should not only be thought of something you are at work ... It should be quality that you have developed over time that makes things run in a more efficient and organized manner, and enables you to be the best version of yourself you can be."

I probably don't have to say it, but when you aren't responsible, it can start negatively affecting your life. "Individuals who are not responsible struggle at work, have a hard time making goals and deadlines, and lose jobs often," Martinez says. "They are not present, or are forgetful in their relationships, which can end up costing them the relationship, or losing the respect and trust of those they care about."

All of that drama is best to be avoided. So in order to start heading in a more mature, grownup direction, here are some traits of responsible people. Feel free to emulate them, until the habits stick.

Responsible people seem to have a magic ability to stick to their plans, much to the annoyance of the rest of us. If they want to get up earlier, they do. If they plan to save money, it actually happens. But even more impressively, they have the ability to say no to something they can't commit to — and that's just about as responsible as it gets. Going forth, think clearly about what you can and cannot do, in order to avoid having to make an excuse, according to Djordje Todorovic on Lifehack.org. It's better to be honest than to make an excuse and back out.

2. They Organize Their Lives

The responsible people of the world are all about planners and agenda books, calendar apps, and Post-It notes galore. They are hyper organized to an amazing degree, all in the name of keeping themselves on track. You may marvel at it, but it's actually quite easy to do this yourself. As Martinez suggests, "Develop an organizational system to make sure that you are one top of your schedule, your goals, and your tasks that are due. Make sure that you are also tracking personal plans and obligations in the same manner, so that you never miss anything, and so you follow through on your word and promises." Done and done.

If you want to be perceived as a responsible human being, then undying punctuality is going to be your new goal. Because nothing is more impressive, responsible, or adult than showing up on time. According to Kevin Daum on Inc., dependability, and proving that you don't want to waste other people's time, also makes you appear trustworthy. It's a trait that will pair nicely with your newfound responsibility.

4. They Cancel Plans Ahead Of Time

I'm sure you've witnessed some of your less responsible friends wait until the last moment to bail on plans. And I'm sure it's because they don't want to hurt your feelings, or they are trying to decide what to do. But the best, and most responsible, way to handle such a situation is to simply be honest. If you're in such a situation, and can't (or don't want) to meet up with friends, tell them well ahead of time so they aren't left waiting. They'll appreciate the heads up.

5. They Control Their Emotions

Responsible people keep their cool, and don't let their anger or jealousy get out of hand. According to Daum, it's because they know that negative emotions can quickly derail a situation (think work meeting, get together, etc.) in a way that isn't productive, or fun.

In the same vein as above, responsible people know that complaining doesn't really get them anywhere. In fact, it's kind of pointless. "Complainers are usually the people who talk too much and do nothing," said Todorovic. It's much better to ditch the whiney habit, and start taking your life into your own hands. If you don't like something, take steps to change it.

7. They Know Trust Needs To Be Earned

Think back to when you were a kid. Your parents didn't just leave you home alone on a whim. They waited until you were ready to look after yourself for a few minutes. If it went well, they'd leave you for longer periods of time, etc. etc. The same thing goes for adulthood. Responsible types earn that respect through proving themselves, and they are always willings to work for it.

You expect to earn people's trust if you show up late to work, turn in projects past the deadline, cancel your plans last minute, or forget to attend meetings. That's obviously the opposite of consistency, which is another thing you need to be perceived as responsible. So get yourself a routine, and stick to it. As Todorovic said, "Having a routine is good. Routine means order, and this means that you are on the right track."

9. They Admit Their Mistakes

There's something very brave about coolly admitting your mistakes. And that's just what responsible people do. The moment they realize something went wrong, or they screwed up, they own up to it. If you do the same, people (bosses, friends, etc.) are much less likely to get mad, and more likely to work with you to fix the issue.

I'm sure you can see that a huge theme here is will power. As I said above, if a responsible person wants to make a change, they do it. And they're able to do it because of self-discipline. It's definitely a learned trait, and one that takes some work, but it is possible to have a bit more control over yourself. The first step often lies in dealing with a little bit of discomfort. As Amy Morin said on Forbes, "It’s normal to want to avoid pain and discomfort, but trying to eliminate all discomfort will only reinforce to yourself that you can’t handle distress." You can handle difficult things (like getting up earlier) if you put your mind to it.

Here we go again with the magic abilities. Or at least it seems that way to me, and all my other fellow procrastinators. But sure enough, responsible people hardly ever put things off. They know that waiting until the last moment to write a paper, or finish a project, isn't going to result in their best work. So they just don't.

If you want a quick tip on how to adopt this for yourself, think about doing the worst thing on your to-do list first, according to Amy Spencer on Real Simple. It will make the rest of your list seem like no big deal, and it'll make emulating this amazing trait just that much easier.

Because responsibility actually isn't magic, or something you're innately born with. It's something that's earned, and worked hard for. So that means you can snag some of these tips, and work on upping your responsibility game, too.

More like this
These Are The Fastest Electric Kettles You Can Buy
By Margeaux Baulch Klein
5 Signs You Have A Toxic Relationship With Yourself
By Lexi Inks
These 3 Signs Are The Master Chefs Of The Zodiac
By Kristine Fellizar
These 4 Zodiac Signs Make The Best Bridesmaids
By Nina Kahn
Get Even More From Bustle — Sign Up For The Newsletter
From hair trends to relationship advice, our daily newsletter has everything you need to sound like a person who’s on TikTok, even if you aren’t.