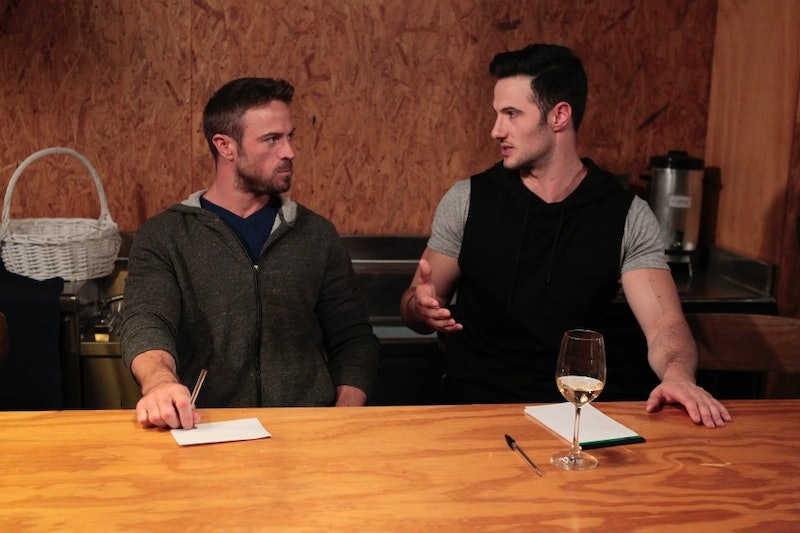 Unbelievably, we're only four episodes into Season 12 of The Bachelorette and yet it's clearly the shadiest season yet. With a set of contestants who seem so preoccupied with the dynamics of masculine competitiveness that they've almost forgotten what they're actually there for (romance, or something? Deli meat platters, maybe?), there's been shade thrown left, right and centre and more than enough ill advised sentiments and moves made on poor Bachelorette JoJo Fletcher. There's been so many shady moments from Season 12 of The Bachelorette so far than I'm almost worried. Not for the sanity of the contestants, but whether the show can maintain the same levels of jaw dropping lunacy and drama for the rest of the season. Because let's be honest, the best moments of Season 12 of The Bachelorette so far have proved this season to be a contender as one of the best in the shows history.

At this point it also feels a little too difficult to pinpoint exactly who the villain is right now. Though the overly-aggressive Chad Johnson is the obvious choice you also have the incredibly annoying passive aggression of Evan and the self-serving heroics of Alex. Suffice to say, with characters like those in the Bachelorette mansion, it's no surprise that we've seen all these shady moments so far:

1. All The Dudes Got Mega Drunk On Their First Night

Is there anything more alluring than a pack of drunken men who are hammering cocktails whilst trying to outperform each other in the macho stakes? Thankfully, yes.

2. Will Uses An Origami, Fortune Telling Game To Trick JoJo Into Kissing Him

Those origami fortune telling games were the perfect way to predict whether you were going to marry Leonardo DiCaprio when you were in junior high, but using them as a ploy to kiss a woman when you're a grown-ass man? Good lord, no.

I'm with James S. on this one: the belly button is a sacred space and should never, ever be prodded unprompted by someone you don't really know too well. Okay, guys? Good.

4. Jon Introduces Himself With Horrendous Joke About The Size Of His Manhood

With an opening line which provided little surprise as to why he was eliminated so quickly, Jon decided to introduce himself by making reference to his ample manhood whilst also perpetuating a horrifying racial stereotype in the process. Not cool, Jon.

5. Daniel Decides It’s Time To Strip Off And Show Off

When you're desperately competing for attention, nothing screams desperation like stripping off to your skimpies and parading yourself about the place. It was a totally unwarranted, distracting and shady af tactic, too.

A close family friend of JoJo's, Pavelka caused all kinds of panic when he turned up looking as though he was there to sweep our Bachelorette lovely off her feet. But, all he was actually there to do was tell her how much he wanted her to "find love", which is kind of like having your big brother gatecrashing all of your dates just to pass on his "blessing".

7. Chad Accuses JoJo Of Being “A Little Naggy”

If there was any indication that Chad was about to become a massive problem, then this was it. Shadier still was the fact that the rest of the contestants seemed more appalled by Chad's statement than JoJo was.

8. Chad Devours Every Meat Platter In The House

Firstly, those are for sharing. Secondly, he was totally aware of how absoluetly irritating it is to have someone chewing on slabs of deli meat right beside you and played up to that fact.

Chad was unstable, annoying and unnecessarily aggressive, but comparing him to Hitler? Daniel needs to gain some perspective, immediately.

10. When Evan Accused Chad Of Steroid Use

You'd of thought that erectile dysfunction specialist Evan would have thrived in the opportunity to be vocal, honest and funny during the sex talk task, but instead he used it to throw shade at Chad, basically implying that he was suffering from the ugly physical and mental side effects of steroid use.

11. Chad Rips Evans Shirt, Both Spend Days Arguing About It

When Evan tried to return to his seat, Chad was obviously about to explode with rage. The result? Ripping Evan's shirt. Shady move, by far, but Evan would not stop bringing up how his nemesis "owes" him another shirt and Chad wouldn't stop implying that his flop-haired opponent "pushed" him first. Oy, with the drama already.

12. Chad Tries To Get JoJo To Kiss Him On Stage In Front Of Everyone

A desperate attempt to re-assert his position as alpha male saw Chad getting thankfully rebuffed by JoJo who didn't seem too keen on indulging in some unprovoked PDA with him. Awkward.

There is something irrevocably terrifying about the way in which Chad kept loitering in the periphery of every contestants one-on-one time with JoJo. Even more uncomfortable was when he decided to jump in, cut their time short and grab some extra time with her, whether she wanted it or not.

14. The Housemates All Gang Up Against Chad

Listen, Chad is a buffoon of the highest order, but his behaviour wasn't helped by a room full of men who decided to passive-aggressively deal with his intimidation by mostly complaining about it behind his back and forming an I Hate Chad clique, made up of everyone in the mansion.

15. Chad Calls The Rest Of The Contestants A “Parade Of Losers”

And basically, continues to call them out for being overly-sensitive, yoga loving and — God forbid, friendly men. Apparently these are not traits that women enjoy. Chad is an expert and women will like what he tells them to like.

Poor Wells. After almost collapsing during the firefighter challenge, the less than macho radio presenter received no sympathy from his fellow contestants, with war vet Luke deriding his failure by saying, "This guy is not cut out for chopping wood". Luckily, JoJo felt differently and even awarded him a rose for his efforts.

17. Chad Has A Meltdown And Punches A Door (And Then Threatens Evan)

This man should never be left in an enclosed space without a plate of deli meats and a workout bench nearby.

On what planet did Evan think this was going to work? Furthermore, Chad didn't get eliminated and Evan still remained in the house. Yeah, that totally worked for you, man.

19. Evan Translates A Simple Peck On The Lips As Him Having “Made Out” With JoJo

Even worse, he calls himself “daddy” whilst describing the pity party that JoJo offered him with her lips. Shudder.

20. Evan Tries To Tattle On Chad To Bachelorette Host, Chris

What is it with this season and contestants relying on junior high tactics in order to try and further their position in the show?

As well as delivering Liam Neeson levels of physical threats to Jordan Rogers (implying that he'll "find" him when the show ends), the deli meat loving aggressor also, bizarrely, threatened to dismember everyone's "legs off and arms off". Seriously? Too far.

Shadier than a cave at nighttime, my friends. So may the drama, cringing and awkwardness continue for the rest of the season, and maybe JoJo can even enjoy some genuine romance along the way, eh? So long as the guys figure out a way to be civil to each other first, that is.