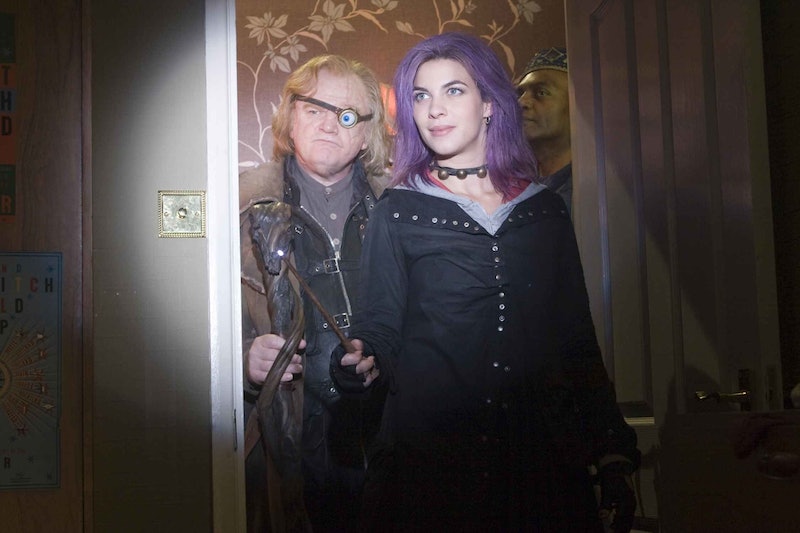 The Harry Potter book series is so massive there was no possible way for every detail to make it into the big screen adaptations, but I will never stop wishing the Harry Potter movies had made more time for Tonks. The wonderfully weird Nymphadora Tonks is Harry Potter 's most underrated character. In a world full of magical people and adorable house elves like Dobby, Tonks managed to stand out in every scene she was in and not just because of her hair.

Tonks is a special character, one whose motivations are never fully explored in the movie universe. She is fierce, quick-tempered, and loves a good joke. Her style is that of someone who does not care about blending in, and I am sure that is because Tonks so fully embraces her metamorphmagus abilities. She was born with the ability to become almost anything, and her transformative nature only adds to her cool factor. Tonks is easily one of the best characters in the movies, and her lack of time on screen is a terrible reason not to shower her with love.

Natalia Tena imbued every Tonks scene with the personality and flair the character deserved. She even allowed sharp-eyed viewers to watch Tonks grow from a playful young adult into a mature soldier. By the time the movies ended, Tonks was every inch the fighter, and while she lost her life in the Battle of Hogwarts, her legend lives on.

As one of the rare Hufflepuffs in either the movies or the books to get any screentime, Tonks is proof positive House Hufflepuff is way cooler than everyone thinks. The first time Tonks ever shows up onscreen she is being completely put off by how clean the Dursleys' house is and sassing off to Mad-Eye Moody. Not many people would dare challenge Mad-Eye, but Tonks does it without even thinking. She has a temper to match her vibrant hair, and she can turn it off and on seemingly at will.

Tonks was introduced in Harry Potter and the Order of the Phoenix, a movie with Sirius Black, Dumbledore's Army, and one of the most epic battles in the entire film series, and yet she still made a lasting impression. In fact, Tonks is so instantly memorable and enchanting she almost causes Harry to fly his broom into a boat during their flight to 12 Grimmauld Place. In just a handful of scenes, Tonks is established as a woman who loves to have fun, but who is also not to be taken lightly when it comes time for a battle.

The Harry Potter universe has no shortage of amazing female characters, but precious few of them are adults. There is the beloved Professor McGonagall and everyone's favorite mother, Molly Weasley, but Tonks stands out for being an adult woman who is neither evil (like Umbridge and Bellatrix) nor full of sage advice. She is wading into the fight against Voldemort because she believes in making the world a safer place. More than that, she is an auror, one of the most powerful and dangerous jobs a witch or wizard can possess, and she trained under Mad-Eye himself. With credentials like those, how can you not adore Tonks?

Tonks is brave and headstrong when it comes to going after the things she wants out of life. When she falls in love with Remus, she doesn't let his own self doubt stop them from having a beautiful, albeit short-lived marriage. In the world of Harry Potter, Tonks is the rare young adult woman who is both fully self-possessed, a force to be reckoned with during a time of war, and allowed to be as funny as she is fearless. As a character, she is not quite a contemporary to Ginny, Hermione, and Luna, but just outside of their age range, giving her the opportunity to show them just how amazing their post-Hogwarts lives can be.

What Tonks lacks in actual scenes she more than makes up for with her inherent awesomeness. An auror, a Hufflepuff, and a woman who will happily turn her mouth into a duck's bill to get a laugh out of her comrades in dark times, Tonks is an inspiration. It is time for Tonks to get all of the love she deserves. She didn't have the biggest role in the Harry Potter movies, but thanks to her joke cracking, butt kicking, and eternal optimism, Tonks is still one of the best characters the franchise offered up.

More like this
Rupert Grint Just Shared A *Major* Update About Ron Weasley’s Future
By El Hunt
Your Guide To Watching 'Everything Everywhere All At Once' In The UK
By El Hunt and Sophie McEvoy
Twitter Is Overjoyed By Angela Bassett’s Record-Making Oscar Nomination
By Maxine Harrison
Anne Hathaway Shared A "Thrilling" 'Princess Diaries 3' Update
By Darshita Goyal
Get Even More From Bustle — Sign Up For The Newsletter
From hair trends to relationship advice, our daily newsletter has everything you need to sound like a person who’s on TikTok, even if you aren’t.