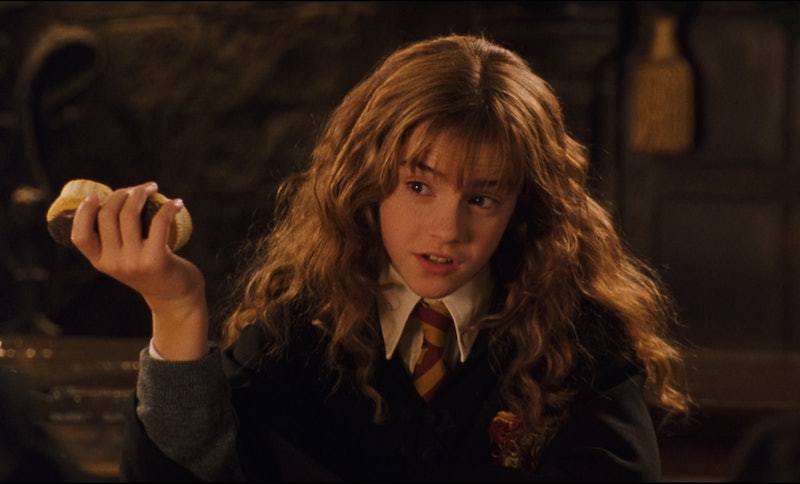 These witches aren't just your stereotypical strong female characters, either. They're each different, with their own strengths and flaws — Luna is a bit out-to-lunch, but still kind and courageous. Ginny can get hotheaded, but she makes up for it with loyalty and nerve. And Hermione is the smartest witch of her year and as brave as any Gryffindor, but she can also be ruthless and intensely stubborn. They're all every bit the equal of their wizard classmates, and they're all well-rounded characters to boot. J.K. Rowling's girls all feel real, or as real as you can get at a school for witchcraft and wizardry.

Even the boys can be refreshingly feminist, when they're not desperately trying to get a date to the Yule Ball. Harry and Ron are meat-headed teenagers sometimes, but they also seem perfectly happy to admit that Hermione's the most talented when it comes to magic (which may just be a ploy to get her to help with their homework, but we'll give them the benefit of the doubt).

The women of Harry Potter were always there to remind us that girls can cast Bat-Bogey Hexes just as well (if not better) than boys can. So here are some choice quotes for when you're fed up with the non-magical patriarchy:

1. "Just because you've got the emotional range of a teaspoon doesn't mean we all have."

— Hermione Granger, Harry Potter and the Order of the Phoenix

2. "We're all human, aren't we? Every human life is worth the same, and worth saving."

3. "Oh I see, so basically, you’re going to take the best-looking girl who’ll have you, even if she’s completely horrible?"

4. "What do I care how he looks? I am good-looking enough for both of us, I theenk! All these scars show is zat my husband is brave!"

5. "Some wizards just like to boast that theirs are bigger and better than other people’s."

6. "I do not generally permit people to talk when I am talking."

— Professor McGonagall, Harry Potter and the Order of the Phoenix

7. "Just because it’s taken you three years to notice, Ron, doesn't mean no one else has spotted I'm a girl!"

9. "Quidditch! Is that all boys care about? Cormac hasn’t asked me one single question about myself, no, I’ve just been treated to ‘A Hundred Great Saves Made by Cormac McLaggen’ nonstop!"

10. "Harry and Ron both made furious moves toward Malfoy, but Hermione got there first — SMACK! She had slapped Malfoy across the face with all the strength she could muster. Malfoy staggered. Harry, Ron, Crabbe, and Goyle stood flabbergasted as Hermione raised her hand again."

11. "Let’s get this straight once and for all. It’s none of your business who I go out with or what I do with them."

12. "You’ve got the right to wages and holidays and proper clothes, you don’t have to do everything you’re told."

13. "The truth is that you don’t think a girl would have been clever enough!"

15. "I notice I’m always the one who ends up sorting out the food, because I’m a girl, I suppose!"

16. "It matters not what someone is born, but what they grow to be."

— Ginny Weasley, Harry Potter and the Order of the Phoenix

More like this
The 20 Best Audiobooks To Fall Asleep To
By Aoife Hanna and K.W. Colyard
'Bridgerton' Star Nicola Coughlan Confirms Season 3 Will Focus On Colin & Penelope
By Grace Wehniainen and Alyssa Lapid
Candice Carty-Williams’ 'People Person' Tackles Daddy Issues With Warmth
By Sam Rogers
The Trailer For The 'Game Of Thrones' Prequel 'House Of The Dragon' Is Dark AF
By Grace Wehniainen
Get Even More From Bustle — Sign Up For The Newsletter