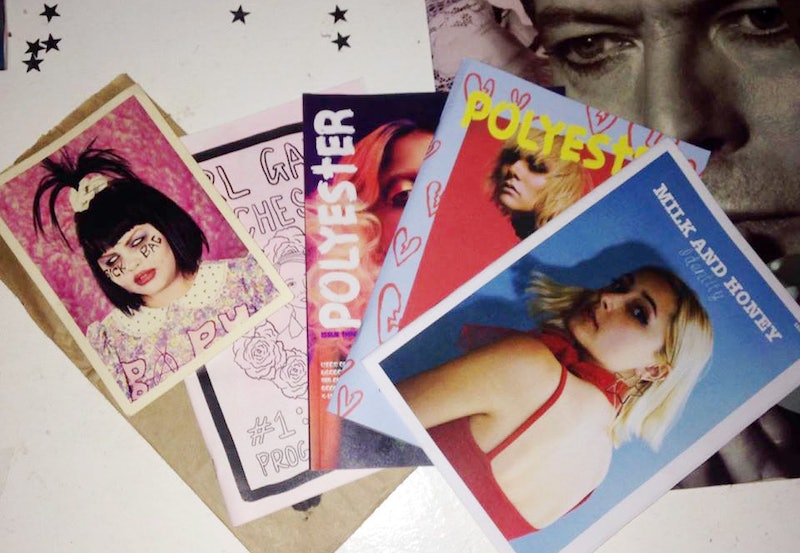 For those who aren't already in the small press circuit, fanzines — often known simply as zines — are self-published magazines that often focus on the intersection of politics, pop culture, and personal style. Female fronted fashion and beauty zines in particular seem to be on the rise, as the young and politically-aware feminists of today try to claim back a little bit of power from the mainstream.

Back in the day, zines most often took the form of photocopied print-outs displaying original collages, illustrations, and text. But nowadays, they can be shared predominantly online. According to the British Library, zines have historically been linked to the style and politics of subcultures, with the first punk fanzine Sniffin Glue being created way back in 1976 by Mark Perry.

Punk was all about rebelling against established systems, including the worlds of media and print. Creating your own outlet by your own rules meant that you were completely in control of the messages being put out there. Fast-forward to the early '90s, and we experienced the peak age of Riot Grrrl, which saw feminists applying similar ideologies and aesthetics to the 40,000 zines circulating around North America at the time, as reported by Flavorwire.

In 2016, zines are still around and as relevant as ever. While occasionally getting picked up by the mainstream media, they still mostly circulate under the radar. Lucky for anyone who wouldn't even know where to begin on their exploration of lady-run zines, I've rounded up my current favorite female-fronted publications that any politically-minded fashionista should enjoy.

Polyester is a kitschy London-based zine founded and run by the multi-talented Ione Gamble. According to the publication's "About" page, realizing the monotony and minimalism in modern fashion prompted Gamble to compete through her own gorgeously trashy world inspired by online subculture trends.

Content includes a wide array of stunning fashion imagery, interviews with some fabulous creatives including Rookie’s Tavi Gevinson, and a column by Everyday Feminism blogger and Tumblr icon Celia Edell. Polyester also has some fabulously original online content that you should check out right now.

If you’re into visual arts (fashion included) and literature, then Coalition, curated by the ever-amazing Fabiola Ching, is a definite must-have. The publication only accepts and shares content that focuses on the triumphs, traumas, and narratives of artists of color, and the representation it provides is beyond brilliant. A photo series by Teta Alim in which she explores her girlhood and cultural identity is a notable favorite in issue six, which is also available to read online. Not only does the zine have a strong visual identity, but the stories told are unforgettable.

Perhaps I like this one so much because it satisfies my nosy nature, but Hullu is a zine that documents young creatives in their usual artistic environments. The zine’s creator, Jessica Gwyneth, is herself a fantastic photographer and has recently taken some shots of Moldy Peaches’ band member Adam Green wearing his own designer hats and featuring some sneaky backstage photos at various menswear shows during London Fashion Week.

Four times a year since 2011, a black and white-printed zine filled with glorious work from assorted worldwide female collaborators has been passionately put together by zinester Cherry Styles. The content is sourced through an open submission policy, meaning that absolutely anyone who isn’t a dude can be part of The Chapess. You can currently pre-order an anthology style mash-up of all the best bits as well as some bonus new material submitted for prior issues.

Milk & Honey is a quarterly feminist zine and online platform that showcases the writing, illustrations, photography, and musings of young women, including those from trans or LGBTQ+ creators. Curator Celia Wickham’s own personal work explores themes around identity, sexuality, and mental illness.

Although being a primarily internet-based artist, Molly Soda is no stranger to zine-making. Her latest printed creation, Like Like, contains 20 pages of unfinished thoughts on love that were too long to tweet. Pre-order yourself a copy over on Big Cartel, and perhaps take a quick glance at her other works including I Don't Want You To Miss Me and Ur So Emo About Boys while you’re there.

Editor-In-Chief Beccy Hill created the wonderful Sister zine in her third year of university as a reaction to what she perceived to be the shallow and soulless nature of mainstream teen magazines, according to her interview with Dazed. Each publication's theme seemingly begins with the letter "S," with previous issues surrounding sex, street, and swag. As well as being available to buy online, you can also find yourself a copy at Urban Outfitters or in the Tate Modern gift shop.

Sofia Niazi, Rose Nordin, and Heiba Lamara combine their creative talents to bring us this highly visual published masterpiece. OOMK (One Of My Kind) zine surrounds itself around contributions from those of diverse and ethnic backgrounds to explore themes such as faith, activism, identity, and style. The latest issue includes works based on spam emails, puns about veils, and some outstanding imagery of sartorial textiles embroidered with Lisa Simpson surrounded by decorative plants.

One for all you particularly leisurely ladies, edition two of Ladies Of Leisure (affectionately shortened to LOL) is a print-exclusive zine of 68 pages brimming with original work by amazingly skilled female artists based in Melbourne, Australia. The team is made up of passionate women who not only showcase their art, but give us some insight on the creation and process behind it. Each copy is sent with a risograph-print poster as well as a sticker.

Artist Angel Rose told Residence Gallery that she brainstormed her latest zine, Sick Bag, after considering the double meaning of the word “sick.” While the term can be used to describe something cool, it can also have an opposing effect when used to explain something repulsive. Instead of being printed in a usual booklet format, her work takes the form of punk-inspired, distressed postcard portraits in an actual paper bag. Be careful that none of your houseguests are feeling particularly queasy, or the images inside may get ruined.

Although these female-run publications will undoubtedly add some artsy fun to your coffee table and make you appear immediately interesting to any living room invaders, it's important to note that they also prove that substance doesn't have to lack style.