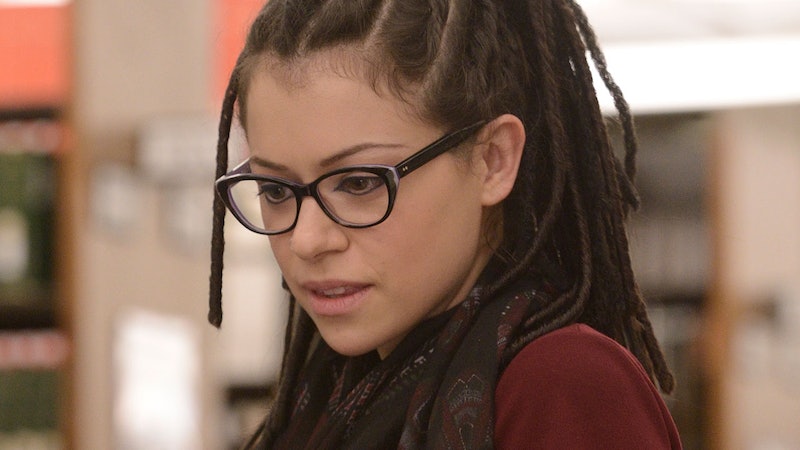 Cosima Niehaus is one of a few (no family, too), but she's far from your run-of-the-mill clone. Do they make such a thing? Anywho, the geeky American scientist — one of Tatiana Maslany's several faces — of Orphan Black left the end of Season 1 in a particularly tricky pickle, involving not only her health but her relationship with her monitor. And after seeing yesterday and today's Instagram teasers for the series, we can't help but wonder: will season two be all about Cosima?

For those that need a bit of a refresher: last season, Cosima was left in a particularly rock-and-hard-place situation. She's sick and seemingly not getting better anytime soon (as evidenced by all that blood she's coughing up: eugh). Dr. Leekie's girlfriend, Delphine — Cosima's monitor — has turned, it seems, to the pro-free-clones side and helped figure out that the women are patented property of the DYAD Institute. And while pro-clone Rachel Dawkins has already attempted to acquiesce the girls with contracts, Cosima's discovery proves that it's all just a smokeshow. With Cosima's health failing and the DYAD Institute hoarding all the data on the girls, it seems likely that she'll be on the hunt for answers to cure herself. Which brings us to yesterday's teaser.

"But yesterday's teaser featured Sarah and Rachel, not Cosima!" Only, not so fast. Take a closer look at that Sarah: sure, the clothes undoubtedly read "Sarah," but listen to the accent and take a look at the eye make-up and you'll notice something. Like that seriously Cosima eyeliner. And is that...a nose ring? DING DING DING! Looks like Cosima gets in on the clone-playing-clone game (Helena, Sarah, and Alison all did last season). But why the heck would she do that? Those questions are answered by today's teaser.

That is, 100%, Cosima. And a syringe with a bunch of stuff in it. Maybe Cosima was going undercover to pilfer a cure! Or at least some sort of remedy. Which would make sense considering her life is on the line with her illness. And, naturally, there's a chance that illness could affect the other girls as well. (We know the German, Katja, also had something that made her cough blood.)

Which also brings us to, surprisingly, Kira. Kira, Sarah's biological daughter — and the only clone able to have kids (we think it's because her twin, Helena, was the original and Sarah wasn't supposed to happen so something else is going on there, but we should stress that's just a theory) — survived a should've-been-fatal car accident last season, with something going on inside of her that amazed the other doctors when they saw it. No internal damage. Which is really impressive. With Kira gone now, there's obviously a hunt to find her for Sarah's sake, but: what if Kira is also the key to Cosima's health? If Kira has some sort of genetic ability to heal herself, there's a chance that her biological information can be synthesized or turned into some sort of anecdote for Cosima's illness — whether she was born with it or given it by the evil creepy scientists involved.

"This is my biology, it's my decision," Cosima states in the teaser, juxtaposed to shots of the syringe needle and intimate poses between Delphine and our favorite dreadhead. Logically, there's going to be a push-pull for autonomy the whole season: and what better way to show that playing out than Cosima taking control of her body and her biology — and therefore her life? Whatever ends up being the central focus of season two is likely to be heady stuff, explored in a myriad way with all the women. Really we're just rooting like hell for Cosima to get better because we can't help but love the goofy, geeky, pot-smoking weirdo clone. April 19th hurry the fuck up!

More like this
'This Is Us' Included A Heartbreaking Easter Egg About Jack's Death
By Grace Wehniainen
'Heartstopper's Kit Connor Revealed His Hopes For Season 2
By Nola Ojomu and Sam Ramsden
'Gentleman Jack’s Cast & Crew Are Keen On Season 3, Too
By Frances Stewart
'Ghost In The Shell: SAC_2045' Was Only Supposed To Last Two Seasons
By Kadin Burnett
Get Even More From Bustle — Sign Up For The Newsletter