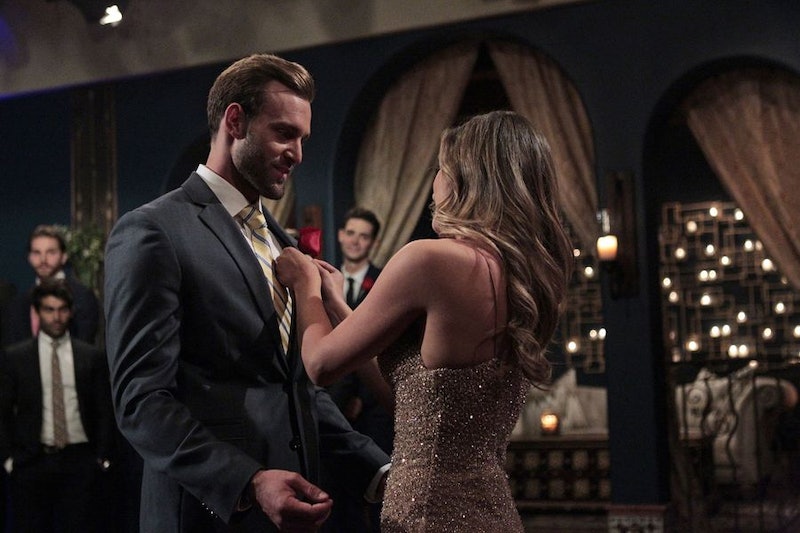 This cast of The Bachelorette has to be among the craziest ever. Actually, I think it is the weirdest, most toxic, dysfunctional people that The Bachelorette has ever gathered in one room and made to fight over the same woman. Chad has anger problems and eats sweet potatoes like apples. Jordan says he’s on the show for love but really I just think he wants to be famous. And Robby, oh Robby. Previews for the rest of JoJo’s season show that there are rumors that Robby has a girlfriend at home or recently broke up with someone to go on the show. He claims in the previews that is not the case, so why did Robby and his ex-girlfriend break up?

Well, first things first — Robby’s ex-girlfriend’s name is Hope Higginbotham, and Reality Steve claimed that she and Robby were together for four years before he dumped her in January of 2016, right before filming. Robby denied this on the show, and Hope has not yet answered Bustle's request for comment. According to Reality Steve, the final casting weekend for The Bachelorette is end of January/beginning of February. According to this Instagram picture, Hope and Robby were together as recently as November of 2015. There's no knowing when or why this couple did split, but their breakup doesn't mean that's the last time Bachelorette fans will hear from Hope.

Reality Steve (that guy, I swear) reported that Bachelorette villain Chad, who is set to be on Bachelor In Paradise starting August 2, was seen on Snapchat hanging out with Hope. I mean, huh?

Why are these two hanging out? The villain and the ex-girlfriend? I have a few ideas. (Chad and Hope have not yet answered Bustle's request for comment.)

They Are Just Trolling Us

That's what Reality Steve thinks, and that's what I think, too. Hope and Chad are trying to cause a stir. Chad is very self-aware and very smart with his marketing (his Twitter is a goldmine), so maybe they're both trying to extend their 15 minutes of fame. I mean, LOOK at Chad's Instagram. There's no way this isn't fake. This is the most plausible explanation.

This, to me, is the least plausible, but stranger things have definitely happened, especially on The Bachelor and The Bachelorette. Their whole community is so incestuous, and plenty of the guys and gals stay friends after the show that I bet it's fairly easy to meet the friends, family, and even exes of fellow cast members. Maybe Chad and Hope are a match made in heaven? Everyone deserves someone to grow old and eat sweet potatoes with, you know?

This Is A Producer Red Herring

Judging from the previews for the season, the biggest storylines are Chad being Chad and Robby having a girlfriend. This "relationship" could be just a ploy from producers to boost ratings.

While we don't know why Robby and Hope broke up, the timing will be called into question on the show. There's also something really fishy about this Chad and Hope thing. We'll see what JoJo thinks — after all, she's the one that has to live with it.