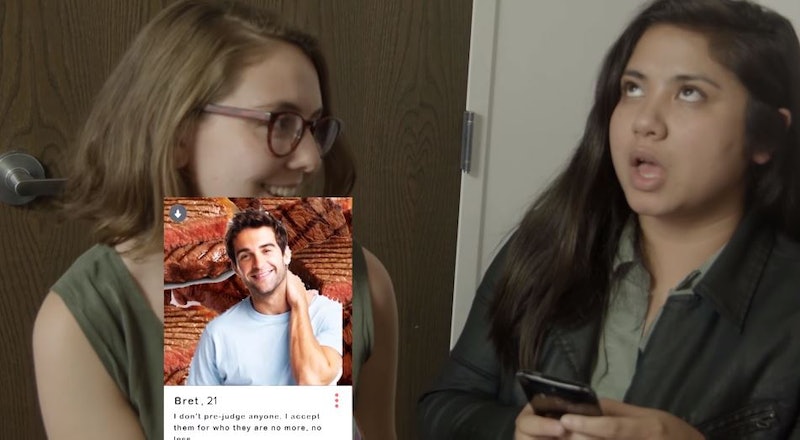 The recent Brock Turner case and other cases like it have revealed how little punishment people — especially privileged, white, educated men — get for committing sexual assault or rape. Sadly, in a patriarchal society, these crimes are not always viewed as the major issues they are. THINX's new "Second Chance Dating" video points out this problem in a hilarious and blistering fashion by advertising a fake app that lets users date convicted rapists. Yes, the premise is absurd — but it's also way, way too real.

The fake app in question is called Second Chance — "Because we weren't there for the first, so who are we to judge?" the narrator says. With the swipe-left-or-right format that has become de rigueur in online dating, users can choose white men from prestigious universities who have recently been off the market due to a rape sentence, but are "too charming to face the consequences" and are now looking for their "second chance." The women in the video act impressed as they flip through photos of preppy university guys with bios like, "Always been a person that people like to be around whether they are male or female."

That phrase, of course, is a direct reference to a letter by Brock Turner's father asking the judge to give his son probation instead of jail time: Wrote Dan Turner, "Brock has an easygoing personality that endears him to almost everyone he meets. He has always been a person that people like to be around whether they are male or female." The letter details Brock Turner's athletic and academic accomplishments as if they preclude the possibility that he could sexually assault someone. (News flash: They don't.) On June 2, Turner was sentenced to six months of county jail time and probation for three felony charges of sexual assault — a sentence which many view as absurdly light. And yet, as Jezebel pointed out in the days following the sentencing, Turner will spend more time in jail than 97 percent of sexual predators.

The video also tackles a common defense rape culture frequently grants to people who have assaulted or allegedly assaulted other people: That they're just good old boys whose partying got out of control. (Indeed, Brock Turner's own letter to the judge holds alcohol and party culture — rather than himself — accountable for his actions again and again.) "Just because they're victims of binge drinking and the sexual promiscuity that comes with it doesn't mean it should follow them their whole lives," one of the women in the video says. This points out the absurdity of both reducing as horrific a crime as rape to excessive partying and ignoring the way that rape follows the victims for their whole lives. That's the point that the statement from Brock Turner's victim makes: A longer sentence would have "severe impact" on Brock Turner? Well, then let's talk about the "severe impact" Brock Turner's actions will have on the woman he assaulted.

THINX's video closes out with some pointed commentary on the victim-blaming directed toward rape and assault victims, telling users not to meet their rapists at the campus pool, campus drinking fountain, "or anywhere" — because the truth is that no location is exempt from rape — and to wear running shoes, because that is the logical conclusion of telling women to dress to avoid rape. It ends with the warning: "Personal bio may reflect an inability or refusal to take personal responsibility."

"Second Chance Dating" is funny, sure. But it's also important, because it's full of points we keep having to make again and again and again. And we'll continue to make them until they're finally heard.