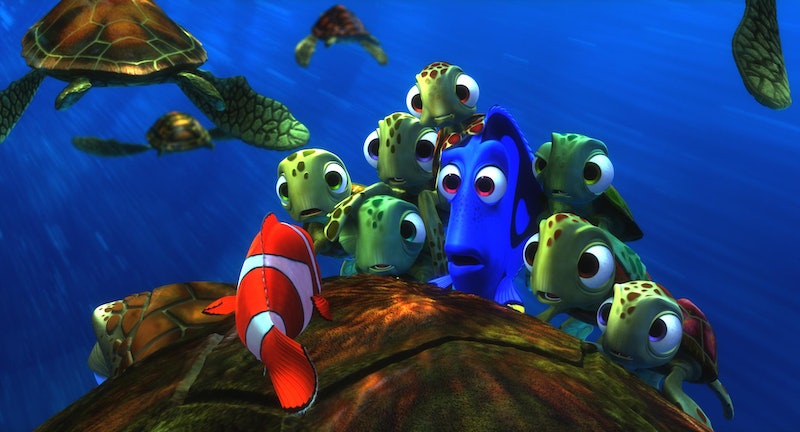 Finding Dory is kind of a big deal. The latest animated feature from Pixar absolutely destroyed the box office record for the largest ever opening for an animated film, hauling in a ridiculous $135 million in North America over its first weekend. That's $45 million more than Inside Out last summer, $60 million more than Zootopia earlier this year, and $65 million more than the film's predecessor, Finding Nemo, back in 2003. So odds are you're going to see the movie if you haven't already, but since it's a sequel, do you need to watch Finding Nemo before Finding Dory ?

The short answer is yes, you probably do. Finding Dory may be released a full 13 years after the original film, but it actually takes place only one year after that movie. In the beginning of the film, Dory is living with Marlin and Nemo when she begins to have dreams about memories of her life from a time before she had met them. She is then inspired to go on a journey to find her long lost parents, and that journey makes up the bulk of the film. But to really understand the importance of any of this, you need to know the characters. You have to understand Dory's short-term memory loss, and you also should know the parallels to Marlin and Dory's quest to find Nemo in the first movie. There are also other fun characters, like Crush, who return from the first film, so it definitely helps if you already know who they are.

However... having said that, Finding Dory is not just a sequel to Finding Nemo . The film could also be classified as a spinoff, since it doesn't focus on the main characters of the first film (Marlin and Nemo) and instead shifts the story to Dory, who played second fiddle to Marlin in Finding Nemo. Dory is separated from Marlin and Nemo early on in the film and meets a whole new cast of characters in a whole new setting (the Marine Life Institute), and to understand and enjoy any of this, you wouldn't really have to have seen Finding Nemo.

Obviously, the ideal situation is that you watch Finding Nemo first so you know the characters going in and are able to catch the fun callbacks and cameos from the first movie that show up in the new one. But if you were to watch Finding Dory without ever having seen Finding Nemo, odds are that you would still enjoy it. It might take you a moment to figure out the characters' traits — Dory's short-term memory loss being the most important detail to know — but once you did, you would easily be able to understand the movie.

So whether you watch Finding Nemo first or not, you'll find that Finding Dory is a great film that is totally capable of standing on its own two legs, err, fins.