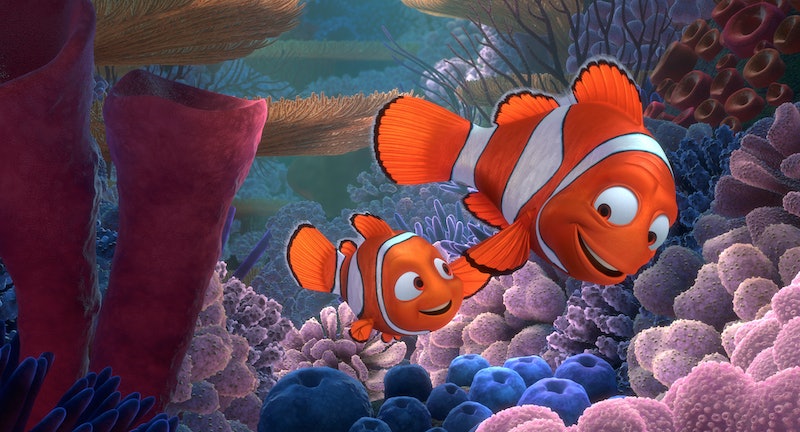 One of the most successful animated films of all-time, Finding Nemo, is finally getting a sequel this month in the form of Finding Dory. The new movie is arriving a full 13 years after the original, but the bulk of the cast of characters are returning. Dory is back, obviously, and so are Marlin, Crush, Squirt, and others. But what about the first film's titular star? Is Nemo in Finding Dory ?

While some fans seem to be under the impression that Nemo only appears in the new film via recycled footage from the first movie, that's not the case. The adorable little clownfish is back for another go round in Finding Dory. Really though, fans shouldn't be too surprised. Nemo is mentioned in the film's official synopsis: "With help from Nemo and Marlin, Dory the forgetful fish embarks on a quest to reunite with her mother and father." And he also showed up in the film's first teaser trailer, which was decidedly not old footage and featured Nemo's worry after Dory has night terrors and sleep swims, which causes her to regain a piece of her memory and begin her quest to locate her long lost family.

However, if something about Nemo seems a little off to you, you're not imagining things. Unlike Dory, Marlin, and the other returning characters, Nemo is not voiced by the same actor in Finding Dory as he was in Finding Nemo. The first movie starred actor Alexander Gould in the role, who was nine years old at the time. But Gould is now 22, and since Finding Dory takes place only six months after Finding Nemo, a new child actor was enlisted to fill the role since Gould no longer sounds like a little kid. Enter Hayden Rolence, who was nine years old himself when he nabbed the part of Nemo. And just in case there are any Alexander Gould purists out there, fear not. Pixar has not forgotten about the actor, as he does make a voice cameo in Finding Dory.

So don't worry, Nemo absolutely has a part to play in Finding Dory. He might sound a teensy bit different thanks to the new voice actor, but he should still be the cute and troublesome little fella you know and love.