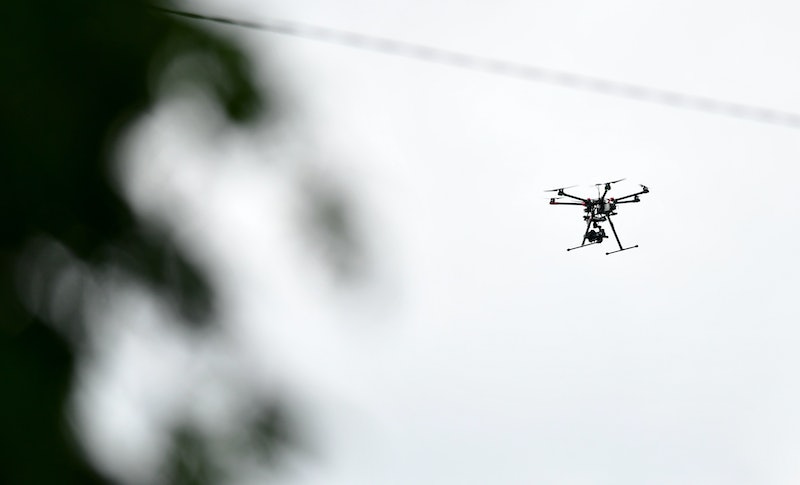 As the commercial drone has made its way to global markets, its uses have gone beyond just flying for fun, or for film and photography purposes. In some countries, drones have been used for what some might call a "subversive" purpose. Specifically, pro-choice groups have used them to deliver abortion medication to women in countries with restrictive abortion laws. Since they have been used in an international context, could drones also deliver abortions to U.S. residents seeking such aid?

Last summer, Women on Web, formerly known as Women on Waves, used drones to deliver abortion pills to women in Poland, where abortion is banned except in cases of fetal abnormality, if a patient's life is at risk, or in cases of rape or incest. The group also recently collaborated with other pro-choice groups in Northern Ireland to deliver the pill to women who are unable to travel outside the region to seek the procedure. Ireland allows women to seek an abortion only in cases where the patient's life is in danger.

With abortion restrictions expanding in the U.S. — especially in rural states like Utah and Indiana, which have seen some nightmarish anti-abortion bills just this past year — drones could transcend the reproductive healthcare boundaries that American women face, just as they have in European countries.

Unfortunately, the same services would not necessarily be provided by Women on Web. U.S. federal law mandates that abortions are legal, due to the landmark 1973 case Roe v. Wade. However, individual states can limit abortion based on specific medical regulations. For instance, Utah passed an abortion law in March which would require doctors to administer anesthesia to individuals seeking a surgical abortion from 20 weeks' gestation onward. The requirement increases the risk of complications during the procedure, which is so short that general anesthesia is often unnecessary. Insidious laws of this nature present hurdles for women in the U.S. who hope to access reproductive healthcare, and their right to terminate a pregnancy.

Many rural states enforce mandatory consent laws, waiting periods, and counseling for women seeking abortions, which force them to seek the procedure in another state. For instance, Indiana requires written consent from a parent for minors to receive an abortion, as well as a mandatory waiting period. South Dakota law also enforces counseling and a mandatory 72-hour waiting period, and 98 percent of counties across the state did not have an accessible abortion clinic in 2011. The state also prohibits remote abortions, meaning anyone seeking a medication abortion can not proceed with the service from their own home, posing another issue for those who would feel more comfortable proceeding with an at-home abortion.

This creates emotional, economic, and geographic hurdles for individuals. Eighty-nine percent of counties across the country did not have an abortion clinic in 2011, forcing women to travel to access the procedure. In fact, a third of women living in the U.S. have to travel over 25 miles to receive an abortion, and 57 percent of women between the ages of 15 and 44 live in a state that is "hostile or extremely hostile to abortion rights."

Using drones to offer abortion pills to women in rural U.S. states could present a small aid to the problem of access. However, the aircraft also has its own set of Federal Aviation Administration (FAA) guidelines and restrictions. On Tuesday, the FAA announced its rules for commercial drones, which includes most users having to operate their aircraft only during the daytime, and for operators to receive a certification of use that must be renewed every two years. Commercial drone operators must also pass a background check administered by the Transportation Security Administration every two years.

Commercial drone operators with a device that weighs more than .55 lbs must also register their drone with the FAA's Federal Drone Registration, and failure to do so can result in sanctions, which include civil penalties of $27,500 and criminal penalties which include $250,000 or three years in prison. But it's hard to say whether drones delivering abortion pills across the U.S. would even be possible.

Abortion drones in the U.S. could help women in rural states to at least access the medical procedure without having to undergo a waiting period or mandatory consent and counseling laws. But offering this kind of delivery on such a large scale would be extremely challenging.