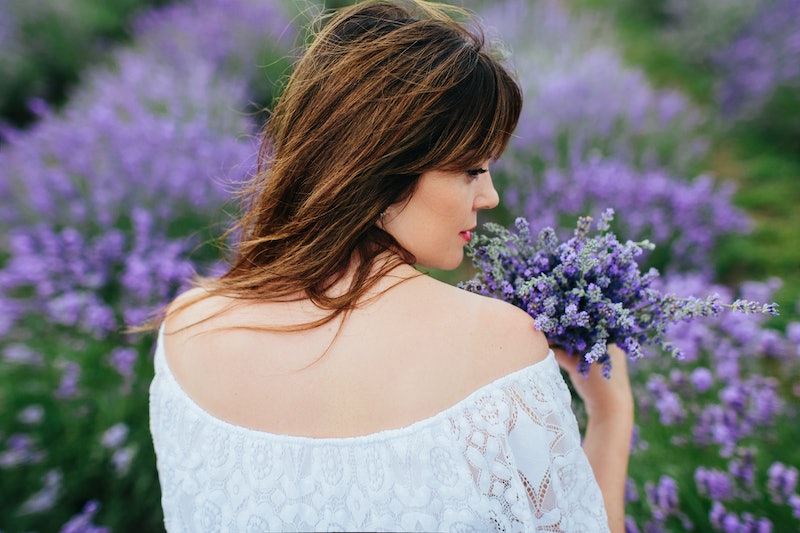 Whether we're single or we have an SO (or we're somewhere in between), prying family members will inevitably ask us when we're going to get married. What these people in your life may not know, though, is that millennials are more disenchanted with the idea of marriage than any generation before them. In other words, it might be time to cool it with the future wedding inquiries.

In 2014, a survey by the Pew Research Center showed that 61 percent of people over the age of 65 said marriage should be a top priority for bettering our society. Only 29 percent of Gen Y said the same, though. The age we're getting married is certainly getting older on average as well, proving that even if we fancy the idea of marriage, we're in no rush to walk down the aisle. The median age for men to get married for the first time is 27.1, and for women it's 25.3. These are the highest median ages the U.S. has ever seen.

Millennials aren't the only ones with cold feet, though. The U.S. Census reported that the number of couples over the age of 50 who lived together without getting hitched rose from 1.2 million in 2000 to 2.8 million in 2010. For them, marriage could result in loss of Social Security or pension, so they choose to stick with just love instead, and no paperwork. It seems like all sorts of people are in agreement — maybe marriage isn't the best idea after all.

Here are eight totally valid reasons to never get married.

1. Marriage Is Going Out Of Style

The Pew Research Center reported in 2010 that only half of Americans are married. In 1960, 72 percent of adults over the age of 18 were married, but today only 51 percent are. Two years after that, it was discovered that the number of never-been-married individuals in the U.S. was at an all-time high. One in every five adults over the age of 25 had never tied the knot, compared to one in 10 in 1960.

Besides, the very nature of long-term relationships has changed over the last few decades. We're much more likely to move in together when things get serious, and generally, both people in the relationship are working professionals who have their own goals and ambitions. The so-called financial security that was once a sparkling pro of donning a white dress doesn't exist in the same way anymore.

2. You Can Opt For A Domestic Partnership Instead

One of the benefits of getting married is that you're legally recognized as a couple. Well, you don't need to go to the chapel in order for that to be the case. In 11 different states, you have the option of signing up for a domestic partnership, which is a legal and formal recognition of your relationship, just like marriage. The benefits of this union differ in each state, and sometimes in each city or municipality. Do some research to find out what's offered in your hometown.

Keep in mind, however, that your domestic partnership won't be honored in some other states and countries, so factor that in if you and your partner have plans to move around but you want to maintain benefits.

3. So Many Marriages End In Divorce Anyway

Admittedly, divorce rates have actually been in decline over the last two decades. In 2011, there were 3.6 divorces per thousand people, while in 1990 there were 4.7 per thousand people. People who married in the 2000s are actually seeing a very low divorce rate, particularly if they're college graduates, out of which only 11 percent were divorced before their seventh wedding anniversary.

Even so, the divorce rate is still pretty high — around 30 percent of couples who got married in the 1990s were divorced before they hit their 15th anniversary. Sure, that number is lower than what it was 30 years ago, but it's still significant enough to make us narrow our eyes in skepticism. Plus, the fear of divorce simply looms over our heads because, frankly, we're still surrounded by it. We've seen parents, friends, and celebrities split up — or, as Gwyneth Paltrow and Chris Martin call it, "consciously uncouple."

Regardless of the statistics, we can't shake what it feels like to witness so many seemingly happy couples split, and we don't want to put ourselves through the legal and financial strains it would take to end a marriage. Finally, let's not forget: only 29 percent of people who are divorced say they would marry again in the future. Ouch.

4. You Don't Need To Be Married To Fulfill A Lifelong Commitment

Most of us grew up thinking that marriage was the ultimate commitment. That's how it's portrayed in movies, books, and TV shows. The proposal is when the birds sing and the string instruments play an ethereal melody that signifies eternity. Well, Hollywood doesn't always get it right (um, #OscarsSoWhite). If you're in a relationship and the two of you know you want to be together for the rest of your life, why do you need a binding legal document to make that a reality? If you think about it, the institution of marriage historically had nothing to do with love and affection anyway, which brings us to the following...

Back in the day, love and affection were things nobody gave a rat's ass about when it came to marriage. The whole idea of joining two people together for life was centered more on trading women for goods or property as if we were nothing more than material things. Under English law in the 19th century and earlier, women's legal identity dissolved into nothing once they married a man. Technically, a married woman existed under the "protection and influence of her husband, her baron, or lord" until the Married Women's Property Act of 1882, which allowed women to own and property for the first time.

In the U.S., married women weren't allowed to sign contracts, write a will, or own property — and were only allowed to do certain things with their husband's permission. Surprisingly, it was Mississippi that passed a law in 1839, the first of many groundbreaking state laws, allowing women to legally own and control property. It was a game changer in the way married women existed in the world.

Even outside the legal scope, just thinking about the longstanding traditions of marriage make it clear that women have been considered property for a long time. The fact that the father "gives away" his daughter at the wedding came from the fact that, historically, she was being exchanged for a hefty dowry. It's understandable if you just don't want any part of it.

6. You Don't Have To Be Married To Have Children

A Pew survey in 2010 showed that four out of ever 10 millennials actually viewed marriage as obsolete, particularly when it comes to having a family. We know we can still be the legal parents of our kids without having to walk down the aisle.

Forty percent of children were born to single mothers in 2011. One year later, one half of all births to women under the age of 30 happened out of wedlock. Although not all of these cases were planned, it does show that the previous idea of a nuclear family isn't as crucial as it once was. Ultimately, educated women today don't see marriage as the main event that kicks off your adult life. They're able to accomplish a whole lot without tying the knot — including and especially having children.

7. You Might Feel More Independent If You're Not Married

According to the 2010 Pew survey, 24 percent of single people believe that marriage will prevent them from accomplishing certain career goals. The vast majority of these same individuals flat-out believe that married folks aren't as financially secure and generally happy as they are. Furthermore, it's said that once you're married, you tend to lose close friendships with some people in your life.

Although these notions aren't necessarily proven to be true, you can see how the boundaries of marriage may hinder you from living out your life freely, exactly the way you want. It's not that getting married automatically makes you a boring failure with zero friends. It's just that living outside the bounds of marriage may give you more freedom to go about your work, handle your finances, and live out your social life.

8. Not Getting Married Is Not Synonymous With Being Alone

Many of us understand that rejecting marriage doesn't mean you'll die alone, without anyone around to keep you company at night, save for a cat. Nor does it mean that you're going to miss out on a commitment with someone you love. You can still date, you can still be in a long-term relationship, or you can enjoy the throne of singledom for the rest of your days — whatever floats your boat. Thankfully, in the context of larger society, we've (at least slightly) moved away from the idea that an unmarried woman is a lonely loser. Might as well ride that wave and keep proving to the world that saying no to a proposal is just as cool as, if not cooler than, throwing an engagement party.