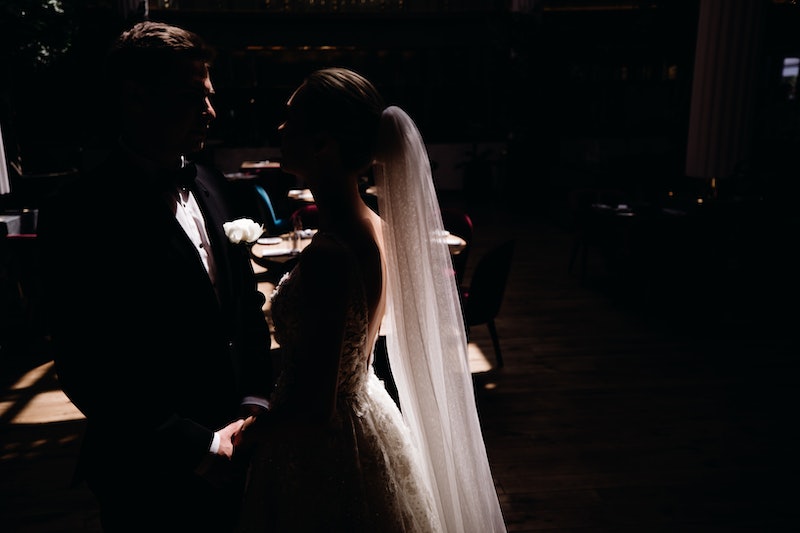 Rape culture is a ubiquitous part of our society, from the language we use to the way we expect people to dress. So it shouldn't come as a surprise that a number of marriage traditions enforce rape culture. Marriage, after all, is a patriarchal institution originally created for political purposes, including the transferal of ownership of a woman from her father to her husband. Only in the '70s could a married woman even get a credit card in her own name, and it was also not widely acceptable until recently for women to retain their own names after marriage. Over time, marriage has become more of a symbolic act to express commitment and less of a way for a woman to become her husband's property, but vestiges of misogyny still remain within the institution.

At the same time, I'm not condemning people who choose to practice marriage traditions. The problem is not with the traditions themselves, but with the reasons behind them, and an individual's reasons may be different from the reasons the practices exist in the first place. If you are aware of the problematic sources of certain traditions but still want to practice them because they fit your needs, you shouldn't be judged for it — especially if it's your wedding. You should be able to do whatever you want on your wedding day.

That said, here are some traditions whose underlying ideologies can perpetuate rape culture.

1. Men Asking Women To Marry Them

It has long been expected that men propose to women, and not the other way around — with the exception of today, actually, because "leap day" is the one day a year when women are "allowed" to propose to men. This expectation is just one of the many expectations around men making the first move when it comes to sex and romance. The stereotype that men must get women to date them or marry them or sleep with them and that it's up to women to respond can be problematic — not just because it discourages women from going after what they want, but also because it encourages men to pursue what they want at a woman's expense.

Men often feel as if it is their job to make the first move, even if they're not sure if a woman wants it — and that if she says "no," she's just saying it because it's unladylike to pursue someone. Putting what men pursue over what women want perpetuates rape culture.

A white dress is supposed to symbolize "purity" — aka virginity. A woman who has not had sex is deemed "purer" than one who has, and therefore more valuable or desirable. This association between a woman's character and her sexual experience contributes to rape culture by objectifying women and portraying those who are more sexually experienced as "unrapeable" — that is, if someone rapes such a woman, it excuses the rapist because it "didn't count."

Under the philosophy that a woman's virginity makes her more respectable, it is wrong to rape a woman not because she should have autonomy over her body, but because it is necessary to protect her integrity — and when a woman has more sexual experience, there is no integrity to protect.

3. Fathers Giving Away Their Daughters

The notion that a father can "give away" his daughter at her wedding hinges on the belief that a woman "belongs" to her father in the first place — and then to her husband. The focus on the father and the bride, as opposed to any other parent or spouse, feeds into the trope of the overprotective father who controls his daughter's love and sex life. Giving away the bride is the final opportunity for a father to exert the control that our culture gives him over his daughter.

4. The Focus On Women's Looks

When you go to a wedding, it's practically common courtesy to comment on how beautiful the bride looks — and how lucky the groom is to be marrying someone so beautiful. "Bridezillas" are frequently criticized for becoming control freaks about their weddings, but it's understandable that brides can lose it a little, given how much pressure there is for them to look and be perfect at their weddings. By putting more focus on the bride's looks than the groom's — and focusing more on how women will look than the inner qualities they will contribute to a marriage — we perpetuate the idea that a woman's primary role in a marriage or elsewhere is as a sexual object.

5. The Pressure To Take A Husband's Last Name

Though women might choose to keep their last names or take their husbands' for all different reasons nowadays, the original intent of the tradition was to make a wife her husband's property. This is also reflected in the fact that until 1993, there were states in which spousal rape was not illegal. Any tradition that considers a woman her husband's, to do with what he wants, perpetuates rape culture.

6. The Idea That Marriage Is Only Between A Man And A Woman

The prescription that the only valid couples are heterosexual is closely linked with the notion that two people in a relationship should play complementary roles. This means that one does the dishes and takes care of the kids, while the other is the breadwinner. It also means that one is dominant while the other is submissive, and one is the sexual initiator while the other is the gatekeeper whose desires aren't considered. By contributing to a system in which masculinity is equated with dominating women, especially in sexual situations, these stereotypes perpetuate rape culture.