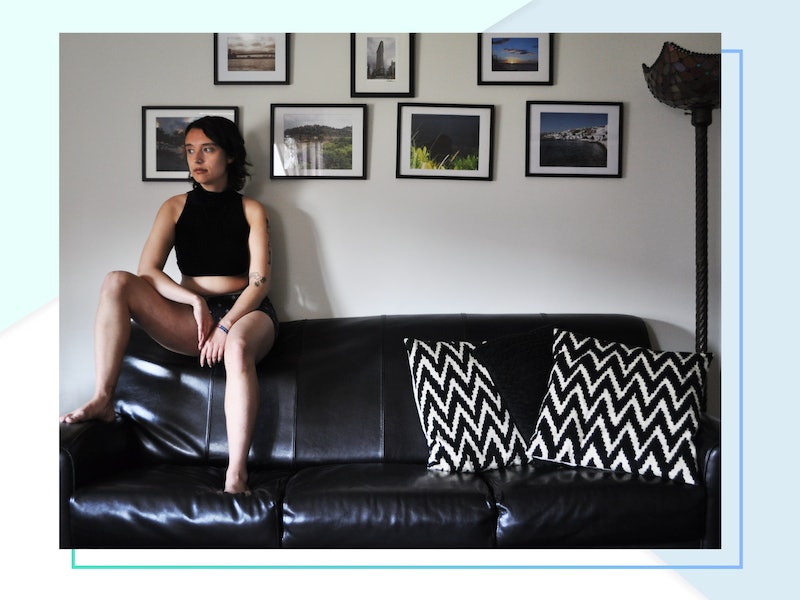 With award-winning photographer Substantia Jones of The Adipositivity Project , Bustle is launching A Body Project. A Body Project aims to shed light on the reality that "body positivity" is not a button that, once pressed, will free an individual from the horrors of beauty standards. Even the most confident of humans has at least one body part that they struggle with. By bringing together self-identified body positive advocates, all of whom have experienced marginalization for their weight, race, gender identity, ability, sexuality, or otherwise, we hope to remind folks that it's OK to not feel confident 100 percent of the time, about 100 percent of your body. But that's no reason to stop trying.

As a genderqueer journalist, trans body pos activist, and social media manager at Femsplain, Meg Zulch is acutely familiar with the ways that the gender binary influences culture and beauty standards at large. Vaginas, along with pink, Barbie dolls, and cooking, are for women; penises, along with blue, monster trucks, and bread-winning, are for men. But what if you fall somewhere on a spectrum? Not a man; not a woman. What if you don't feel like a woman all the time, but you still have a vagina?

"We need to realize that men have vaginas, women have penises, and a whole myriad of other identities have different and even more complicated genitals," Zulch tells me via email. "Learning not to equate gender with a person’s genitals would be great in dismantling social constructions."

For Zulch — who identifies with the gender-neutral "they" pronoun, rather than gendered pronouns such as "she" and "he" — discomfort over their vagina isn't just about gender identity, although that does factor in. "Having my period has made me feel super dysphoric on multiple occasions," they tell me, referencing the feeling of divide between one's true gender identity, and pre-determined sex. "I always hated getting my period because thanks to all the female imagery surrounding periods and menstruation hygiene products, it feels like the one week a month I’m forced to be a woman." With the exception of period-underwear brand Thinx, which recently used a transgender man in an ad campaign, little menstruation-related imagery, if any, has ever acknowledged that men or nonbinary individuals can have vaginas, and that those vaginas can bleed.

It isn't the physicality of their vagina itself that has caused Zulch the most discomfort, though. As they tell me, "I suppose it could be my excessive pubes that give me the impression that my vagina is masculine or gender fluid. I do sometimes wish I had a penis, [but that] can be remedied with strap-ons." Instead, they explain, the discomfort comes from a traumatic past.

When they were 12 years old, Zulch discovered that there was something "off" about their vagina. A failed attempt at inserting a tampon made them realize that vaginal penetration was unusually painful, if not entirely impossible. "Before I realized I had vaginismus, I was so ashamed and confused about how my body worked differently than others," they tell me. According to WebMD, vaginismus is a condition whereby a "vagina's muscles squeeze or spasm when something is entering [it], like a tampon or a penis. It can be mildly uncomfortable, or it can be painful." For some folks, it can make vaginal sex too unpleasant to bear.

Frustrated, if not enraged, by Zulch's feelings against vaginal penetration, a future partner would attempt to rape them. "My assault ended up shaping the way I feel about my vagina, which is often characterized by shame and embarrassment," they tell me. "I felt ashamed that I couldn’t have sex the 'right' way. Despite my [current] partner’s approval of our sex life and understanding of my condition, I can’t get my ex’s frustrated words and violent actions out of my head. Which consequently makes any therapy like vaginal dilating difficult since the very thought of my assault makes my muscles tense up more."

Zulch's current partner, Skylar, who also identifies as genderqueer, has been a huge cheerleader on Zulch's journey to body acceptance towards their vagina. "I always felt so weird and guilty that we couldn’t do the penis in vagina thing, though we did try once, since I’ve never had vaginal sex and don’t actually know what I’m missing out on," Zulch says. "[But Skylar] told me once that my condition is a blessing because it forces us to be really creative, and that the sex we have now is the most exciting and satisfying kind of sex they’ve ever had. And that makes me feel so cool."

When Zulch recently wrote a piece on vaginismus for Bustle, Skylar shared some further thoughts with them on the subject:

I think a lot of people get the idea that because we don’t have penetrative sex, there’s not much for us to do in bed. But to me, it felt like the complete opposite, because we were forced to think of other ways to pleasure each other that was not the vanilla P-in-the-V routine. Now, I was doing things I had never done in bed before, and never before had I had as much oral sex than I do now — which, to me, is the most pleasurable type of sex.

It's a thought that Zulch's therapist has echoed, too, telling them that they are more or less a "master of pleasure" since vaginismus has forced them to experiment with "alternative ways [to have sex] that aren’t 'vanilla.'"

For Zulch, it's important to spread the message that you can have vaginismus and still have an incredibly fulfilling sex life. You can be genderqueer, and have very much the same. You can experience trauma, and still recover enough to have the greatest sex of your life. "The thing is, sex doesn’t equal penetration. I know some people with vaginismus who consider themselves virgins, and lament over the fact that they can’t have 'normal sex.' But what does that even mean?" Zulch asks. "I’d advise those with vaginismus to stop invalidating their sex life. Go to a sex store, penetrate your partner instead, do some role-play, engage in a threesome. Trust me, sex is still interesting and euphoric even with a nervous vagina."

"Despite my timidity, which I think is often perceived as 'feminine' or 'cute,' I’m much more of a masculine person. It’s in my gestures, my walk, my assertiveness, my anger streak, and oftentimes in the way I dress," Zulch says. "My equal use of both feminine and masculine underwear is definitely emblematic of my own gender fluidity."

That said, there's a tangible air of relaxation to Zulch when they shoot in their boxers; when they feel seemingly freer to sit legs-spread; to eschew stereotypically feminine gestures or poses. They even seem more comfortable in their walk; in the way they relate to the lower half of their body — vagina included.

"Thinking of [my vaginismus] often makes me feel like a failure as a woman, even though I’m not a woman! Craziness. Or I guess like a failure as a vagina-haver and a sex partner," Zulch muses. "But as I reflect on it and I look at these photos, I know that my condition doesn’t make me any less of the kinky sex-obsessed person that I am. I don’t want to hate my vagina because it’s only responding to traumatic memories associated with abuse ... I don’t want to apologize for my history of trauma anymore, and I know that one day touching and looking at my vagina will be easier."