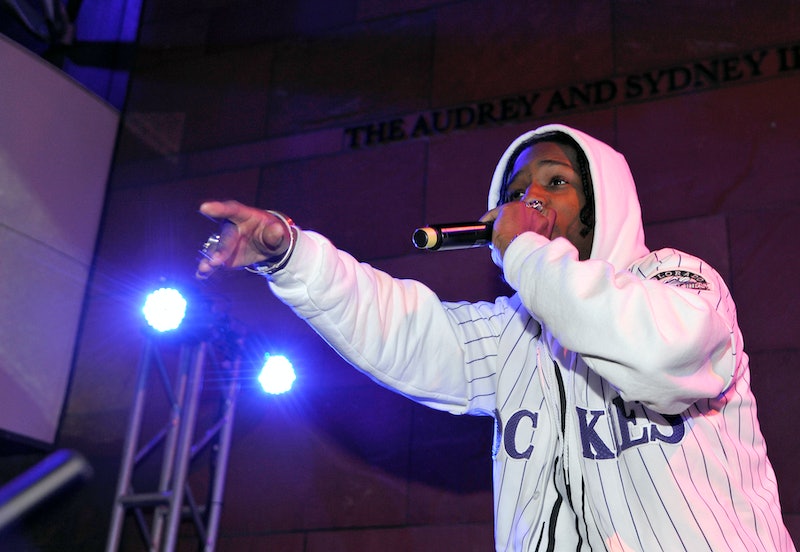 As if Divergent including Shailene Woodley and Kate Winslet in its main cast wasn't enough of a confirmation that it's bringing the awesome to the Young-Adult-novel-turned-film game in the way The Hunger Games brought strength and power, multiple tracks from the new film's soundtrack have been released this week and the latest is from non other than rapper A$AP Rocky.

Rocky's new track, "In Distress," not only stands out among numerous Y.A. soundtracks full of Taylor Swift and the plinky pixie tunes of Fiest and Ellie Goulding (okay, so Divergent still has her on the docket), the song also includes the work of French producer Gesaffelstein, who you may or may not recognize as one Kanye West's collaborators on his 2013 album Yeezus. So when you listen to "In Distress" (below) and have visions of West, you're not going insane — it just means your ears are working.

What's more is that while Rocky certainly feels like a surprise for a film that still relies so heavily on the forbidden relationship between Woodley's character and her co-star Theo James' Four (yes, that's a first name) in trailers, he's only one of a seriously surprising line-up of artists. It was also reported that the soundtrack will include new music from Chance the Rapper, Kendrick Lamar, and Tame Impala. Is this real life?

It is, and what's better is that the new music already released off the soundtrack — Rocky's "In Distress," M83's "I Need You," and Pia Mia's "Fight For You" — is already really, really good. It's getting to the point where we might see this movie just to hear all of this music in action. It could be TRON: Legacy all over again (terrible movie, awesome soundtrack) and we'd sit back, enjoy a computer-generated Winslet (which is the only way this movie could be just as bad as TRON), and soak up all of this incredible music just the same.

Trust us, you're going to want to check this out. Something tells us that if Divergent pulls a Hunger Games at the March box office, the YA movie genre will never be the same again.

For once, a Y.A. movie that knows how to get the rest of us newbs on board (or maybe on bort) too.