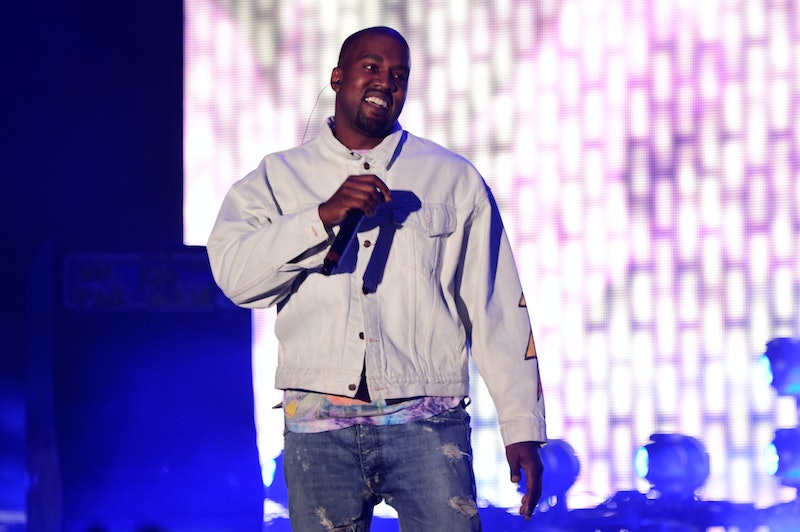 I'm so glad I stocked up on hot tea and honey, because I'm going to be gabbin' about this music video for a while (gotta look out for the vocal cords!). On Friday evening, Kanye West released the visual for “Famous” at a livestreamed event held at the Forum, and contrary to what many predicted, the video for the fourth track off of The Life of Pablo did not include the fabled audio that was taken when Taylor Swift allegedly approved a certain now-infamous “Famous” lyric. Instead, it featured a bunch of buck naked celebrities. Are they real, or are they wax? Are we looking at the nude bods of celebs, the nude bods of celeb impersonators, nude wax figures, or CGI renderings (in a recent interview with Vanity Fair, West was tightlipped about which celebs in the vid were real humans and which were prosthetic)? Whatever the case may be, it is worth noting that the naked celeb maybe-wax figurine roster included one Taylor Swift.

“It’s not in support or anti any of [the people in the video],” West said in the Vanity Fair interview. “It’s a comment on fame.”

Why did many of us (myself included) expect that this video would address the alleged T. Swift recording? A quick recap: On Feb. 11, 2016, West threw a The Life of Pablo listening party/fashion show at Madison Square Garden. The fourth song of the evening (and arguably one of the most talked-about songs of the evening) was a record titled "Famous." In the first 30 seconds of the track, West raps, “I feel like me and Taylor might still have sex/Why? I made that b*tch famous (God d*mn)/I made that b*tch famous." Shortly after "Famous" made its debut, you couldn’t throw a Yeezy Boost without hitting a take about that line. The general consensus: The lyric was a reference to the iconic “I’mma let you finish…” moment that happened during Swift’s acceptance speech at the 2009 MTV Video Music Awards (and everything that transpired afterward). Swift's brother wasn’t happy with the lyric, many fans weren’t happy with the lyric, West insisted Swift OK’d the lyric, Swift insisted she didn’t OK the lyric, and Swift called out someone in her 2016 Grammys acceptance speech (and yes, that someone is presumed to be West).

When West tweeted that Swift had given the lyric the thumbs up, the “Blank Space” singer’s rep released the following statement:

Kanye did not call for approval, but to ask Taylor to release his single "Famous" on her Twitter account. She declined and cautioned him about releasing a song with such a strong misogynistic message. Taylor was never made aware of the actual lyric, "I made that b*tch famous.”

Fast-forward a few months: In the July issue of GQ, Kardashian addressed her husband’s lyric about someone named Taylor.

“She totally approved that,” Kim says, shaking her head in annoyance. “She totally knew that that was coming out. She wanted to all of a sudden act like she didn't. I swear, my husband gets so much sh*t for things [when] he really was doing proper protocol and even called to get it approved.” Kim is on a roll now, speaking faster and more animatedly than at any other point during our time together. “What rapper would call a girl that he was rapping a line about to get approval?”

She went on to say that they were filming at that time, so the conversation—which allegedly included a moment when Swift signed off on the lyric— was recorded:

"And then they sent an attorney's letter like, ‘Don't you dare do anything with that footage,’ and asking us to destroy it.” She pauses. “When you shoot something, you don't stop every two seconds and be like, ‘Oh wait, we're shooting this for my documentary.’ You just film everything, and whatever makes the edit, then you see, then you send out releases. It's like what we do for our show."

When GQ reached out to Swift, her rep replied with the following statement:

Taylor does not hold anything against Kim Kardashian as she recognizes the pressure Kim must be under and that she is only repeating what she has been told by Kanye West. However, that does not change the fact that much of what Kim is saying is incorrect. Kanye West and Taylor only spoke once on the phone while she was on vacation with her family in January of 2016 and they have never spoken since. Taylor has never denied that conversation took place. It was on that phone call that Kanye West also asked her to release the song on her Twitter account, which she declined to do. Kanye West never told Taylor he was going to use the term ‘that b*tch’ in referencing her. A song cannot be approved if it was never heard. Kanye West never played the song for Taylor Swift. Taylor heard it for the first time when everyone else did and was humiliated. Kim Kardashian's claim that Taylor and her team were aware of being recorded is not true, and Taylor cannot understand why Kanye West, and now Kim Kardashian, will not just leave her alone.

Though West didn't release the alleged tape, it looks like "leave her alone" won't be happening anytime soon: A week and a half after the GQ profile hit e-newstands, the "Ultralight Beam" rapper released a music video that features Maybe-wax T. Swift sleeping next to Maybe-wax West and Maybe-wax Kardashian. So. There that is.

What does this mean for the West/Swift feud from here on out? Uh, I don't know. Maybe they'll hash out their issues at a candle making class? (Sorry. Couldn't stop myself from running with the wax theme before it was too late.)

More like this
Kim Kardashian Reacts To Kanye West’s Diss Song “Eazy” On 'The Kardashians'
By Jake Viswanath
Britney Spears Met The Weeknd & Sam Levinson, So She May Actually Be On 'The Idol'
By Jake Viswanath
Taylor Swift Knew Hayley Kiyoko & Becca Tilley Were Dating 4 Years Ago
By Grace Wehniainen
Mick Jagger Calls Harry Styles A "Superficial Resemblance" To His Younger Self
By Jake Viswanath
Get Even More From Bustle — Sign Up For The Newsletter