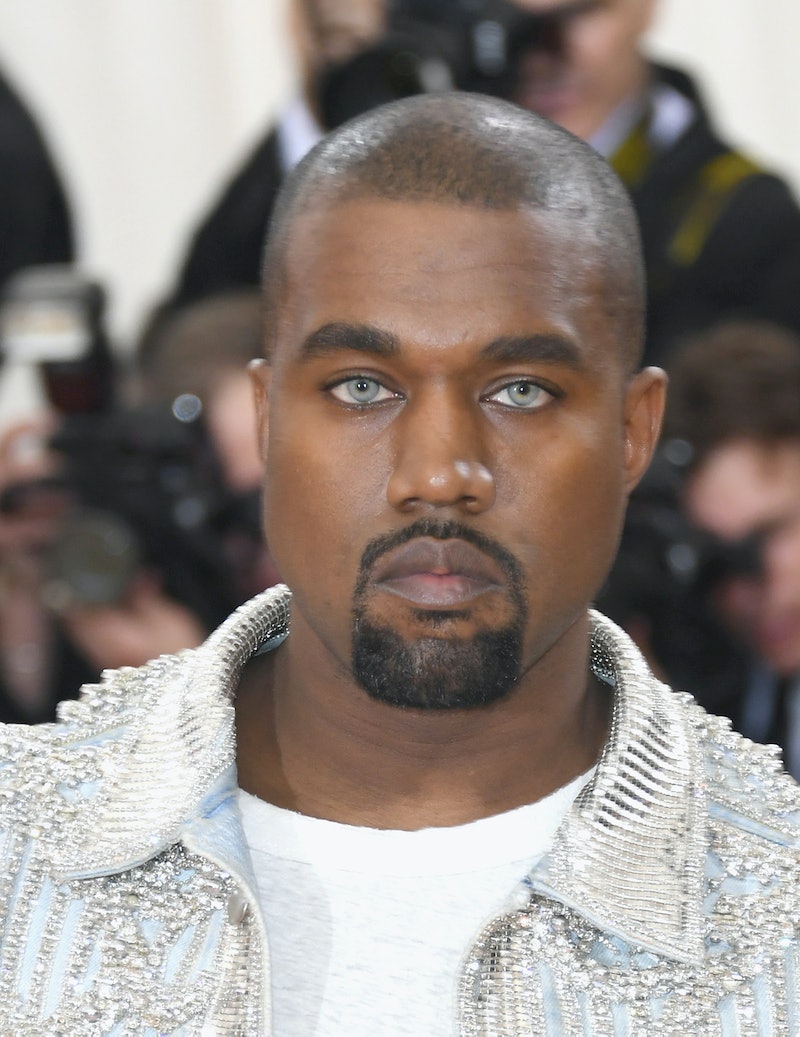 On Friday evening, during an event held at The Forum in Los Angeles, Kanye West released the video for "Famous," the fourth track from The Life of Pablo — and wow, is it something. Described by West in Vanity Fair as being "a comment on fame," the video shows what can only be described as a very sleepy, nude group of famous people sharing a very large bed with him and wife Kim Kardashian West. The naked celebrity line-up reads like a long list of mentions from West's very own social media feed, featuring famous people that West has fought with, defended, celebrated, thanked, or made mundane casual chit-chat with over the past year or so. The likely fake, unclothed celebrities featured in West's "Famous" video include Taylor Swift, Amber Rose, Ray J, Chris Brown, Rihanna, Caitlyn Jenner, Bill Cosby, Anna Wintour, Donald Trump, George Bush, and of course, West and Kardashian.

The likelihood of the majority of these celebrities being genuinely naked or even actually physically present in this video is pretty slim. (According to TMZ, Trump's rep has denied that is actually Trump in the video, according to Us Weekly, Bush's rep simply stated of the former U.S. president's inclusion in the clip, "That's not him," and on Instagram, Chris Brown thanked West for his inclusion but made it clear it was not actually him in the video. Per Us, reps for Wintour and Jenner had no comment.) However, it begs an even bigger question: Did any of the celebrities in the "famous" give their permission for their likeness to even be used? (Bustle has reached out to Kanye's camp in regards to this question, but has not yet heard back — but it is worth noting that, on Saturday, West tweeted, "Can somebody sue me already #I'llwait.") Considering the vulnerable nature of the video, with celebrities posed in their bare flesh, this raises all manners of questions. For starters, is it morally OK to use such likeness of famous people if your reasoning is simply that it's all in the name of art? It seems to fair to say that this is the thinking behind West's video who revealed at The Forum that the tableau was inspired by Sleep, a huge mural by American realist painter Vincent Desiderio.

From a legal standpoint, West is actually, and surprisingly, safe to have used the likeness of celebrities in the video. According to the Digital Media Law Project, "celebrities cannot sue for misappropriation of name and likeness (on the theory that they have no privacy interest to protect)." This goes for those who are running for president (which is why you will often see their likeness parodied on shows like Saturday Night Live). When it comes to works of art, however, the issue becomes a little trickier: There have been past court cases regarding the use of a celebrity likeness in artwork which have outlined such use of a likeness as fair so long as it's used as a clear form of expression, rather than as a product, advertisement, or endorsement. Though a court could still potentially argue that West is using the video for publicity, it's also easy to see that he's using the likeness of these celebrities to express a viewpoint and provoke public debate above all else.

In fairness to West, his use expressive usage of the likeness of celebrities in this way also definitely works as a strong commentary on the nature of fame and celebrity. The persona of any given celebrity is accepted as truth by the media and the consumers of that media, even if it isn't how they actually are in real life. By arranging these celebrities in such a way that they appear almost lifeless yet complicit, West is also objectifying and dehumanizing them, and as such, appears to be making a statement about how society itself seems to dehumanize celebrities in the very same way.

However, there's still something inherently troubling about the way in which these celebrities — particularly the female ones included like Swift — are presented in this incredibly vulnerable way. If they had no say in the choice of being portrayed in this manner, then "Famous" isn't just a commentary on fame, but an act supporting the grotesque manner in which famous people can have their most vulnerable and private moments unjustly leaked and exposed to the public. Even if that's the message West was trying to deliver with this video, it doesn't change the fact that he's also actively adding to this culture, and appears to be doing so with a deft, provocative swagger. Take his aformentioned tweet from Saturday, in which West took to Twitter to actively encourage his faux-celebrity bed buddies from the video to sue him:

Vulnerability might not seem like much of a threat to a man like West, but to many celebrity women, it is. It wasn't that long ago, it must be remembered, that hundreds of nude pictures were stolen from the iClouds of many high-profile female celebrities, and posted online without their permission. Though "Famous" is nowhere near hitting the same profound invasions of privacy with its representations of these nude celebrities, it still skates close enough to their exploitative and damaging spirit. Men like Brown or Ray J might not feel the same level of grotesque exposure that a woman like Swift, Rose, or Rihanna might when watching this video, but they're still entitled to feel the same levels of rage regarding them.

When celebrities like Rose or Rihanna post provocative images of themselves online, they're women celebrating their bodies and their sexuality — it's an act of empowerment for them. They're taking back control over their own image from the many people who have used their sexuality as a means for shaming them. On the flip side, "Famous" seems eager to use this very aspect of their celebrity against them. It completely removes everyone's agency.

As such, "Famous" may make a valid commentary on fame, but it's also a juvenile one. Like fame itself, the statement the video makes is surprisingly superficial, and still a little exploitative.