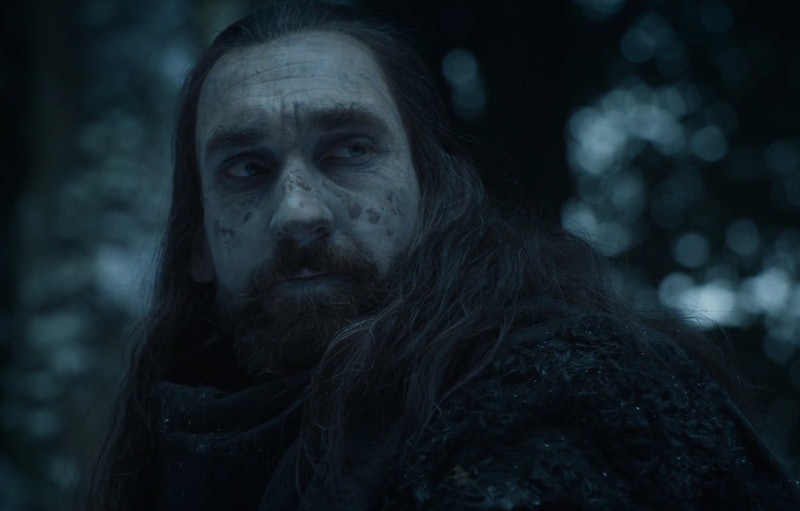 For as long as The Wall has been a looming presence on HBO's Game of Thrones, there has been the possibility that it could fall. Separating the north of Westeros from the even more northern, wild area beyond, The Wall on GoT has always been under threat. First, the Wildlings tried to push through, and it was discovered that they were running from an even bigger danger: the White Walkers, the ice-wielding, horse-riding winter lords and their army of undead Wights. It can be assumed that, because they're currently on the other side, the White Walkers are such a threat solely because at some point, The Wall is going to fall. But how? Why? And by whose hand?

Well, in the insanity of the Season 6 finale, in which fans saw Cersei blowing up the Sept, a returned Arya slaughtering Walder Frey, the confirmation of R+L=J, and Daenerys finally heading to Westeros with her giant army and dragon escort, viewers may have missed a key bit of info provided by sorta-zombie-Benjen Stark. Just before he leaves Bran and Meera, Benjen says, "The Wall's not just ice and stone, ancient spells were carved into its foundation. Strong magic, to protect men from what lies beyond. While it stands, the dead cannot pass." That would mean that the White Walkers, being dead and all, cannot pass through the enormous structure to attack Westeros to the south, right? Unless something were to happen to say, bring The Wall down?

The "war to come," as it's been called, has been prophesied for far too long and set up on the show for multiple seasons too much for it to not actually happen. Fans may not yet be sure how the great war between the White Walkers and Westeros will go down, but the certain thing is that it has to happen — otherwise, why spend all that time talking about it, and setting up the White Walkers as a long-term threat amidst more intimate, short-term battles happening all over the show? It's clear that The Wall must come down. But how?

Well, there's always the Horn of Joramun, which has been missing for, oh thousands of years. As Nerdist recounted, "Jormaun was a King-Beyond-the-Wall who is credited — along with Brandon the Breaker of Winterfell — with helping defeat the Night’s King. The legend says that when Joramun blew the horn the first time he raised the giants, but that blowing it again will bring down The Wall." If the White Walkers find the horn, they could easily bring down The Wall, but have fans even seen it on the show? As it turns out, maybe. When Sam finds the haul of dragonglass at the Fist of the First Men, there was an old, broken horn in there with the stash. It's not clear if Sam still has the horn, but the horn on the official cover of The Winds of Winter , the next book in George R.R. Martin's series, is pretty suggestive.

But could The Wall fall of its own accord, somehow? Ned Stark always said that The Wall is only as strong as the men who defend it, and the Night's Watch hasn't been, shall we say, the most cohesive lately. First, mutineers murdered Lord Commander Mormont in a coup, and then other Night's Watch soldiers murdered Lord Commander Jon Snow in retaliation for allowing the Wildlings through. So they're not exactly working together towards the same goal, nor do they seem particularly strong, so it's quite possible that they won't be able to come together to keep The Wall going. Then again, there's always the possibility that Daenerys' dragons will simply melt The Wall with their fire. Should that happen, perhaps a giant moat or sea will be created, separating the northern areas from the rest of Westeros through a giant body of water. The White Walkers at Hardhome didn't seem too keen on water, asthey didn't pursue Jon Snow or the others once they set out to sea, so perhaps that will keep them at bay.

Finally, there's the theory that Bran Stark himself with cause the fall of The Wall. Film School Rejects theorized that the Night King might go about getting around the magical protections that The Wall holds. "Perhaps by touching someone (like Three-Eyed Raven 2.0 Bran Stark) and marking them with his own magic. Then once Bran passes through The Wall, the spell is broken. Let’s say Bran needs to get south of The Wall because he just figured out some game changing information about another character — like Jon Snow’s true parentage," the site wrote. It would make sense for Bran to be the one to do it. After all, he is named after Bran the Builder, the Stark that built The Wall. That The Wall would be both built and destroyed by a Brandon Stark would be a kind of prophetic occurrence similar to the ones Martin enjoys employing in this series.

And as it turns out, Bran actor Isaac Hempstead Wright may have given that element away. In an interview with Yahoo! Singapore, the actor hinted that Bran could cause some major damage in Westeros. The Yahoo! Singapore interview was reported by iDitigalTimes , which wrote, "Wright described his 'extraordinary enabling abilities,' suggesting that he’ll be far more than an observer in Season 6. Here’s where things get really crazy. Though a full quote from the interview was not provided, Yahoo! Singapore, paraphrasing Wright, said, 'he may even cause an ‘earthquake' in Westeros.'"

If The Wall does fall, I bet it would sound and feel much like an earthquake. If Bran brings The Wall down, fans can probably assume that it won't happen until Season 8, when the show is reportedly ending. After that, all hell may break loose, but we'll just have to wait until 2018, and try to not melt in the meantime.