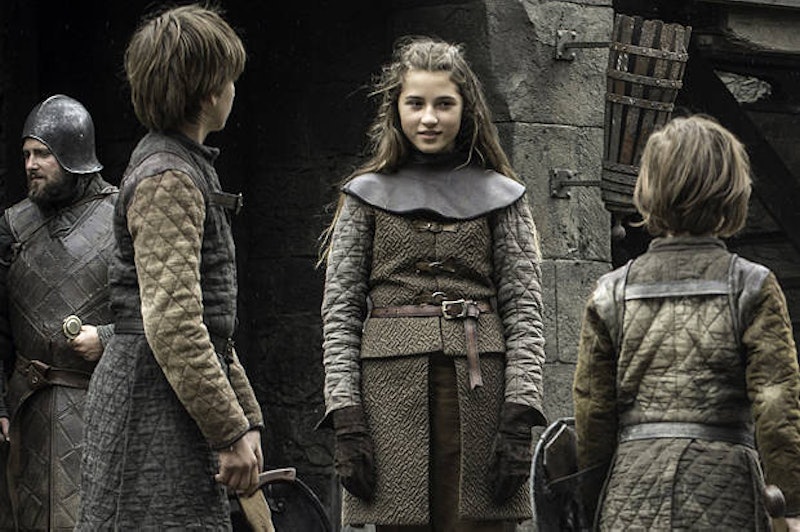 Of all of the characters in HBO's Game of Thrones, the one who inspires the most fan theories has got to be Jon Snow, played by Kit Harington. Be they about his long-suspected resurrection or his mysterious parentage, Jon has remained a huge mystery throughout the show's first five seasons, and now that fans are ankle-deep into Season 6, we're starting to get the answers we've craved. One mystery — his death — was solved at the end of Episode 2, and another mystery, his parentage, began to unfold in Episode 3 when Bran saw his father, Ned Stark, fight Aerys' Kingsguard at the Tower of Joy, and run upstairs to his screaming sister. It's likely that we're going to get the second half of that story soon, but as I see it, this Game of Thrones flashback's conclusion needs to unfold in a very specific way.

For those who may not be familiar, the R+L=J theory, involving this flashback, has been a part of Thrones since day one. Book readers have long suspected that Jon Snow's parents aren't actually Ned Stark and some unnamed woman, but rather, that Jon is the offspring of Ned's sister, Lyanna Stark, and Rhaegar Targaryen, son of the "Mad King" Aerys and older brother of Daenerys. Lyanna was once betrothed to Robert Baratheon, but, as the show has often said, she was kidnapped, raped, and imprisoned by Rhaegar. Robert then started a rebellion, with the help of the Lannisters and Starks, beginning the war that would eventually end with him on the throne. The citizens of Westeros accepted that version of the events, so it's become common knowledge that the rebellion was retribution for Rhaegar's dastardly deed. But what if that was all a lie?

You see, while the characters within Westeros may believe that Rhaegar kidnapped Lyanna, book readers and show fans have an alternate theory: Lyanna wasn't kidnapped at all. Instead, she and Rhaegar were actually in love and ran off together. There's ample evidence in the novels to support the idea that the duo were in love — at a jousting tournament at Harrenhaal, for instance, Rhaegar, after winning the tournament, was supposed to crown any woman present the "Queen of Love and Beauty." Rather than give the crown to his own wife, Elia Martell, aka Oberyn's sister, he gave it to Lyanna, who was already engaged to Robert. The whole event caused a scandal, since the crown is meant to symbolize attraction or love, and both the giver and receiver of it were tied to others.

So later, once the war had ended, when Ned found his sister at the top of the Tower of Joy, lying in a bed of blood, she whispered to him, "Promise me, Ned." It's all but confirmed here that she was imploring her brother to take care of her infant son, Jon. Robert had been slaughtering everyone he could find with Targaryen blood, so it could only be assumed that he'd kill Lyanna's child, too. So, of course, noble Ned took it upon himself to protect the baby and lie about his lineage.

But whether or not Jon's parents are who fans think they are is less important than how he was conceived, and how this will be shown in Thrones. As many people have noted the show has made a lot of mistakes when it's come to portraying rape and sex on screen. First, there was Daenerys' wedding night sex to Kahl Drogo, which was a consensual act in the novel, but because a cringe-worthy act of force in the pilot. Then there was the fact that Jaime and Cersei's love-making at their own son's funeral was a tender moment between the two on the page, but an unneeded act of rape on the show. And then, perhaps most controversially, there was Sansa's brutal wedding night rape by Ramsay Bolton, which was added to the series; it doesn't exist at all in the novels.

Game of Thrones needs less rape, and the Lyanna flashback should not incorporate violence. I'm hopeful that the show will reveal that Jon was conceived because of rebellious love, rather than another man sexually violating a woman. Perhaps Bran's next warging into the past will reveal that Lyanna told Ned the truth about her relationship with Rhaegar, and in asking him to protect her son, she really wanted him to protect a child created in love, a child who is the personification of The Song of Ice and Fire. It's true that the rape vs. love conundrum could unfold differently in George R.R. Martin's upcoming books, but on the show, it simply must turn out that Lyanna and Rhaegar were together as a happy couple. Even if Martin does write the scene as a rape, the series could change things; if they added a rape to the show, they can certainly take one away. Doing so would not only provide some much-needed sexual consent into the Thrones world, but it would also add Lyanna's own wants, needs, and desires to a show that has for too long only seen her as a haunting ghost.