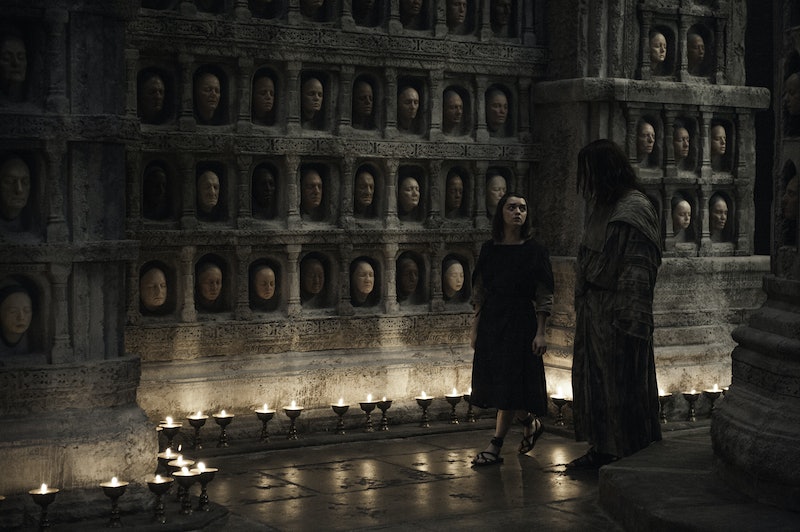 For a few seasons now on Game of Thrones , Arya Stark has been determined to leave the rough world of Westeros behind and start life anew as a faceless assassin in Braavos. After successfully escaping The Hound and sailing off into the sunset at the end of Season 4, Arya found herself at the House of Black and White, where she began to train with Jaqen H’ghar. As a servant of the Many-Faced God, she would become anonymous; she would have to assume the identity of “no one,” and leave behind her life as a Stark. For awhile, that's exactly what she did — but what if it's not what Arya wants anymore?

The most recent episode of GoT left multiple clues that Arya might abandon her quest and return home — although at first, that might seem like a bad idea. So many horrible things have happened to Arya and the Stark family over the past six seasons. She lost her direwolf Nymeria when she was forced to make her furry companion run away, out of fear that the Lannisters may have her killed; her father was beheaded; she was taken captive; and her brother and mother were brutally slaughtered by a family that was supposed to be their allies. It’s no wonder that Arya took to Jaqen, and the life he leads as a Faceless Man, and chose to abandon Westeros to seek out something new.

But her training hasn’t gone as planned. Though she was on assignment from Jaqen, she couldn’t resist using one of the many faces to sneak into a brothel and murder Meryn Trant, one of the names on her kill list. The deed earned her temporary blindness and daily beatings from another "no one" in training. Now that her sight was returned, Arya's training has resumed, but is it me or does her heart seem less into it now? I'm starting to think that pretty soon, Arya might ditch her quest to join the Faceless Men and instead head back to Westeros to reunite with her family. To many fans, it's always been obvious that Arya was never going to stick with this life when she chose to hide her sword Needle, instead of getting rid of everything Arya, as Jaqen instructed.

In the most recent GoT episode, "The Door," Arya seemed awfully tired of all of the "no one" talk. She obeyed Jaqen's instructions and still referred to herself as "no one," but she seemed a little jaded about the whole thing and asked questions that Jaqen doesn't seem to like. Jaqen pointed out that none of the Faceless Men have ever been born to Lords or Ladies, as they were all slaves, which makes Arya an outsider. She operates as if she's totally willing to buck the trend and be the first, but Jaqen's mention of her difference might have been a subtle hint to the audience that Arya might not be suited for the role after all. "A girl has been given a second chance," Jaqen said in the episode, referencing her punishment for killing Trant. "There will not be a third." Something tells me that Arya might indeed do something in the future to have warranted that threat now.

But the big hint for me that Arya's devotion to the Faceless Men was waning came when she had to watch a piece of street theater. Arya was instructed to plot the killing of an actor, but while on the prowl she encountered a situation that emotionally affected her, whether she wanted it to or not. The play turned the beheading of Ned Stark and his dealings with the Lannisters into a joke and his death into a comedy. Arya was visibly bothered by how her father and her sister, Sansa, were presented in the show as buffoons and idiots. She squirmed when the actor playing her sister had her breasts exposed and detailed her forced marriage to Tyrion Lannister. Arya and Sansa were never close when they were younger, but it appeared that that moment of embarrassment and anger was the most connected Arya had ever felt to her sister. Robb, Catelyn, and Ned are all gone, and Arya has been on her own for quite a while. It's perfectly logical that she'd suddenly miss the ones that are still alive and want to return to them.

And why shouldn't she have a change of heart? Becoming a servant of the Many-Faced God doesn't exactly sound like something Arya is destined for. I think this episode was truly hinting at the idea that Arya might abandon that path for good and seek out her fellow Starks. After all, they've already begun to reunite. With Jon Snow and Sansa back together, they're now heading to Winterfell to rescue Rickon. With Bran's discovery of his new powers, he may head south as well. The tides are turning, and the Starks are pointed back towards one another. So when Jaqen tells Arya that "A girl must decide if she wants to serve the Many-Faced God," and Arya responds, "A girl has decided," I'm thinking she has decided — not to stay.