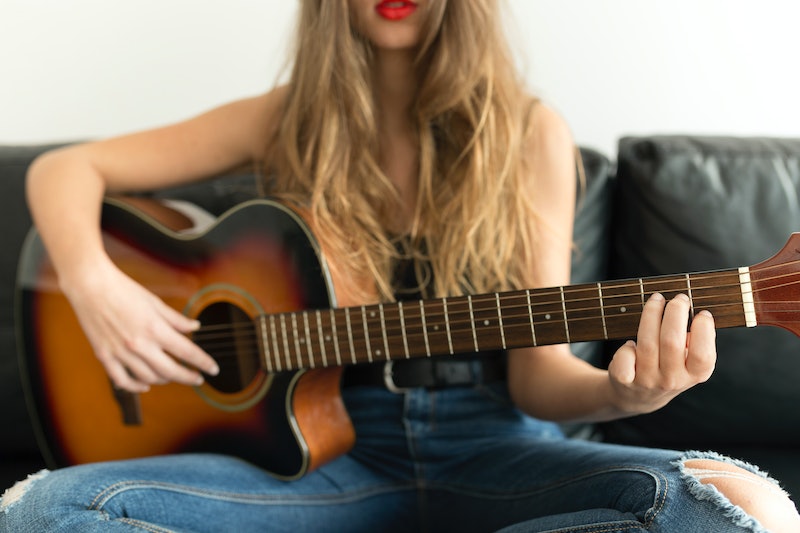 For as long as I can remember, people have called me a sensitive person, and they haven't been wrong. Though I've never actually been diagnosed as a highly sensitive person, (HSP) a number of online quizzes and my own personal experiences have reasonably lead me to believe that I am one. I mean, I've pulled my car over to help turtles safely cross the road more times than I can count. (Really.) When I attend improv shows, plays, concerts, or any other form of live entertainment, I get nervous for performers that I've never met. And whenever someone's brutally murdered on Game of Thrones, (which is basically always, because George R.R. is the worst), I literally can't watch. So, yeah, I'm definitely a super sensitive person, and I'm finally starting to be OK with it. What I'm not OK with, though, is the notion that sensitive people aren't strong — because being a sensitive person doesn't make you weak.

Yes, sensitive people tend to cry a lot, we typically berate ourselves for way too long after we've made a mistake, and because we hate confrontation, sometimes we go overboard on the people-pleasing stuff. That said, emotionally speaking, sensitive people are basically super humans. Sensitive people are naturally more intuitive than anyone else, we're passionate AF, we're literally hardwired to be more polite than the average person, our capacity for empathy is next-level, and though we may not always want to be alone, we're not bad at it, either.

So if you (like me) have tried to desensitize yourself for years without success, maybe it's time to let that sh*t go and just be your sensitive self. Because, despite what you've probably been told, there are lots of reasons being sensitive shouldn't make you feel weak.

OK, so your first step on the road to feeling sensitive and strong simultaneously is acknowledging the fact that no one chooses to be highly sensitive. As Bustle reported back in 2014, "Highly Sensitive Person" is an actual scientific diagnoses that affects about one in five adults.

This was discovered a couple of years ago when researchers at Stony Brook University in New York used fMRI (functional magnetic resonance imaging) to study the differences between how supposedly sensitive and non-sensitive people responded to social cues. When both groups were shown pictures of faces, researchers found that the sensitive subjects experienced "mirror neuron" activity. Essentially, this means the HSPs were actually feeling what the person they were shown appeared to be feeling.

If you're highly sensitive, it's not because you're emotionally weak, it's not all in your head, and it certainly doesn't mean you aren't a strong person. Actually, it means just the opposite — because it takes a lot of strength to walk around feeling everyone else's feels, plus your own, without bursting into tears on the regular. (Though there's nothing wrong with crying, really, so don't feel bad if you've ever cried in public. I know I have!)

2. Being Highly Sensitive Probably Makes You Hyper-Aware Of Your Surroundings — In A Good Way

Sensitive people are naturally more detail-oriented, and since we're so easily stimulated by our surroundings, we typically miss very little. While I know from experience that this can be over-stimulating, it's actually also kind of awesome when you think about it. Of all your friends, you're the person who is most likely to spot the little things going on around you, and that can really come in handy.

If you and your buddies are on a road trip, you're the one who pays attention to exits and gas stations while everyone else is caught up in tunes and stories. When you go hiking, you probably make a point of familiarizing yourself with landmarks and any signs of wildlife so you can avoid getting lost in the woods and/or murdered by bears. And when you hit up a bar or a theater, you know where the bathrooms and exits are within seconds of walking through the door. So the next time you feel bad about your hyper-awareness, don't; this inherent trait of highly sensitive folks is part of what makes you the person everyone would want to be around in the event of a real-life zombie apocalypse.

3. Being Highly Sensitive Probably Makes You An Exceptional Friend

As the above-mentioned study shows, highly sensitive people have a capacity for empathy that goes above and beyond what the average person typically feels — which means we're literally more emotionally reactive. When a friend comes to us with a problem, it's more than likely that we'll feel deeper concern for them and their situation than their non-sensitive buddies would. Of course, I'm by no means suggesting that non-sensitive people can't also be great friends, but science suggests that sensitive people simply feel more deeply about everything — and that includes how we feel about our friends and their problems.

The fact that sensitive people are naturally more empathetic toward everyone means we're more likely than non-sensitive people to pick up on our friends' moods and react accordingly. Highly sensitive people feel good feelings more deeply than the average person, too — and it usually doesn't take very much for us to feel positive feelings, either. The depth of joy and gratitude sensitive people feel after receiving one genuine compliment, or enjoying a truly delicious cup of coffee, or having a meaningful conversation with someone we care about is so overpowering — in a good way — that it's practically infectious.

4. Being Highly Sensitive Probably Makes You More Creative Than Others

Since sensitive people have to find healthy outlets for conveying our many feelings so we don't figuratively implode, sensitivity and creativity tend to go hand in hand. Not only is nurturing creative hobbies and pursuing creative careers a super cool thing to do, (whether you're sensitive or not) the creative work of sensitive people in particular can offer a unique perspective that most people wouldn't otherwise experience.

Sensitive people both see and interact with their world differently than the majority; so the stories we write, sketches we draw, and music we make can translate into beautifully unique expressions of what it's like to be a highly sensitive person — and that's definitely something to be proud of.

5. Being Highly Sensitive Probably Makes You More Responsible Than Most

For me personally, two of the most frustrating traits of highly sensitive people is that we usually take forever to make decisions, and when we make a decision that we later deem to be a "bad" one, we beat ourselves up over it for an unnecessarily long time. It's not very fun, and it can be debilitating if you let it — but it also means you're probably super responsible most of the time, and that's a good thing.

While I can tell you from experience that taking your choices extremely seriously all the time usually feels like punishment, it will also likely pay off in the long run. Ultimately, if you take your time making big decisions, and you care about how even your smallest decisions will affect your finances, health, career, and relationships, then you're probably doing way better than you think you are at this whole life thing.

So be proud of all the ways being sensitive makes you strong, OK? And maybe avoid listening to too many sad songs if you're a person who enjoys wearing mascara.