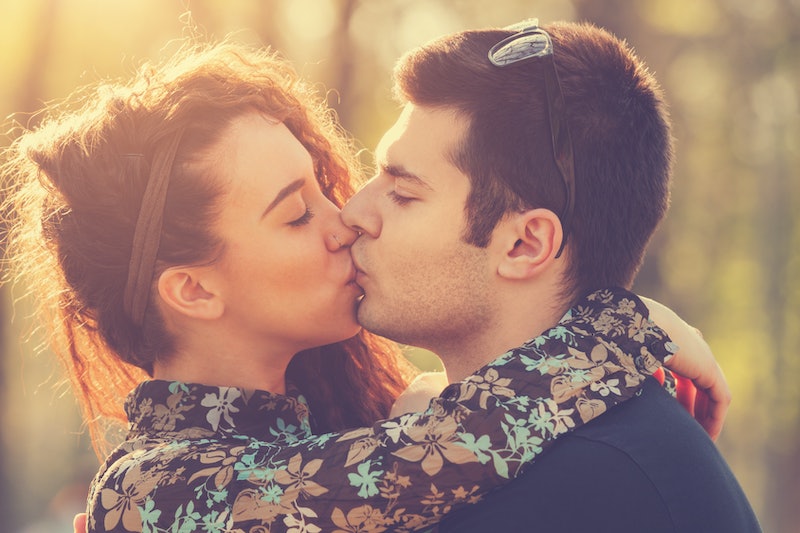 In honor of the big day, online dating site Zoosk surveyed over 1,000 of their members to get their thoughts on kissing. From how many people think kissing and making out on the first date is a good idea to the number one don't when you're locking lips, they found out what kissing means to singles today. Although why we kiss is still up for debate, since not all cultures kiss, we should consider ourselves very lucky to be part of one that does. Kissing shouldn’t be taken for granted or seen as a “base” one has to touch before they can “score” a home-run, but be appreciated as it is on its own.

Because you’ll most definitely be wanting to lock lips with someone this International Kissing Day, here’s what you might want to know about kissing. So pop a mint, re-apply that chapstick, and get ready to celebrate the holiday.

1. Almost Half Of Singles Think A First Date Kiss Is A Good Idea

According to Zoosk’s findings, 47 percent of those surveyed think that kissing at the end of a first date is “acceptable,” which is great news for those of you who believe in trying out a kiss before locking down a second date (like me!). But while that 47 percent are all for smooching on date #1, 29 percent think that kissing should be saved for the second date, and 24 percent feel that kisses should be held off even longer.

2. Most People Are Against Making Out On The First Date

3. Bad Breath Is The Number One Killer For Kissing

Well, no shocker here… but, yes, for 66 percent of the singles surveyed, nothing can kill the mood quite like bad breath. Coming in second place as another kissing pet peeve, at 15 percent, is too much tongue, because let’s be honest, too much tongue is never a good thing.

Although alcohol can lighten the mood and ease first date jitters, 70 percent of singles would rather be sober than drunk when it comes to the first date kiss. Why? Because they want to remember the moment… or, in other words, decide whether or not the kiss warrants a second date.

5. Both Men And Women Love Being Kissed On The Neck

While the lips are the first choice spot for kisses, both men and women choose the neck as their second favorite spot for being kissed. According to the survey, 63 percent of men and women rate this as their favorite body part to be kissed outside the mouth. As for a place that doesn't win much approval, that one goes to the forehead. Only two percent of men like being kissed on the forehead.

6. Men Have A Harder Time Remembering How Many People They’ve Kissed

While 29 percent of women say they’ve kissed somewhere between zero and seven people, the same percentage of men have no idea how many people they’ve kissed because it’s “too many to count.” Basic math leads me to believe that these guys are probably not in the 70 percent of people who want to remember their kisses... buy, hey, whatever works for you!