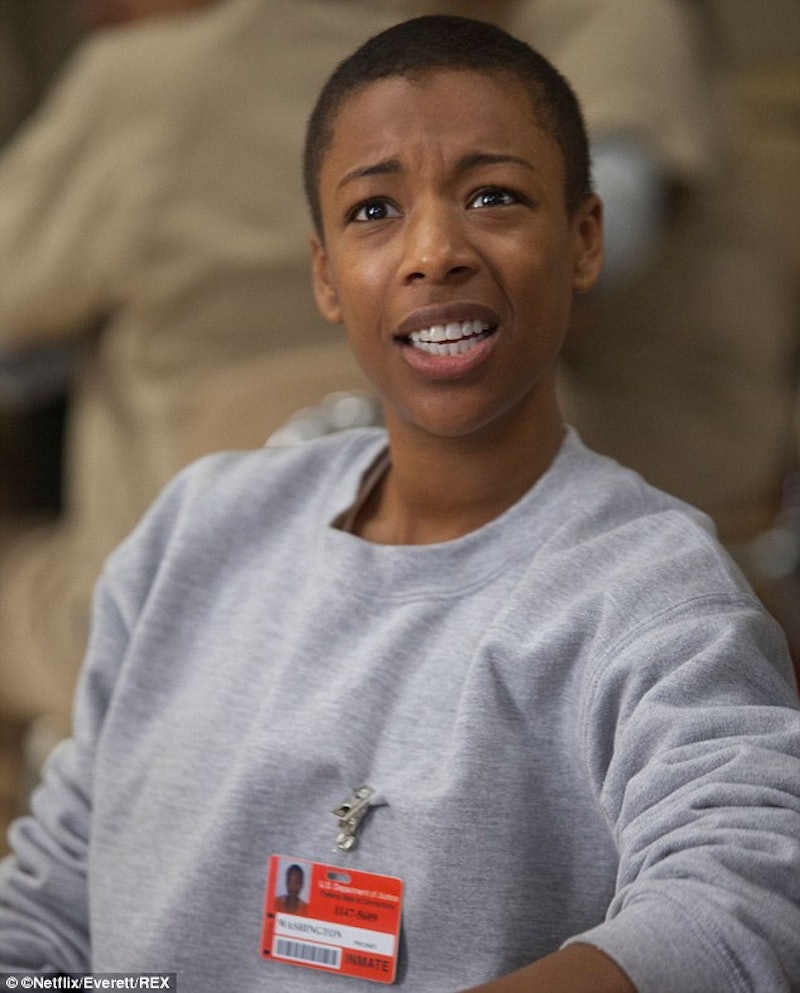 I watched all of Orange Is the New Black Season 4 on the day it came out (be warned, spoilers are coming), and I don't think I'll ever be over that shocking finale, no matter how much time passes. But while I've been grappling with Poussey's death on OITNB for days, actor Alan Aisenberg — who plays her killer, C.O. Bayley— has known about it for months. The man behind the murderer spoke to Bustle at the Orange Is the New Black premiere party, hosted by the Women’s Prison Association. Aisenberg says that he felt a flood of emotions upon learning that he'd be the one to kill Poussey in Season 4.

"As a fan of the show ... yes I'm totally on board with [her dying]. That's what needs to happen," he says. "As an actor, I was terrified to have to figure that out. It was every emotion since we shot that in October to now. I felt excitement, I felt terrified, I felt fear — literally every emotion."

Poussey's death, while shocking and upsetting, also felt necessary to me as a viewer. I know there are some who feel differently because losing a nonwhite LGBT character comes as a blow to representation. But in another regard, her death actually increased a focus on representation. Because Orange Is the New Black's cast is made up of so many women of color, to not comment on the Black Lives Matter movement or the fact that such people are frequently dying at the hands of law enforcement would undermine the rest of the season, which did much to explore racial tensions within the prison. It's frustrating that Poussey had to fall victim to this type of abuse, but I think her death illustrated a really important point: It was an accident, but that doesn't mean it should go unpunished, as is all too often the case in real life.

Following her death, MCC, the company that runs Litchfield, tries to find a reason Poussey "deserved" to die so they could justify it. But she was never a violent criminal, so they quickly hit a dead end there. MCC then decided to use Bayley as a scapegoat and railroad him for killing Poussey. But at the last second, Warden Caputo hinted at Poussey's invented violence and absolved Bayley of any blame:

"Because we are a woman's camp, [officers'] responsibility is often underestimated; the assumption being that minimum-security women do not pose a physical threat ... The officer responsible, he was set up to fail. He was a victim of circumstance ... Any allegations coming from [the prisoners] or any other source are just not credible. My officer fulfilled his duty, and I defend his actions."

Caputo's pivot led to the prison riot which ended the season. It was clear that the prisoners felt there could never be justice if a victim was blamed for her own murder, especially since Bayley was only put on leave.

"I think Caputo realizes that Bayley is very young and he made a mistake. One second changed his life forever," Aisenberg says of the warden's actions. "I think that pays off in [Episode] 13, where [Caputo] was like, 'Oh [Bayley's] young, this can't define you.'"

But regardless of Caputo's beliefs, Bayley did kill Poussey. His culpability cannot be absolved by any outside circumstances. But as OITNB showed, it's still worth acknowledging all of the pieces of the story. Bayley didn't just go rogue and kill someone; he killed someone after being trained in a system that placed an emphasis on acting first and asking questions later. The guards' violence toward the prisoners escalated all season, culminating with Bayley killing Poussey. Being surrounded by C.O.s originally from the military or maximum security who were constantly talking about the supposedly dangerous inmates seemed to have affected Bayley's own attitude toward the prisoners when the cafeteria protest broke out. While the Bayley of Episode 1 may have taken time to assess the situation before acting with violence, Episode 12 Bayley was conditioned to see the inmates as threats and to respond accordingly. His behavior was the result of a systemic problem, which is something many Black Lives Matter members argue is the problem in the real world. In an article for The Feminist Wire, Alicia Garza, who started Black Lives Matter with two other women, described its purpose:

Black Lives Matter is an ideological and political intervention in a world where Black lives are systematically and intentionally targeted for demise. It is an affirmation of Black folks’ contributions to this society, our humanity, and our resilience in the face of deadly oppression.

Rushing to judgment about a human in a way that jeopardizes their life is unacceptable, and unfortunately still happening way too often in real life. According to MappingPoliceViolence.org, which reviewed 60 of the largest police departments in American cities, 59 of them killed at least one civilian in 2015. Of those 59 departments, the site found that black people were being disproportionately killed, being "41 percent of victims despite being only 20 percent of the population living in these cities." Additionally, 14 of the departments killed exclusively people of color.

I'm glad that the show chose to comment on such a real issue, but I also think it's disconcerting that a scene filmed almost a year ago is still so relevant today. Nothing seems to be changing, and Aisenberg agrees. "The fact that you can open up a newspaper or watch an episode of Orange Is the New Black and the same things are being talked about, that's kind of scary," he says. "That says something about the world ... That's not a good thing. We should be able to prevent this type of thing in the real world."

While showing this type of violence on a TV show is not some magic solution, reminding people of the horror of this type of situation could possibly help motivate people to want to change it. Placing something so devastating on a character everyone cares about may help foster some sympathy in people who have felt disconnected from the issue. Additionally, the manner in which Poussey died speaks volumes. Like many of these real-life casualties, she was not armed, and she was not being aggressive. A mere misunderstanding led to her death, and it could have been prevented by Bayley listening to her rather than jumping to the assumption that she was attacking him.

Hopefully, OITNB can motivate viewers to speak out against racial injustice so that this doesn't happen again. Poussey is a fictional character, and the real people who suffer this type of violence deserve our attention even more.