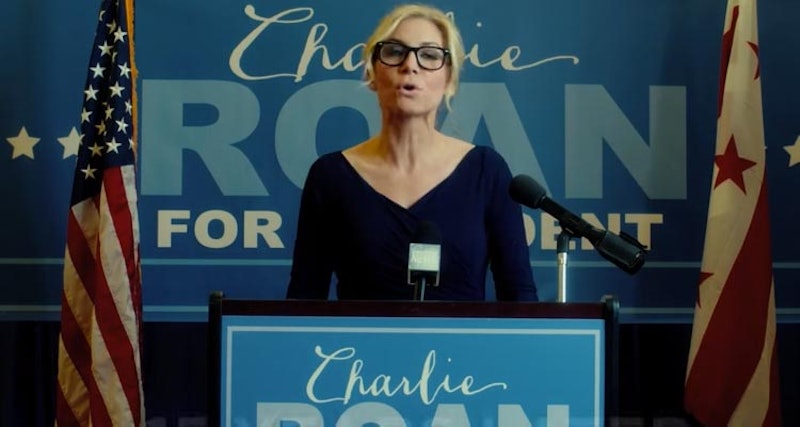 When thinking about the creepiest horror series of the past several years, The Purge definitely comes to mind. In 2013, the first film introduced the terrifying premise of a dystopian USA where all kinds of violence is legalized one night a year. This was followed up by 2014's The Purge: Anarchy, and now The Purge: Election Year is taking things to a whole new level. As you may have guessed from the title, the new movie takes place amidst all the craziness of the U.S. presidential election. It's notable that the film is being released during one of the most tumultuous election years in history, and this has many people wondering what other similarities the movie has to real life. In particular, there has been some discussion questioning whether The Purge: Election Year is about Donald Trump.

This might seem like a crazy speculation, but there is evidence to support the idea that Election Year draws some inspiration from the controversial presidential nominee. For starters, some of the promo spots for the movie take the form of political ads promoting participation in The Purge, with the tagline "Keep America Great." This is obviously similar to Trump's campaign slogan "Make America Great Again." Although filmmakers have not commented on whether or not the tagline is a direct reference to Trump, it is hard to believe that such a similarity would be 100% coincidental.

Director James DeMonaco has commented, though, on the fact that the movie's characters in general seem to resemble some current figures in U.S. politics. He told Entertainment Weekly that, although he wrote the script back in 2014, “Maybe, subconsciously, I knew who was in the playing field.” Said DeMonaco, “Little things drip into you when you’re writing or you’re on set — you’re grabbing from the ether or what’s out there in the press."

Actor Frank Grillo, who plays Sergeant Leo Barnes, said that some of the similarities between the characters and actual politicians weren't overtly intentional. He told CinemaBlend, "Oddly enough, the guy who plays the President in the movie, he plays him like Trump - totally by accident." However, the actor said, the current election did help to inform the new movie, and even inspired its title. Said Grillo, "In the beginning when we shot the movie it wasn't called Purge: Election Year. There's a lot of parallels between the GOP race and the movie and the messages that are being put forward and then Universal got this great idea to call it Purge: Election Year."

Although DeMonaco admitted that there are traces of Trump and other candidates within the movie, he did not give away specifics. The director told Entertainment Weekly, "I’d like to the audience to play with it and see who they feel is representative of the actual candidates in the real world, without me saying who’s who. I think the audience will have a lot of fun saying, ‘Oh, that reminds me of something Donald said!’”

Enjoy comparing the characters of The Purge: Election Year to the figures of the real-life US election, and here's to hoping that every other aspect of the movie will stay firmly in the realm of fiction.