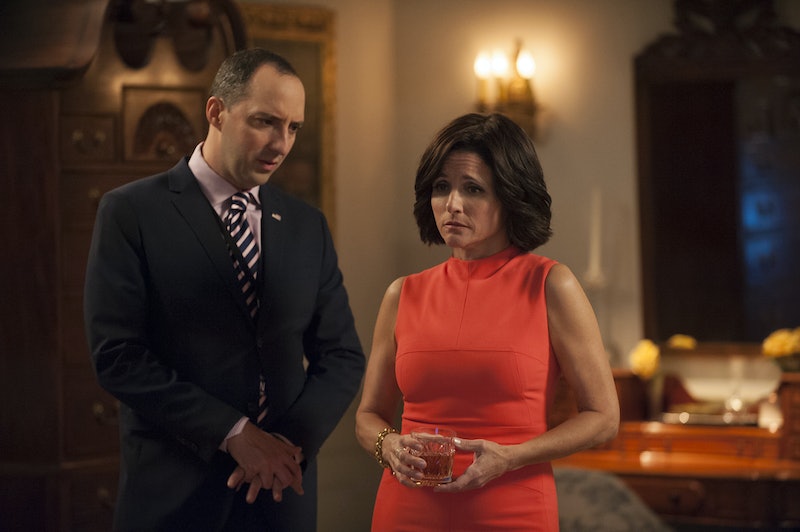 HBO's brilliant, cutting political satire Veep has been full of surprises throughout its first five seasons — from Selina Meyer's unexpected rise to the presidency in the Season 3 finale to the electoral tie in Season 4, the show has never been afraid to throw viewers serious curveballs. But, the Veep Season 5 finale arguably provided the most shocking moment of the entire series when Selina was forced out of the White House entirely and Senator Laura Montez became President. So, what will happen in Veep Season 6 now that Selina (and several members of her long-suffering staff) are jobless?

If you're worried this turn of events means Veep is over, don't despair — the series was renewed less than 24 hours after the Season 5 premiere. But, Season 6 is definitely going to look quite different. During the closing credits, the show seemed to tease the possibility of a Meyer presidency when Bob Bradley casually revealed that those missing Nevada ballots had been found and (surprise!) she had won the state. But, in an interview with Deadline, showrunner David Mandel confirmed that Selina will definitely not be in the White House when Season 6 kicks off. And, although Mandel was sparse with details, I'm willing to go out on a limb and predict that she'll be even more of a terror than usual after this unexpected turn of events.

Mandel also revealed to Deadline that Veep's writers have already begun working on the Season 6 scripts and they're eager to explore the "uncharted territory" of what life will be like for Selina outside the White House gates. "Veep will be the continuing adventures of former president of the United States," he told the outlet.

Based on the Season 5 finale, this means some hilarious things are in store — as Selina spent her final night in the White House, she drunkenly opined to Richard Splett that she doesn't even have a driver's license and she may even need to purchase her own wallet and stamps now. (The horror!) My main takeaway from this scene is that I really hope we get to watch Selina take a driving test in Season 6.

And, let's not forget that Selina isn't exactly held in high regard by the American people. As Kent told her in the finale, she was ranked the 43rd most effective President — just behind James Buchanan, who many believe is responsible for starting the Civil War. (Way to kick a woman when she's down, Kent.) So, watching Selina struggle to adjust to life outside the White House is sure to be cringeworthy in the most hilarious way possible. As Mandel told Deadline:

Selina was a placeholder president who held the job for only a year, and perhaps, in the eyes of many, isn’t perhaps deserving of her round-the-clock Secret Service, of the things that normally go with an ex-president of the United States. These are going to be very hard things for someone like Selina Meyer to hear.

And, no, there won't be a twist that lands Selina back in the White House anytime soon. Mandel told The Hollywood Reporter that, although Sue and Mike will keep their jobs, the show will take place away from The White House "for a while." Selina will be a fish out of water — good old MeeMaw left her home and money to Catherine, which leaves our ex-prez with nowhere to live. And, because her quest for the presidency has been the center of her world for decades, there's also the question of what the heck Selina will do for work in Season 6.

Mandel also told The Hollywood Reporter that showrunners are still deciding whether the Season 6 premiere will pick up the day after Inauguration or six months later. He confirmed the entire cast will return — so we'll get to see how Team Meyer handles her departure from The White House. I'm confident that Dan and Amy will land jobs swiftly (heck, Dan was on the phone with CBS seconds after hearing the bad news), but what about poor, codependent Gary? Mandel told the outlet: "I don’t know anything about season six, except I can tell you this: Gary will be by [Selina's] side. That’s the only thing I do know." Phew.

But, hey, the finale wasn't all bad for Selina — her silver living was, as usual, someone else's misfortune. As it began to rain in D.C. on Inauguration Day, she commented that hopefully the weather would ruin Montez's parade. We can always count on Selina to find the bright side of a rough situation, provided it's at the expense of another person.