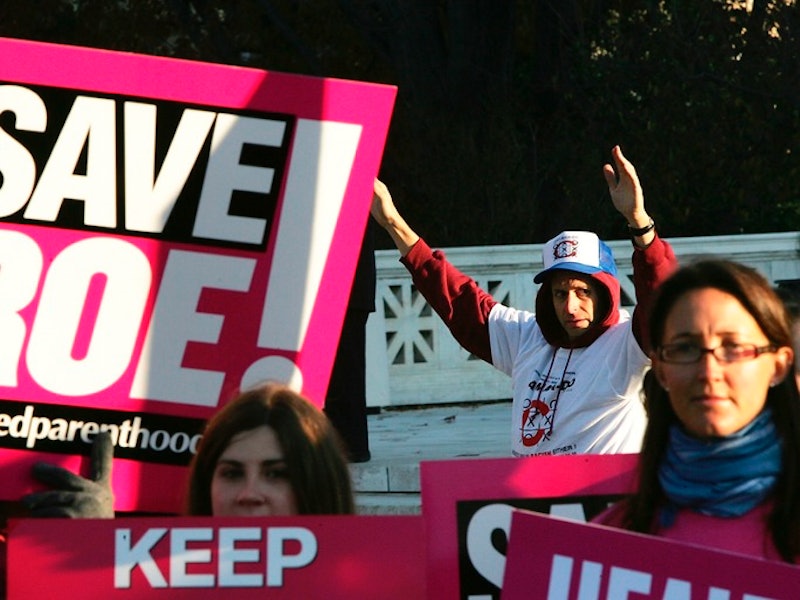 Are you a man who's pro-choice? Good for you, you rock! But there are things you need to know about being a man in what's been pigeonholed as a "women's issue," in which women's voices, experiences, and needs are also routinely discounted by what Tina Fey memorably lambasted as "grey-faced men with $2 haircuts". In a debate where male voices dominate women's bodies, being a man and having an opinion on reproductive rights, even if it's one that supports the female right to choose and control her own reproductive destiny, can be a complex thing. You are deeply, overwhelmingly welcome, and here are some tips on how to understand and navigate your position with diplomacy and consciousness.

As Women's Health Magazine explained eloquently in February 2016, "As access to abortion care is eroded, men are recognizing that they too must speak up in support of maintaining reproductive freedom and the positive impacts access to abortion made on their lives as well." Reproductive rights aren't just a "lady-thing". Empowering women to make choices about their health and bodies through birth control and access to safe abortions is good for everybody. And if you know that even if you're not a woman yourself, you may be wondering how to shout that from the rooftops without accidentally stepping on anybody's toes.

Here are eight things to remember if you're a man fighting for reproductive rights, from the importance of boosting women's voices to the necessity of self-education. You're awesome and I wish you the best of luck.

There are always tricky areas to navigate as an ally rather than the actual subject of a fight for freedom and justice, whether it be as an ally for LGBT activists, Black Lives Matter or, in this case, the reproductive rights of everybody with a uterus. (Those aren't exact parallels, but the central ideal here remains the same.) The main one is this: you should always be conscious of the fact that this is, ultimately, a foreign experience, and that your own perspective and beliefs are support rather than integral to the issue. The fight for reproductive rights is about women being able to control their bodies, so their experience is always the primary evidence. In other words, check your male privilege.

No matter how educated you are about periods, fallopian tubes, the sensation of going to an abortion clinic, or consulting with a doctor about a pregnancy, there is ultimately a fundamental difference between knowing these things and experiencing them as a woman in the world. Giving priority to female experience and needs is basically the point of this issue. It doesn't mean you can't participate and be awesome, or that a woman's right to choose doesn't affect you too (as we'll see below). But it does mean there's a gap you should know about.

If somebody asks "what's this got to do with you," I'm going to guess you'll have an answer. If you don't, develop one. Too often, as ThinkProgress pointed out, "viewing reproductive rights as a women’s issue alone is... in some ways encouraged by outdated parts of masculine culture, and it’s wrong." Acknowledge that this is an issue in which women get to speak first and with personal authority, but have the tools to articulate why this is your issue too, and to educate male friends about why it's something they should know and care about.

You're in this as a massively important ally, but in the grand scheme of things, you're all about supporting another group, not talking over them. Your opinion matters, and matters a lot, but it's not a very fair debate if men are doing all the talking for women. You've got to see yourself as part of a vast array of speakers, many of whom are female and deserve your attention.

This is particularly important because, as Flavorwire pointed out in January, "cisgender men are... the majority of voices on abortion and other related issues in the mainstream media". It turns out that, by the numbers, male voices often dominate the reproductive debate in U.S. media space, marking a sexist divide where female perspectives are seen as less valid or serious. People will listen to your opinion purely because it is male, and that's something to be extremely conscious of.

4. Know How To Respond To Men's Rights Arguments

There are also knotty areas in social discourse surrounding the "reproductive rights" of men, and what their choices are in a woman's pregnancy; Salon, in 2000, laid out the arguments for numerous models of "involvement" in pregnancy choice, from spousal notification laws for abortion (struck down by the Supreme Court in 1992) to the male right to block abortions in female partners (also not enshrined in law anywhere). As a man involved in the fight for women to control their own bodies, it's a good idea to have a thorough understanding of this side of the debate, if only to know you disagree.

You can also learn how to respond to other common anti-choice arguments here.

5. Boost The Voices Of Women

Throw your weight behind women with eloquent perspectives about abortion and the right to reproductive control for women; your support lifts them up. Spread Jessica Wiliams' glorious explanation of why you can't take a fetus to court. Signal boost Rep. Jackie Speier's eloquent pro-choice speech in the House of Representatives. Share the speech of Lakshmi Puri, UN Women Deputy Executive Director, at a 2013 conference in which she stated the summation of the entire reproductive rights movement: "Let us envision a world where reproductive rights are protected, realized and guaranteed — and where women and girls have the means and autonomy to fully exercise those rights without fear of coercion, violence or harm."

And if you're going to share your own experience, be like Mark Ruffalo and talk about the women in your life who've experienced the trauma and horror of being on the "wrong side" of a reproductive law.

6. Educate Yourself On Female Biology

If you're going to work for the rights of women to control their own bodies, it's a good idea to know how those bodies work. What happens in the female body every month, how does an ovulation cycle or a fertilized egg's implantation work, and what happens in the process of a safe, legal abortion? You may not have looked at this since a casual glance in sex ed in high school, but it matters.

If you're going to try and act with authority on behalf of and beside women, you need to know what they're talking about; and you need to be able to bust your own myths. No, women do not have "ways to shut that whole thing down". Yes, illegal abortions are deeply risky, miserable processes and no woman should ever have to go through one. If there are any mysteries or doubts in your knowledge of female reproductive anatomy, get rid of them through research; educated advocates are awesome advocates.

If you hear other people, particularly men, talking nonsense about abortion, women's bodies, or the processes of pregnancy, shut them down. Men should talk about this stuff too, with knowledge and openness, and not let each other perpetuate anything incorrect or unsubstantiated.

There's a male split issue here that's relevant, too: according to the Daily Beast in 2010, pro-life male voices were common in American discourse, while pro-choice male voices were sometimes more difficult to find. Adding your voice to the crowd is a matter of scale. As Seth Millstein wrote on the topic for Bustle in 2014, this raises its own difficulties. "I cringe reflexively at the idea of women being dependent on men, even if it’s to obtain a larger political goal that advances women’s independence in the long run. It just reeks of 'knight-and-shining-armor'-ism, and that’s in direct opposition to most feminist values," he wrote. "But as with any social cause, this fight is ultimately about changing minds, and the more allies you have on your side, the more minds you’re going to change."

8. Don't Be Shy To Show Your Fighting Spirit

As Women's Health pointed out in March 2016, sometimes male pro-choice believers think it's good enough to offer their agreement and then stay out of it. In reality, we need more help. Support can come in many forms, from going to marches to signing petitions to being vocal in public. "They're half the cause, but they're sitting out the battle," lamented Caitlin Abbers for the magazine, and it's a fair point. Part of being involved in this issue is understanding its urgency and the rage behind it, and the necessity for in-depth, serious political action, whether it's discussing it with friends, going grass roots, taking advantage of a public platform like Udonis Haslem or John Stamos, listening to female friends and activists, showing up to landmark Supreme Court rulings, or keeping people updated by spreading NPR's summary of law and abortion rights.

We really do need you, and will welcome your support. Declare your beliefs and see where it takes you.