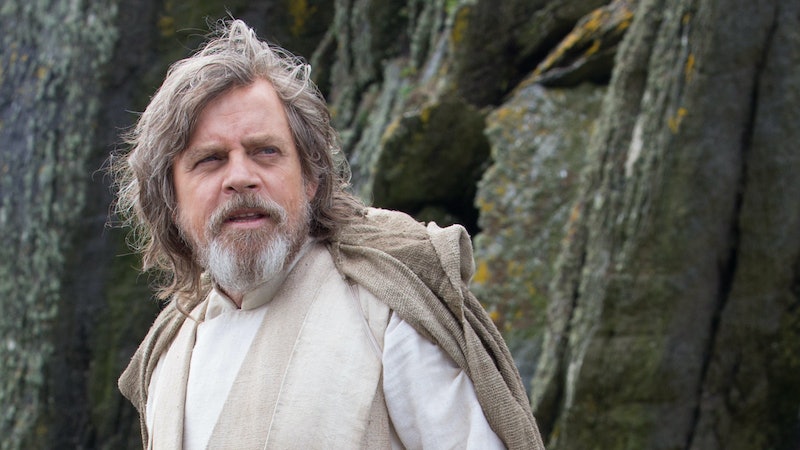 Since Star Wars: The Force Awakens came out in December 2015, fans have been clamoring for a chance to know anything and everything about the next installment. Saturday happens to be our lucky day, though, because the man at the crux of the whole operation — Luke Skywalker — has just given us some crucial info regarding Star Wars: Episode VIII. On Twitter, actor Mark Hamill revealed when the cast and crew of Star Wars: Episode VIII are wrapping things up, and guess what? It's a lot sooner than you'd think. Hamill wrote, "It wraps on Friday July 22nd 2016." You guys. July 22. That's less than a month away.

This means so many things to me. For one, it leads me to believe that Episode VIII will be incredible because production has a ton of time to work with the footage they have. The cast is done filming their scenes, now it's just a matter of editing, adding the musical score, and doing the special effects, all until the film gets released in December 2017. It also leads me to believe that we might be on the cusp of seeing some Episode VIII teaser trailers. (It should go without saying that the prospect of this gives me heart palpations.)

But how close are we to getting our first glimpse at some Star Wars: Episode VIII footage? Well, if you look back at the timeline for Episode VII, things become a bit clearer. In early November 2014, Star Wars: Episode VII filming wrapped. About 25 days later, we got our first official teaser. Lasting about a minute and a half, the teaser held us over until the first official trailer and poster dropped in mid October.

So just to recap, production for The Force Awakens wrapped early in the month, we saw a teaser later in the month, and an official full trailer just a few weeks after that. Are you thinking what I'm thinking? Come July 22, will we be just a few weeks away from a Star Wars: Episode VIII teaser? And just a mere month and a half from an official one?

Because Episode VIII has almost 50 percent more time between production wrapping and its release date than Episode VII had, it's possible that the franchise won't follow this exact trajectory. As time allows them to, maybe they will be more pedantic with the teasers and trailers. But even if we have to wait a little longer to see them, we're not that far off. In fact, we're getting pretty darn close.

Even if a teaser isn't released, I'm gonna go ahead and say that after July 22, we'll be one giant step closer to Episode VIII.

More like this
'Avatar 2' Now Has A Teaser Trailer & Release Date
By Jack Irvin and Alyssa Lapid
Elizabeth Olsen's Chris Evans Friendship Update Was Accidentally Hilarious
By Grace Wehniainen
Wait, Did Wanda Die In 'Doctor Strange And The Multiverse Of Madness'?
By Arya Roshanian
Hayden Panettiere Will Return For 'Scream 6': "We F*cking Won, Scream Fam"
By Jack Irvin and Jake Viswanath
Get Even More From Bustle — Sign Up For The Newsletter