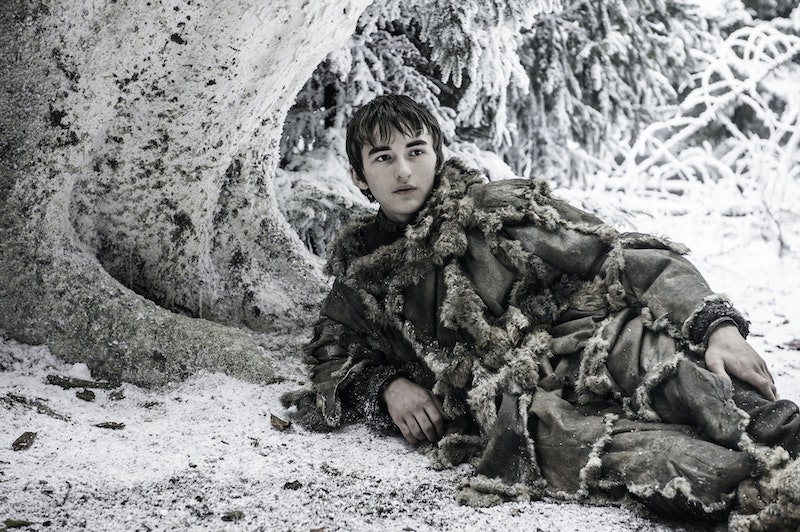 There's reportedly only thirteen episodes of Game of Thrones left, and the series is finally paying off all of its long-developing plotlines. After six seasons of setbacks, Dany left Essos, the Baratheons are officially off of the Iron Throne, and Jon Snow's parentage was just confirmed. And, finally, after a 60-episode approach, it's winter — but what does winter mean in Westeros? After the Season 6 finale, it's clear that Game of Thrones Season 7 is going to show the major differences between Westerosi seasons. The news of winter's presence came via a white raven — as opposed to the usual black version — and was delivered to Sansa, a character so young she probably doesn't have many memories from the previous winter. Because the world of GoT doesn't have set seasons, it's been a long, long time since there's been winter in Westeros.

Another huge difference when it's winter is the ability to produce crops. Seriously, while it might sound boring, it's actually incredibly important. But here's something that should be very memorable: The Tyrells' house words, which are "Growing Strong." The Tyrell family is responsible for growing most of the kingdom's food, particularly grain. In Season 5, Lady Olenna, perennial Thrones MVP, let the High Sparrow know, "When House Tyrell stops sending our crops to the capital, everyone here will starve. And I’ll make sure the hungry know who’s to blame."

So, after Cersei assassinated almost the entire Tyrell family, she closed that source of food from her people, who will not be happy to find out that their queen's personal grudges will make their winter a lot more difficult, even torturous. At this point, it's not even clear just how much money is in the Lannister coffers, since the kingdom was broke way back when Tyrion was temporarily the Hand in Season 2. So, that means that Cersei is queen, but has basically no allies, no food, and, possibly, no money, indefinitely, given that winter is repeatedly stated to last several years. And, of course, the best wine in Westeros is from the Reach and Dorne, so let's hope that she also has huge barrels of that hidden underneath King's Landing.

In a talk between George R.R. Martin and Stephen King, the GoT author attributed the varying length seasons to "magic." And, fittingly, there's some precedent for that magic to have serious consequences — the "Long Night," when White Walkers crossed into Westeros and fought with men, was a winter that lasted a generation. In A Dance with Dragons , Melisandre says, "If the Wall falls, night falls as well, the long night that never ends," meaning that, at least in her visions, it's possible that the Long Night could happen again. And, there are some White Walkers preparing to cross the Wall right now, with only the magic of the Wall stopping them.

But, there is some hope that winter won't bring all bad news. In Game of Thrones , Ned Stark says, "The winters are hard, but the Starks will endure. We always have." This quote from the very first book could be the series' biggest clue so far to what will happen now that winter is finally here. Because the Starks, who once seemed so scattered that their family was doomed, are finally back in Winterfell, Bran seems more in control of his powers, and Arya is back in Westeros. Winter may be bad news for a lot of other families, but it could mean the ascendence of the Starks.