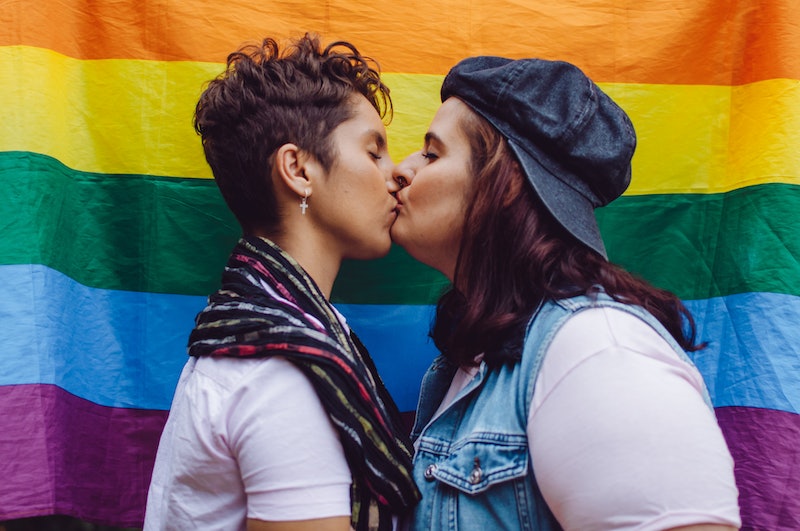 There are a lot of things feminists in general know to be true, but there are also a lot of specific things that queer feminists know to be true, perhaps better than most, when it comes to the feminist movement. In fact, there's an entire set of theories — a sub-movement, so to speak — devoted to what's known as "queer feminism," or the "radical opposition to patriarchy." And indeed, speaking from experience as a queer feminist myself, I find that many queer feminists often take topics within the movement into consideraton in a way that some straight feminists may not — intersectionality, for example. To be clear, this is a good thing; having many different perspectives on one movement helps to strengthen it. The perspective of, say, a trans feminist may open my eyes up to a different part of the movement I never knew existed, while my perspective may open someone else's eyes up to a world they weren't aware of, either. And it's by sharing all these things that specific identities within the movement know to be true that we can make the feminist movement better overall, which will ultimately help us achieve our goals — and do it in a way that will help everyone, no matter who they are.

First, it might be helpful to define what "queer feminism" is. The website Queer Feminism is a terrific resource for learning about the topic; here's what they have to say about it as a general definition:

The term queer does mean that this definition of feminism explicitly includes queer people, but it goes beyond LGBT and other gender/sexuality minorities. By Queer Feminism, we mean a feminism that is different — a feminism that directly challenges [issues like racism, homophobia, transphobia, imperialism, sex-negativity, and similar ills] and does not rest on its laurels. We believe that the definition of feminism that focuses on equality between men and women both excludes non-binary genders and ignores the serious problems created by patriarchy that harm people of any gender and can be exacerbated by people of any gender.

It's an important definition — one that acknowledges that a patriarchal society harms everyone, that there are a huge number of issues at play that many don't realize are feminist issues in the first place, and that intersectionality is absolutely key. It's a similar sentiment to the one now famously penned by Flavia Dzodan: "My feminism will be intersectional or it will be b*llsh*."

So, with that definition in mind, here are seven things queer feminists believe and know to be true — and which, if we all take them to heart, will help make the feminist movement immeasurably stronger.

1. Embracing Sexuality Is An Important Part of Feminism

Many queer feminists understand that discussing women's liberation is linked closely to discussing the liberation of queer women. Too often women whose bodies, politics, or partners don't fit the mainstream ideal are marginalized. But inclusion makes feminism stronger, so embracing sexuality definitely matters.

2. Embracing Different Genders Is An Important Part of Feminism

Trans and gender nonconforming people have historically been left out of the feminist movement, but as is the case with sexualities that don't fit the mainstream ideals, leaving groups of people out is harmful to the very core of feminism: If liberation is the goal, it must be liberation for all people. Although anti-discrimination legislation exists for many groups of people, there is still an incredibly troubling lack of legal protection for LGBTQ people, and trans and gender nonconforming people in particular; for example, people may be denied housing, healthcare, and jobs due to these glaring omissions in the anti-discrimination landscape. Feminism can and should be fighting for these protections — and many others.

3. Many People Are Often Left Out Of The Discussion

Which leads us to the next point:

4. Liberation Cannot Be Achieved Unless It's Collective

It is not enough to care about one group of people, but not another. It's not enough to support the liberation of people who fit a certain ideal or mainstream image, and not support those who don't. Liberation and empowerment cannot be selective. They can only occur when there are no exceptions.

5. Feminism Can Look Different For Everyone, But Intersectionality is Key

It isn't that every feminist must have the same vision. Some feminists might focus more on sex positivity; others might focus on equal pay. Every feminist can have a different set of values and a different way of promoting equality. But at it's very core, feminism must necessarily be intersectional and work to uplift all.

6. You Will Sometimes Disagree With Another Feminist — And That's OK

The more perspectives to which we're exposed and the more views and opinions that are available, the better our understanding of feminism will be. It's not enough to understand what drives one person; we must understand what drives as many people as possible. When the voices of many people are joined together, we hear a wide chorus, rather than one, single voice. And our solutions to the societal problems that affect us all will be stronger for it.

7. The Patriarchy Affects Everyone