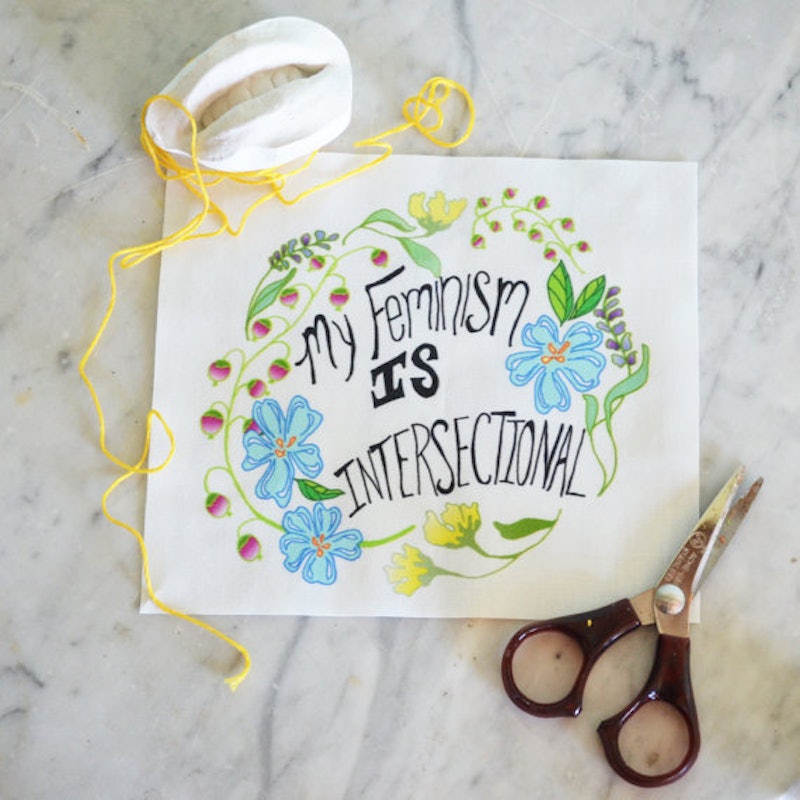 One of my favorite things to say about feminism is this: There's more than one way to be a feminist. Feminism is for everyone, and different people practice their feminism in different ways; plus, no one is perfect, and feminists are no exception to this rule. Some of the things that just aren't OK to do as a feminist are things that this feminist has done in the past. However, if you're a feminist, then you know there are some things informed feminists would never do — because feminism is about freedom and equality, not judgment and misandry.

How someone practices feminism is always going to be shaped by their unique perspective, and as a cis, white woman living in the U.S., my perspective is limited. However, whether you're a non-western feminist, a feminist stay-at-home mom, a feminist of color, a white feminist, a queer-identifying feminist, a feminist man, a religious feminist, or literally any other type of feminist, I think there are certain things that feminists just don't do.

Feminists don't tell other people how to date, speak, or dress. Feminists don't get mad at other feminists for examining gender equality through the lens of racial injustice, socioeconomic privilege, or LGBTQA rights, either. In respecting that feminism comes in all forms and varying perspectives, here are a few things feminists don't do, period.

1. Hate Men Simply For Being Men

In fact, feminists don't make pre-judgments about anyone based on their privilege, because being a feminist means you care about the rights and well-being of all people. Plus, it would be counterproductive for feminists to actively hate all men, not just because it is unfair to make snap judgments about an entire population based on the actions of the few, but also because many feminists are men. (I'm looking at you Ryan Gosling, President Obama, and literally all of my male friends.)

I am ashamed to say that there was a time when I didn't consider trans women to be "real" women. Fortunately, my views on gender identity have evolved in recent years, and I've realized that feminism isn't feminism unless it's inclusive. Feminists don't exclude other women from the feminist movement, whether those women were assigned female at birth or not.

I understand now that trans women are just as female as I am. Even though they might have experienced male privilege at some point in their lives, that doesn't mean they don't know what it is to be a woman, or that their previous male privilege makes up for their lack of cis privilege. Trans women face a whole set of obstacles and injustices that cis women don't even have to think about; their perspective matters. Feminists know that trans women have just as many reasons to be an active part of the feminist movement as cis women do.

3. Look Down On Polyamory

Personally, I really like being monogamous in my relationships. I barely feel capable of maintaining a romantic relationship with one person, and I feel like monogamy is both the physically and emotionally safer option for me. So I'm by no means saying that all feminists have to practice, relate to, or even pretend to understand polyamory.

One thing a feminist should never do, though, is condemn someone else's sexuality and/or relationship preferences, so long as all parties are giving willing and informed consent. Feminism is about women having choices, so if a woman chooses to be polyamorous, the feminist thing to do is respect her decision. Period.

Basically, if it qualifies as slut-shaming, feminists don't do it. Feminists, no matter how they choose to dress or behave themselves, understand that the association of sex and bodily expression with shame is nothing more than a pervasive societal standard meant to oppress women.

Feminists know that all bodies are good bodies, and more importantly, we know that no one's body exists for the viewing pleasure of other people. Of course, this doesn't mean feminists always succeed at being body positive rock stars, because everyone is insecure sometimes. What it does mean is this: Feminists celebrate women's bodies as they are.

Many years ago, I thought discussing feminism through the lens of race was divisive. I was being a "white feminist" — someone who acknowledged my own marginalization without respecting that others are marginalized to an even stronger degree — and I didn't even know it. Fortunately, thanks largely to the internet, I've since realized that the mainstream feminist movement has historically excluded women of color, as well as trans and disabled women. The movement's exclusivity remains a problem to this day in that it doesn't adequately use its platform to address the issues these women face. So much so, in fact, that some women of color don't even feel comfortable identifying as feminists.

Feminists understand that there is no "one size fits all" to feminism — that different people face different struggles, and that our inability to personally relate to another person's struggle by no means makes them less of a priority. Rather than ignore these issues out of convenience or because navigating them makes them uncomfortable, feminists actively seek to understand them and bring all issues, not just their own, the recognition they deserve.

There's no denying that many women in non-western nations are being oppressed. This is fact. Many non-western women in developing nations risk their lives for education, female genital mutilation is still legal in 29 African countries alone, and menstrual education is dangerously lacking in certain parts of India. That said, there's nothing feminist about victimizing non-western women who are not being oppressed, but rather are exercising their ability to choose when they make decisions that don't align with our own cultural norms and associations. Feminism is meant to empower women, and feminists understand that talking about non-western women like they need to be rescued is both condescending and racist.