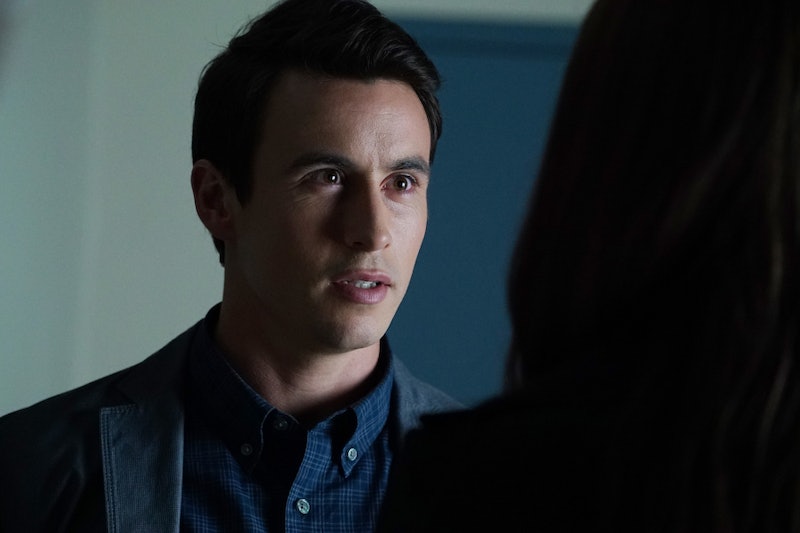 Elliott Rollins and Uber A are currently two of Rosewood's most wanted. But does that mean the two Pretty Little Liars villains are in cahoots? Right now, it's tough to say with any certainty whether Rollins and Uber A are working together, since we don't know who Uber A is yet, and likely won't for a while. Heck, at this point, Rollins and the mysterious figure could technically be one and the same.

That said, it's more likely that Dr. Rollins is working for Uber A, than it is that he's the actual villain. I mean, Ali's new husband is certainly shady enough to be moonlighting for the PLL big bad — and we already know he's joined forces with the enigmatic Mary Drake. But does that mean he's working for Uber A? It's worth pointing out that Mary herself is currently a pretty big Uber A contender. In an interview with Zap2It, I. Marlene King confirmed that the person who kidnapped Hanna (A.D.) and Uber A are the same (a nice, much-needed clarification), and said that both Mary and Dr. Rollins are "our No. 1 suspects" because of their "very ulterior motives."

Now, that's all very well and good, but I think we've all been watching Pretty Little Liars long enough to know pretty definitively that Mary Drake is not actually A.D. First off, Andrea Parker has admitted it herself. As she explained to The Hollywood Reporter, "'AD' is 'Uber A.' My initials are not 'AD.' Mary is not 'Uber A,' but Mary is working with 'Uber A.'" In addition to that, there's the even more damning piece of evidence that the Liars are absolutely convinced that she's A.D. and we all know that historically, whoever they suspect has to be a giant red herring.

Still, even if Rollins has been proven to be working with Mary Drake, and Mary Drake is not A.D., Rollins could definitely still be on the ol' A.D. Team. After all, as Parker explained to The Hollywood Reporter, Mary is working for A.D., and that work could definitely include Rollins. Plus, in the same interview with Zap2It, King also revealed that we'll be spending a good amount of time figuring out all the Carissimi Group shenanigans, a plot that Mary and Rollins are sure to be embroiled in, seeing as it's a big part of the reason they tricked Ali into going into the mental hospital. As King told the website, "We can garner from the last scene with Mary and Elliot that they intend to take back what was theirs, take back that money and use it for very nefarious purposes."

As Pretty Little Liars Season 7 unfolds, things are still very much in the air, so it'll be interesting to see how Rollins factors into all of this Rosewood villainy.

More like this
Penn Badgley & Leighton Meester Met On A Horror Movie Set Before 'Gossip Girl'
By Jake Viswanath
50 Years After Creating Her Alter Ego, Angelyne Is Still Driving That Pink Convertible
By Gretchen Smail
'Atlanta' Season 4 Could Be Here Sooner Than You Think
By Kadin Burnett
Conversations With Friends' Endometriosis Scenes Are As Brutal As It Gets
By Ivana Rihter
Get Even More From Bustle — Sign Up For The Newsletter